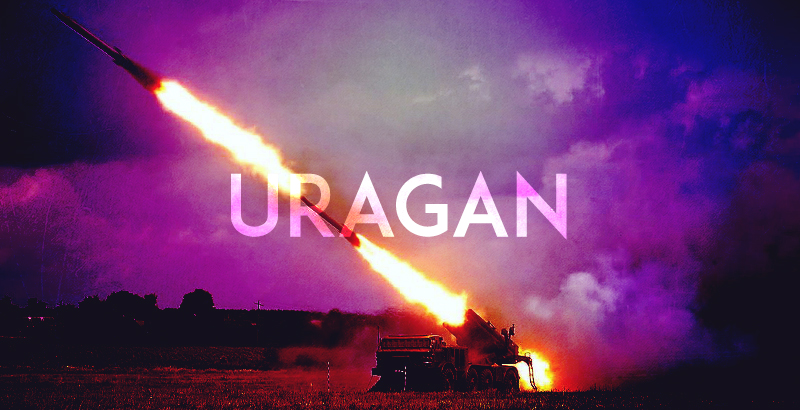 Originally appeared at Rusplt; Translated by Carpatho-Russian exclusively for SouthFront

Current multiple-launch rocket systems (MLRS) are today one of the primary fire weapons of the Land Forces of Russia. Between 1941 and 1945, their well-known ancestress, the Katyusha, brought terror to the German armies and surpassed the Nebelwerfer and Wurfrahmen towed-MLRS installations (brought into operation in 1940) in mobility and range of action. For instant strike on various targets in large areas, the Russian Army is equipped with well-known MLRSes and their modified options Grad (Tornado-G), Uragan, and Smerch (Tornado-S).

Currently the Uragan launch system is considered one of the best known and widespread ones in the armies of the world. The Uragan has convincingly demonstrated its power and effectiveness against targets in actual combat operations in Afghanistan, in the North Caucasus and Ukraine, and in the Middle East and in Africa.

History of its Creation

The 9К57 Uragan MLRS was created at the initiative of the Tula Central Scientific Research Institute for Precision Mechanical Engineering. Based on the M-21 field launch system in the early 1960s, a combat vehicle for rocket artillery, more powerful with respect to fire power and range, was developed here. Using this design foundation (1964), in 1967 the scientific work on “Creation of a high-precision Uragan missile launch system (NV-121-66)” confirmed the possibility of creation of such MLRS with the assigned characteristics.

In the second half of 1968, the preliminary design was developed, and in 1969-1970 the military operational requirements for developmental work were specified. The design provided for creation of combat (BM) and transporter-loader (TZM) vehicles on wheel (ZIL-135ЛМ) and caterpillar (MT-S) chassis. A TZM option based on the KrAZ-253 vehicle was considered also. Hands-on work made it possible to define types of military units for rocket-propelled missiles. Alexander Ganichev was the chief designer of the system as a whole, and Yury Kalachnikov of the combat vehicle. The final version of Uragan MLRS was taken into service since 1975. The Uragan rocket artillery system was serially produced by GNPP [State Research and Production Enterprise] Splav (Tula) between 1975 and 1991. 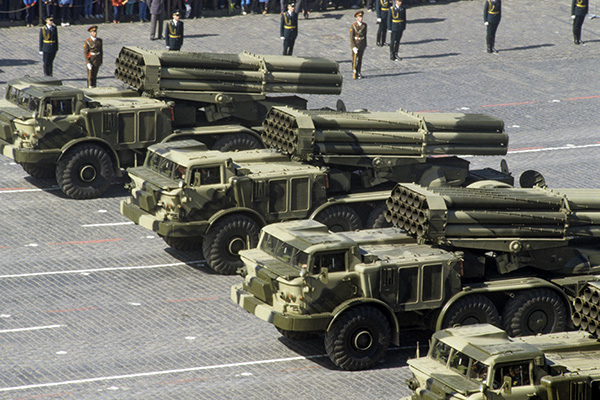 The Soviet 9K57 Uragan multiple-launch rocket system is designed to attack openly positioned and concealed manpower, armor and unarmored equipment, and also area (artillery, rocket and antiaircraft divisions, command points, communication centers, warehouses, basing locations) and other objects of the opponent at ranges from 8-10 to 35 kilometers. In addition, the Uragan rocket system can be used for continuous mining of the district using antipersonnel and anti-tank mines

To resolve the specified tasks, the complex has combat, provision, and educational-training facilities. The Uragan MLRS combat elements include combat (BM, 9P140) and transport-loader (TZM, 9Т452) vehicles, 220-mm rockets, and the Kapustnik-B complex of automated fire management (1V126). Facilities for combat provide a vehicle for topographical mapping (1T12-2M), a radiolocation meteorological complex (1B44), and a set of special arsenal equipment and instrumentation (9F381).

The combat vehicle (launch unit) with combat-loaded weight of 20 tons serves to transport 16 rocket projectiles, and launch and target striking on an area not less than 42 hectares. The artillery part — a unit of 16 tubular guides with aiming adaptations, guidance mechanisms, communication and management — is placed on a four-axle cross-country vehicle ZIL-135LMP chassis (wheel format 8х8). The unit can be oriented to a target in vertical (5-55 degrees) and horizontal (up to 240 degrees) planes. A directional “П”-shaped screw groove give initial rotation to a shell for steady flight on a trajectory. Rockets can be launched by a volley (at an interval of 0.5 seconds) and at “broken” tempo (the first eight at 0.5 seconds interval, and the remainder at 2 seconds interval). The frequency of shaking of the combat vehicle decreased in the latter case, and the accuracy of fire improves. A squad of four people (in peace time) provides transfer of the unit to a combat situation, setting its firing position, and recharging the unit of fire in 3, 1.5, and 15 minutes respectively.

The TZM (9Т452) on similar wheel base provides loading and a launcher-loader unit. The combat vehicle is recharged with a set of 16 rockets within 15 minutes. Fully loaded, the combat vehicle and transporter-loader can move on the highway at a maximum speed up to 65 km/h, and without preliminary preparation traverse fords up to 1.2 meters deep. The fuel supply suffices for a route of 500 kilometers.

The launch unit can use rockets to resolve its tasks, using rocket projectiles with fragmentation and demolition (9М27F), cassette with fragmentation combat elements (9М27K), incendiary (9М27S), and fuel-air explosive (9М51) projectile noses. Depending on the task to be solved, their weight makes is between 89.5 and 99 kg. For long-distance mining of the locale, rocket projectiles with a cassette projectiles nose for anti-tank (9М59) or antipersonnel (9М27K2, 9М27K3) mines are used. The Uragan can use a rocket (9М27D) for demoralization and artillery shock on the enemy using a projectile nose equipped with propaganda materials.

The Uragan artillery rocket system works smoothly at external temperatures from -40 to +50º С, wind up to 20 m/s, high humidity and air dust content, at heights to 3,000 meters above sea level. It can resolve combat issues in the conditions where the enemy uses nuclear, chemical, and biological weapons, at any time of the year and day, in weather and climatic conditions of any region of the world where it can be delivered by any kind of transport. The system is constantly modernized for the purpose of enhanced combat capabilities.

Combat use of the Uragan MLRS

The Uragan MLRS passed its baptism of fire in Afghanistan – the Mujahideen called it the “Shaitan [devil] tube” and very much feared it. The Uragan demonstrated its effectiveness in the UAR and in the war of Syria with Israel in the early 1980s. The fire system was used against illegal paramilitary groups of separatists in the Chechen Republic, and during the Georgian-South Ossetia conflict of 2008. In 2014-2015 the Uragan rocket system on KrAZ-6322 vehicles was actively used by the armed forces of Ukraine in the country’s southeast, as well as by militia who captured some launchers in battle.

The high effectiveness and operational reliability of the Uragan MLRS guarantee its application as a fire strike weapon for the next 10-15 years.