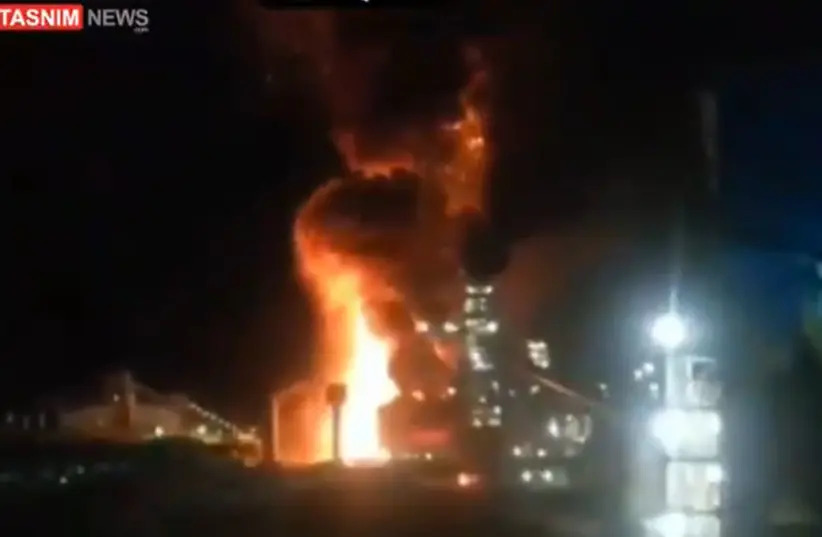 On June 6th, a fire broke out at a steel factory in the Iranian city of Zarand in the central Kerman province.

The accident had reportedly occurred due to the spillage of molten material, Fars news agency quoted Ali Sadeghzadeh, governor of Zarand.

“A sudden overflow of molten material in the blast furnace caused a fire and smoke, and there was no explosion at the furnace site or other parts of the plant,” Sadeqzadeh said, denying earlier reports that an explosion caused the fire.

Sadeqzadeh said fire fighters and emergency crew had remained at the site of the Zarand Iranian Steel Co after the blaze was brought under control and that no casualties were reported.

An interesting twist in the Zarand incident is a report by a local media outlet that said personnel were evacuated as the possibility of an explosion “was predicted hours earlier” and no one was present where the fire broke out. While this cannot be verified, an official of the steel mill said the reason for the incident will be investigated once the fire is completely extinguished.

According to local sources the explosion was so strong that people in villages and surrounding regions of Zarand were jolted.

Despite the fact that several videos on social media show the fire and the explosion, Ali Sadeghzadeh, the governor of Zarand still denies any explosion took place.

On June 2nd, a massive fire had broken out at the Shahid Tondgooyan refinery in Shahr-e-Rey, south of the capital Tehran, state media reported.

Hours before the incident in Shahr-e-Rey, the largest ship in the Iranian navy caught fire and later sank in the Gulf of Oman under unclear circumstances.

In 2020, Iran witnessed a series of mysterious fires and explosions across the country, some of which occurred at sensitive military and nuclear sites.

We are using secret weapons against China and Russia as well 😁

Your fat mother is not a secret weapon kiddo, she/it is a chemical weapon 😂

Fog of War
Reply to  China and Russia wants democracy

China wants Democracy ? Are you high ?

I love seeing kids (A.K.A Zion+Wahhabi+Hindu+Ukranie) hoes crying as if it’s big deal…lol. Get out of your mother’s basement rats, not the Nazi Ukraine guy you stay and die there buddy, ty.

Iran is looking more and more incompetent. It must have foreign agents running around on every street.