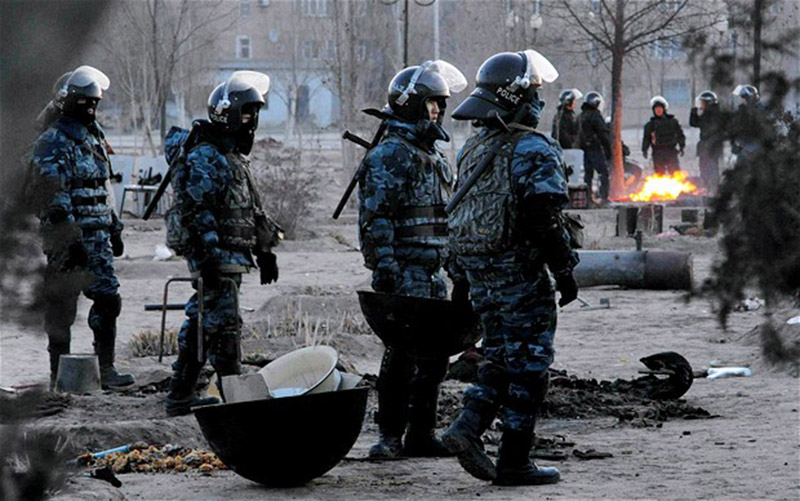 There was unrest in Kazakhstan in May. Whether it was indigenous or not is another matter. In Kazakhstan the full palette of “orange” technologies was observed, The same that were implemented before in Ukraine and Kyrgyzstan. Why? Kazakhstan is a strategic partner of the Russian Federation. There is a huge common border with Russia. Kazakhstan is one of the supporting structures of the Eurasian Economic Union and a key part in the economic belt of the Silk Road.

Obviously, the base is Eurasianism, but Kazakhstan is an important element of the integrational processes initiated by China in Asia. The politico-economic plans of Russia and China are synergistic to some extent. It’s also no secret that Kazakhstan is rich in natural resources. The immediate drudges implementing the “color technology” in Kazakhstan are Ukraine and Turkey.

Naturally, Kiev and Ankara are only the executors. The concepts are made ​​by other strategic centers elsewhere. The Kazakh revolutionaries “craving freedom” are prepared in Ukraine. The striking units of the “revolutionary groups” are trained in Turkey. The prominent Kazakh opposition is not left behind either. They actively cooperate with immigrant groups residing in London. Primarily with the circle around Mukhtar Ablyazov Kabulovich, a former Kazakh energy minister and now businessman and opponent of President Nazarbayev.

The preparation for a “colored revolution” in Kazakhstan has been conducted for a long time. In 2011, workers from the oil industry in the town of Zhanaozen groomed a rebellion that could not acquire a national character. The reason for the unrest were unpaid salaries. There was other unrest, mostly for social reasons, which did not affect the internal politics of the country.

The last parliamentary elections held in Kazakhstan were in March 2016. The head of the mission of the OSCE Office for Democratic Institutions and Human Rights Boris Ferlits who was a former Foreign Minister of Slovenia was not pleased with the organization of the vote. According to him, “the voters are faced with an insufficient political choice.” And the global conceptualists decided to “help awaken” democracy in Kazakhstan. The Kazakh government does provide them with fuel. The main themes leading the “revolutionaries” to rebellion are the time tested outrages of the “ruling family” as well as “social injustice.” It was hardl reasonable for the authorities in Kazakhstan to build the Pantheon of national heroes, in fact a cemetery for the elite in the populated Kabanbay Batyr, which is located 17 kilometers from Astana. The cost of the memorial is 79 billion tenge (1 € = 378 tenge). The decision to increase the retirement age was not received well by the public either.

There was a serious attempt to excite mass unrest already in April 2016 in the West Kazakhstan region. Then, activists from the public association “Abiroy” attempted to organize illegal mass protests. Provocative calls were spread. The technology to trigger mass unrest in Kazakhstan absolutely replicates the model of the Maidan in Kiev. Overall, nothing new under the sun. Ukrainian radicals train their Kazakh counterparts. It is reported that Kazakhs “revolutionaries” are trained in revolutionary activities in the camps Koncha Zaspa, Nikolayev and Dnepropetrovsk, located on Ukrainian territory.

Of particular concern to the leadership of Kazakhstan were alerts of a supply of arms in Almaty and Astana. Sharply stepped up were calls for removing Nazarbayev on the social networks. The reason for the unrest of May 21, 2016 in Almaty was the discontent of the population in connection with the adopted amendments to land reform. Logistics immediately before the events in Kazakhstan were provided by the International Fund for protection of freedom of speech “Adel CO”, whose donors are the embassies of the US and UK, George Soros’s “Open society”, Freedom House and the National Endowment for Democracy (NED).

In general the local population does not sufficiently understand the legislative changes and is relatively easy to manipulate. Its enough for a number of “analysts”, “experts” and “witnesses” to “confirm” that they have personally “seen Kazakh officials lead the Chinese around, so they can buy land around Medeo”. Then theanger comes naturally. It is true that the vast lands of Kazakhstan used extremely ineffectively. Only 1 million hectares are in private hands, while the remaining 99 million are leased. Amendments to the Land Reform will allow tenants to buy land on preferential terms. The opposition enjoys “the willingness of the authorities to sell land to foreigners,” primarily to the Chinese. Kazakhs fear the Chinese, they don’t love them very much. Of course, no shortage of outrage is provided due to local officials who sell the most beautiful lands to “their people.” Every country has genuine grievances of the population. In some cases they are used. In other, they are not. Very significant is the manifesto of businessman and publicist Margulan Seysembaev, released on social media: “What are we afraid of?”

From a few things. The first threat, unused land speculation with the land, unreal rise in the price of land, the wasting of resources. The second threat, invasion of the “yellow men”, the expansion of migration, Chinatowns, marriages with Chinese, the poisoning of the earth with chemicals. Margulan Seysembaev proposes to ban Chinese companies and Chinese individuals from buying and from being leased land for agriculture in Kazakhstan. To introduce strict public control of immigration and the stay of the Chinese nationals. The third threat, a Russian invasion by a Ukrainian scenario with the use of “green men”. Margulan Seysembaev proposes to ban Russian companies and Russians from buying and leasing of agricultural land in the north, bordering the Russian Federation regions. To limit the presence of Russian TV channels in Kazakhstan. To promote the presence of Ukrainian TV stations in the republic.

What Russian and Ukrainian televisions have to do with land reform, only Malgulan Seysembaev knows. The same half-wit logic was previously used in social networks and by the Ukrainian activists of the Maidan. After accusations that “Nazarbayev sells land to the Chinese” followed charges of “conducting ill-considered foreign policy.” As an error was given the example of the participation of Kazakhstan in the Eurasian Economic Union. The government tried to respond by creating the Public Commission for land reform. The energy of the “revolutionaries” reached a critical point and clashes with the police began. The slogans of protesters was in the best traditions of the Maidan: “Shal ket” (“Old man, leave”).

Thus was revealed the main purpose of the organized insurrection – the removal of President Nazarbayev. Naturally, the police discovered warehouses with weapons, “Molotov” cocktails, appropriately bent valves and other attributes allowing for the “democratic” representation of the Kazakh people. There were appeals to the police to “join the people”, as well as calls to collect data on police so there can be a “complete revenge” later on. The police in Kazakhstan decisively cut down the “color revolution”, arrested the organizers, gathered the weapons and other support “materials” and the “revolution” was over at noon. And everybody went to drink tea. Those who have watched the events of 2014 in Kiev, can not help but appreciate the attempted Maidan in Kazakhstan as “smiles from the old tapes.”

Briefly, there was a failed coup in Kazakhstan presented as a “fair uprising of the people”. Compare the events and demonstrations of dissatisfied people in France with the one in Kazakhstan. We had the opportunity to observe both in parallel over time. You don’t need three feet of forehead to uncover significant differences.

The main conclusion is that the economic reintegration of the former Soviet Union in the Eurasian Economic Union is actually a harbinger of a political Eurasian Union. We are observing a huge geopolitical struggle in Central Asia. All methods are allowed. “Color revolutions” are the least of them. The future of the world will depend on this geopolitical struggle in Central Asia.

Nazarbayev ain´t a p***y, that is why the “color revolution” failed, not like in the “ukraine” where troubles where allowed to brew for a long time before Maidan.

Hope he´ll make the authorities more vigilant now, because there will be other attempts, support for both jihadist and “democratic” terrorist groups etc.

Those opposition traitors (receiving money and instructions from USA) have to be dealt with.

Yes, But it is not everyday Americans who support this. Only the globalist glass who like mass immigration and other Zionist policies. American Patriots believe that every nation has the right to be self governed without outside interference.