USA went through with new sanctions against Russia, but Europe seriously considers to cancel theirs. 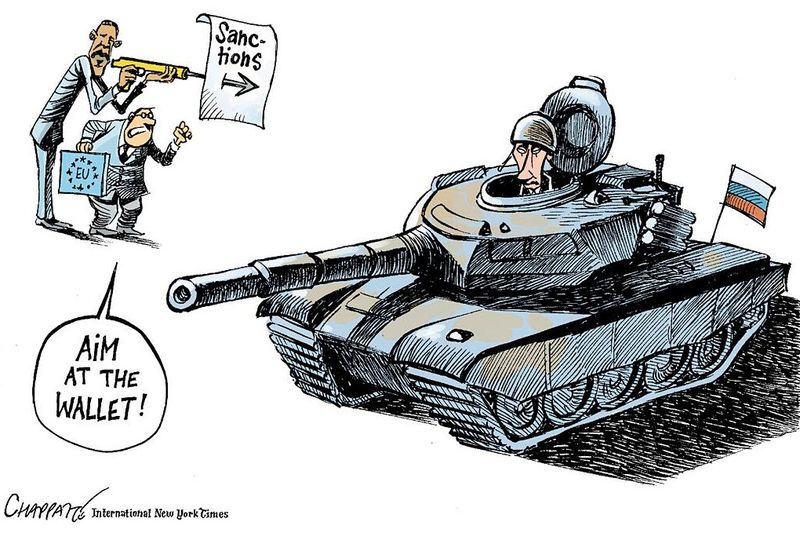 The news about new American sanctions caused a very sharp reaction in Moscow. “It is unfortunate, that despite rational thinking, the need for cooperation and growth of the relationship Washington chose the position that contradicts the need of our relationship”, – presidential press secretary Dmitry Peskov commented on this new hostile move from Washington and promised that the Kremlin “will accumulate suggestions to countering measures”.

It is plausible, that the most unpleasant side of this development are not the economic consequences of these sanctions and possible results of antisanctions. It is evident, that Obama administration doesn’t have consensus around which political line to take with regards to Russia. The last visit of US state secretary to Moscow, common initiative of the two countries over the Security Council’s Syria resolution, that was accepted only on 18th of December, it created some hopes in warming up the Russo-American relations.

We can spend a long time talking about American deception, increasing pressure of the Republican Party on the White House, the upcoming presidential election campaign, in which the current administratiion is being chucked out of the frying pan and into the fire. But, it seems, we are witnessing a system crysis in American politics. The previous, Republican team of George Bush-junior, was also thrown from side to side. This is why we shouldn’t discount this as just the outcome of Obama’s indecisiveness.

In reality, it is very difficult to determine where one administration’s party line ends and chaotic behind-the-scenes gaming begins, between the pacifist and warmongering factions in the US government. In any case White House’s capability to make rational and responsible decisions on a state level is increasingly under doubt. And this situation creates many political risks in the world.

The motives behind American toughening of the sanctions are now understood differently. The lack of anything new causes the American government to simply hit the same spot over and over again. In the press release of the US Justice Department there is a link to the OFAC director John Smith’s announcement: “It is of critical importance that Russia takes necessary steps to complete her obligations under Minsk agreements”. However this announcement cannot have any coherent meaning anymore because of the obvious change of public opinion in the world around the subject of who really is to blame for Minsk-2’s failure.

Let’s quickly note the fact that sanctions against Sberbank are toughened: there are nine more structures placed under limitations. Because of this, it is still unclear why is German Gref unwilling to work in Crimea, but instead talks to Sergei Aksenov about involving a friendly holding “KiPiAi”, which is willing to take part in the strategic development of the peninsula. But there is no difference that can be made for the Sberbank anymore – it is still deeper in the black list.
Meanwhile, “German government did not react to rumours about a Russian company, 65% shares of which belong to Siemens, making a deal to build gas pipes for Crimean power plants. Formally, this agreement doesn’t break any sanctions, but it is contrary to sanctions’ spirit”, – this is a vivid example of the real situation in the business community of Europe, brought to us by a Bloomberg columnist Leonid Bershidskiy. Angela Merkel, who provoked the European Union to prolong antirussian sanctions, is herself looking away from German companies’ business affairs with Russia.

Most of Europe’s and Americans politicians are Zionist-Bigots these days. The Founding Fathers were kind and wise. They believed in fairness, and letting people around the world govern themselves without interference.

Can’t see the point of referring to ancient history and what is an utterly failed system with no checks and balances and a pointless constitution.

A failed system that the rest of the world has to try and deal with. The US is practicing genocide against the peoples of different nations. They would have killed millions of Russians and Chinese if these countries were not armed with big nukes.

A failed corrupted system do not destroy the words and philosophy which define freedom. Without a philosophy of what defines freedom you cannot be free. People like Hồ Chí Minh read their words and lead his people to freedom against the very nations which now proclaim once more to be leading a global fight to bring freedom to others.

If you believe that then you will believe anything since both Europe and the US are failed states and have about as much liberty as a North Korean.

Most of them have never read anything spoken by President Washington, let alone written by Thomas Jefferson, Patrick Henry, Franklin, Adams, or a long list of other peoples who managed to break free from tyranny.

People are no different in America than they are in Russia, China, or Africa and that’s not a good thing. How will we have liberty if we don’t even know what defines liberty?

That to me is why those words of these people still matter.