The A-545 is a successor to the earlier AEK-971 assault rifle. The original design was developed at the Kovrov Mechanical Plant by chief designer Sergey Koksharov in the late 1970s.

In 2014, both the A-545 and the AK-12 passed state trials of the infantry combat system ‘Ratnik’. In 2015, Russia introduced the A-545 for service  with select operation units alongside the competing AK-12. 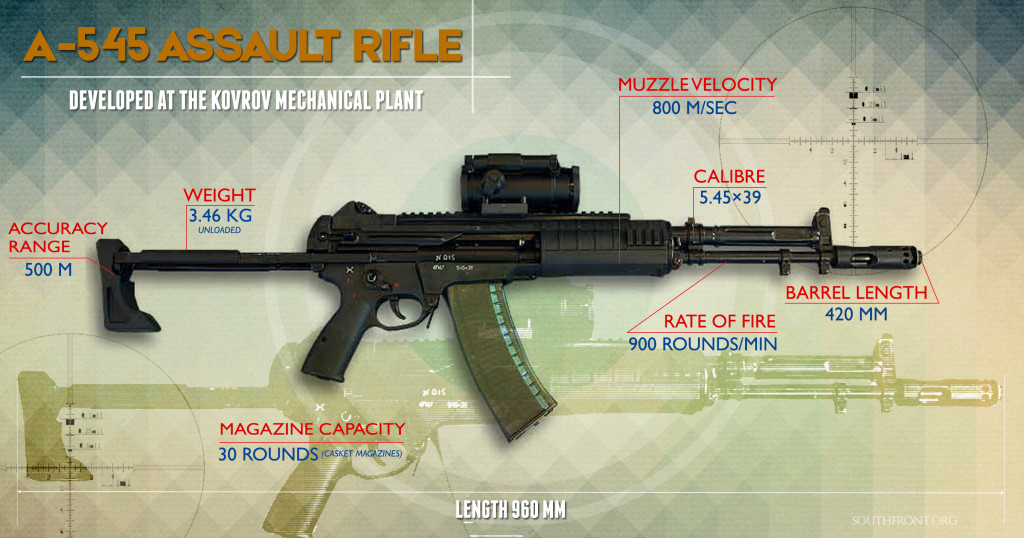 This number is 500m. Thank you for the feedback. The image will be improved soon.

it is a correction rather than a improvement. Southfront should be brave to accept even a small mistake, that will differentiate them fom major Media.

SF Team is glad to receive the feedback from the audeience and we always use it to improve (or correct) our content.

so this is the answer to the question never asked?

so no one ever asked to reduce muzzle climb on an Assault Rifle?

It is a fascinating rifle design and beyond it’s obvious usefulness as it is, it is interesting to contemplate that the recoil reduction mechanism built into it could also be used to design an assault rifle that used a full-power WWII rifle cartridge and still had some controllability in fully automatic. In addition to long-range ballistics issues NATO has encountered in Afghanistan, returning to a more powerful cartridge may become ever more relevant as body armour continues to improve and proliferate. When you compare it to the various rifles in use in NATO, it is quite obvious that Russia does not lack for innovative small arms design, contrary to the tired old stereotype about Russian weapons being unbreakable but low-tech. The only assault rifle to have demonstrated a comparable level of innovation is the cancelled G11.