Since the end of the Cold War, a new paradigm of international politics has emerged, one characterised by interventions and unilateral action. 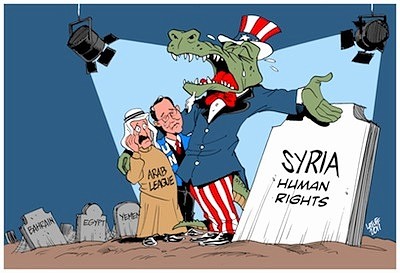 Most of us that hear the word “humanitarian” being used in the same sentence as “intervention”, view it as a positive move towards saving lives and establishing (or re-establishing) peace. Often this involves Washington portraying the targeted country’s leadership as “mass murderers” and “gross human rights abusers.”

Washington also uses its powerful NGO’s such as Amnesty International and Human Rights Watch to reinforce their claims. Of course, Washington is the savior in this narrative, with the responsibilty to protect the people of the targeted country from their “murderous regime.” This propaganda is often echoed throughout Western media outlets when trying to justify another foreign NATO adventure.