On Wednesday, the US-backed Syrian Democratic Forces (SDF) captured several government buildings including the former headquarter of the Syrian Police and the Civil Affairs building in al-Moror district in the western part of Raqqa city. SDF also announced that its fighters killed 47 ISIS fighters during their advance.

The Syrian-Kurdish Hawar News Agency (ANHA) announced that 65% of Raqqa city was under SDF control.

Earlier the Kurdish People’s Defence Units (YPG) claimed in a statement describing the recent achievements of the YPG and its female version YPJ that the Kurdish-led Syrian Democratic Forces (SDF) killed 1,244 ISIS members and destroyed 28 car bombs in clashes in the city of Raqqah in August, 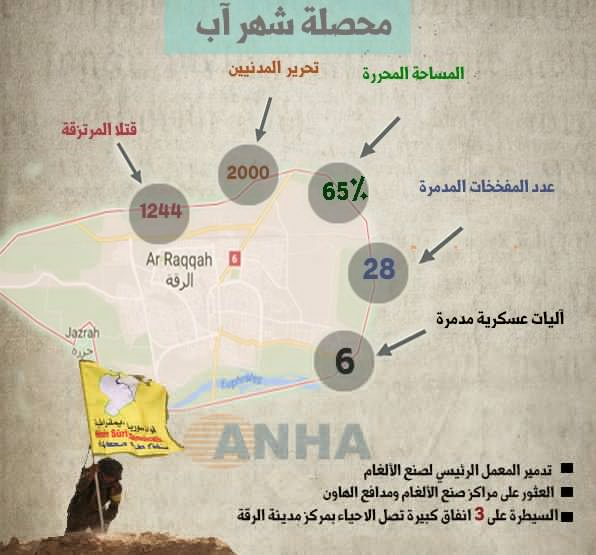 SDF is now advancing inside 23 Shevat -February 23- district in the western part of Raqqa. SDF has   already captured many locations of the district according to Kurdish sources. The sources added that SDF fighters were able to besieged groups of ISIS fighters in and al-Moro and al-Barid districts.

Syrian Opposition sources claimed that US-led collation warplanes conducted more than 75 airstrikes on the city of Raqqa in the last 48 hours in support of the SDF.

On Tuesday, the-ISIS linked news agency Amaq published a new video release of ISIS about Raqqa battle called “Inahum Muqraqun” – “They Are Drowning”. In the release Amaq shows the destruction caused by the US-led collation airstrike on Raqqa.

These government buildings belong to the Syrian Government and, not the SDF?

All of Syria belongs to all the Syrian people. SDF don’t own any of it.

As SDF is composed of Syrians, everything within Syria belongs to the the SDF, as it does to other Syrians.

Read what I put. It’s grammatically correct. ALL of Syria, belongs to ALL syrians.

So no everything within syria does not belong to the SDF. That’s like saying all Englang belongs to the English so everything belongs to me. Faulty logic or poor grammar. Either way you are wrong.

Everything within Syria belongs to SDF as co-owners. Just as the other Syrians are co-owners too. All excluding private property of course.

Cool by your logic I own everything in England.

You just don’t have a brain!

If the Syrian government, as “owner” of the buildings objects to SDF liberating them, then the government should have seen to it that those buildings, the city, the countryside, could not have been taken by IS and other islamists.

Providing security is the first and oldest obligation of a state towards its citizens. Surprise : this state failed.

WTF? You must be another asshole SF troll that has shit for brains!

Is this actually Raqqa, in the Amaq link? And is it Raqqa in the last few weeks?

The IS video show pictures of bombs being dropped by the drones. Wonder where they got them. I also wonder why there are no pictures of the drones themselves.

Here’s a thought: Did McCain arm Syrian rebels with drones, which have since got into the hands of IS? Are these the drones destroying buildings and civilians in ar-Raqqa?

SDF does have to install some rethinking into many arab minds. But they will learn that girls, kurds, are equal to arab boys and have the same rights. If they do not, they will have to relocate to either IS or Assad held lands.