A video of an interview with Bana Alabed, the so-called ‘7 year old Twitter blogger from Aleppo’, has once again proved the fact that the girl has nothing to do with her Tweets. 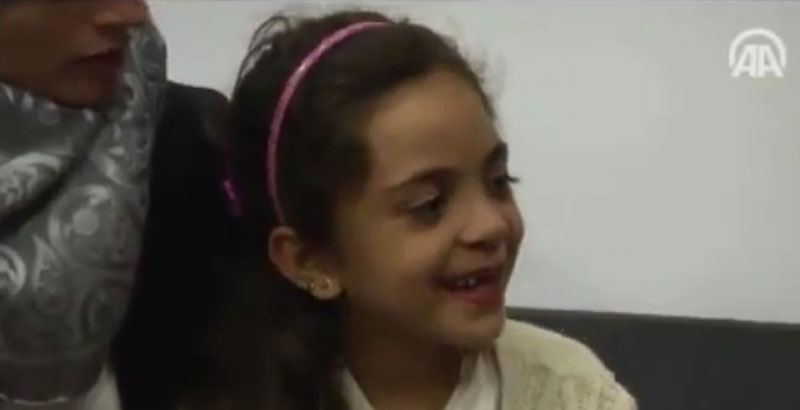 Bana Alabed, the so-called ‘7 year old Twitter blogger from Aleppo’, who was spreading a pro-militant propaganda about the situation in the Syrian city of Aleppo, gave an interview to the Turkish Anadolu news agency. A video of the interview was published online.

The video shows Bana, sitting on the lap of her mother and telling about ‘terrible atrocities’ of Syrian soldiers, who, according to the girl, kill children in the city, and the Russian Aerospace Forces, bombing innocent civilians there. However, the footage clearly shows that in the most cases, Bana just does not know what to answer the questions of a journalist. The girl looks at her mother and the latter whispers ‘right answers’ in her ear. However, this fact did not prevent the news agency to publish the interview and tell its readers about ‘war crimes’ of the regime’s forces and Russians.

This fact just once again proves that the girl has nothing to do with her Tweets, which obviously was written by her mother, linked with local militants, who used her daughter like a tool of the propaganda.

Bana has no thoughts or opinions of her own&had nothing to do w/the tweets. Watch Fatemah give her all the answers.Child manipulation #Syria pic.twitter.com/l2TbNUCTnG

Earlier, SouthFront told about the meeting of Bana and Turkey’s President Recep Tayyip Erdogan, who allegedly sent a special representative to Syria to take Bana and her family to Turkey.

where is the video?

The video is there

They were never in Aleppo, its quite obvious, they would of been in Turkey in the studio next to the white helmets.

The terrorists are losing the propaganda war too.

when propaganda loses, it’s because it faces the truth.

Clueless idiot go back to CNN

Why is this not a surprize?

LOL well that was subtle!!!!

The family get paid handsomely for each appearance. They do their best. As propaganda it is ridiculous, and psychological abuse of a child.

She was not in Aleppo and only came down for the shoots.

it’s enough for allahakbaring arabs and brainwashed westerners. Sometimes propaganda just needs to give people an excuse to stay ignorant, and children are the top subject in that logic.

This shouldn’t be considered as “news”, simply a final confirmation of the fucking obvious. Her tweets were written by jihadi propagandists and distributed with her images. Western MSM pressitutes are no doubt aware of the truth (they are not actually stupid despite appearances) yet the feckless lying bastards don’t care and use her agitprop regardless.

And the oscar goes to…..

anyone other than Bana and family! :)

So, this is how Erdogan reconciles with Russia, by churning out yet more stories of Russian bombs and “regime” forces slaughtering children? Can not wait to see his duplicitous head removed from his carcass.

They were never in East Aleppo!

These same Western governments who pay these people, run by the same Freemasons, used propaganda exactly this flimsy as ‘evidence’ in war crimes trials of SS officers at the end of the Second Qworld War, as a number of Allied military attorneys and at least one judge, along with Senator Joseph McCarthy (not the bad guy you’ve been told he was), bitterly complained about. Same old tricks, endlessly repeated, just like The Saker has noted repeatedly.