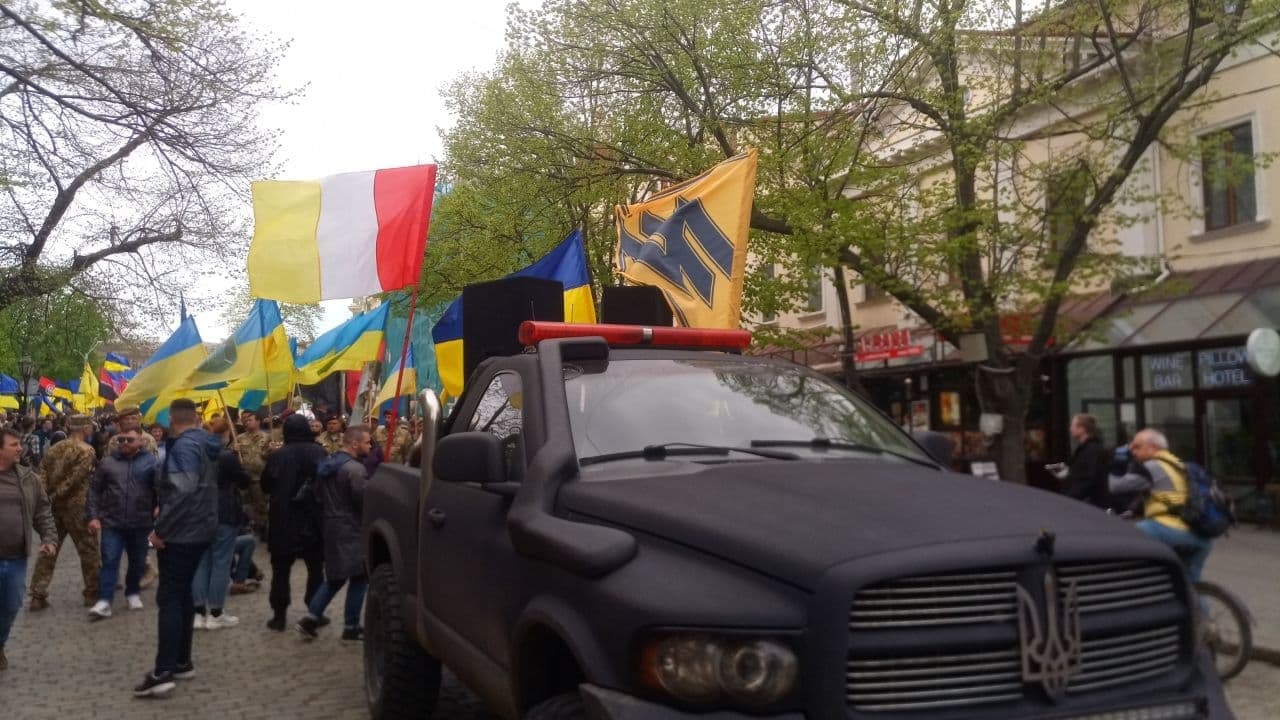 On May 2nd, nationalists and veterans from the Volunteer battalions carried out a march in Odessa.

Ukrainian outlet Strana reported that hundreds of people gathered at the Cathedral Square. They brought with them the flags of Ukraine and the “Right Sector”. Some of them were dressed in camo.

Members of radical nationalist organizations rallied with the flags of football ultras, the flag of Odessa and more.

Their procession was headed by a black truck, which played nationalist tunes from loudspeakers. The vehicle was decorated with a flag that had a ‘Wolfsangel’ on it – a historic heraldic symbol, which had also been used by the Nazis as an insignia for several SS divisions. During the conflict in eastern Ukraine, it appeared on the banners of the Azov volunteer battalion, which fought on the side of Kiev authorities.

It happened on the day of commemoration of the seventh anniversary of the massacres on the Kulikovo field, enhanced security measures are in place, and the security forces have even been pulled into the city from the Kiev region.

On May 2, 2014 in Odessa there were clashes between the supporters of the Maidan and its opponents. The culmination was a fire in the House of Trade Unions, where dozens of “Kulikovites” – Odessa opponents of the Maidan, were burned to death. The death of 48 people was confirmed, and several hundred more were injured.

The nationalists were allowed to rally and demonstrate to their hearts content and there was no issue.

Those wishing to commemorate the deaths that took place on May 2nd, had to deal with police barricades, inspections and disinfection.

The Kiev authorities explained the obstacles they created by anti-epidemic requirements, although a march of radicals and nationalists is taking place in the city, marching without police cordons, masks and keeping a distance.

In Odessa, those wishing to honor the memory of those who died on May 2, 2014 were given the most humiliating entry procedure. They are allowed to enter the Kulikovo field after checking with a metal detector and inspecting personal belongings, the channel writes.

One of the women began to resent the check, after which she was supported by one of the men. The police forced him to turn out his pockets and show their contents. Also, access to the field is regularly closed for sanitation.

“Note that there are no such security measures at the march of nationalists in Odessa. No one is watching either the explosives or the quarantine,” the Politika Stranyi telegram channel said.

“There is a principle which is a bar against all information, which is proof against all arguments, and which cannot fail to keep a man in everlasting ignorance — that principle is contempt prior to investigation.” — Herbert Spencer

Please read about them from their own sources instead of relying upon the widespread lies about them.

Alternatively you can find videos about these subjects on

Some great channels include:

The hooligans in Ukraine are ideologically ignorant about the ideology that they claim to follow and are likely infiltrated by the CIA, and possibly Russian SVN. They had infiltrated other white nationalist groups following the deaths of George Lincoln Rockwell (1918-1967) and William Luther Pierce (1933-2002).

Video on any of the aforementioned video sharing platforms:

– The Life and Times of George Lincoln Rockwell (+ Books)

“Luciferianism” originates as a term used by the church to destroy anything which is not Jewish or Christian. The church before and after the East-West schism had taken legitimate pagan religions and spiritual beliefs for the purpose of inverting them and murdering disbelievers, or anyone who refused religious conversion to Christianity.

This is despite both the Catholic and Orthodox churches never abandoning the esoteric symbolism and rituals adopted by the Roman elite associated with Mithraism, Hermeticism, Theosophy, et cetera. Aleister Crowley’s pseudo-religion known as ‘Thelema’ received some inspiration from Theosophy.

I was told by someone in Odessa that those protestors threw Molotov cocktails at each other and burned themselves to death. Of course I was seeing things when I told him I saw people jumping off the building to escape the flames then being attacked and beaten severely when they landed on the ground . He was also telling me months ago that those people in Donetsk and Lugansk were attacking innocent Ukrainian servicemen which was causing the need to send reinforcements to defend them.. Not sure which one of the marches he is but he would be carrying the Right Sector flag. Extreme nut job.

Will never forget that day, watching it all and horrified something so evil could be accepted by the media and our leaders, in Europe and the West. How low do you go? RIP and never forgotten.

Of course the Ukronazi’s are ignorant, they only wish to project their own anger and suffering onto the helpless with hope that they are rewarded and come out on top.

As far as I know, the Roman Elite couldn’t stand the Pagan worship of the commoners. But with the fall of the Roman Empire, the Roman-Catholic Church emerged, with a sanitised version of Luciferianism. These people are nothing but two-faced. I hold Dugin in the same regard.