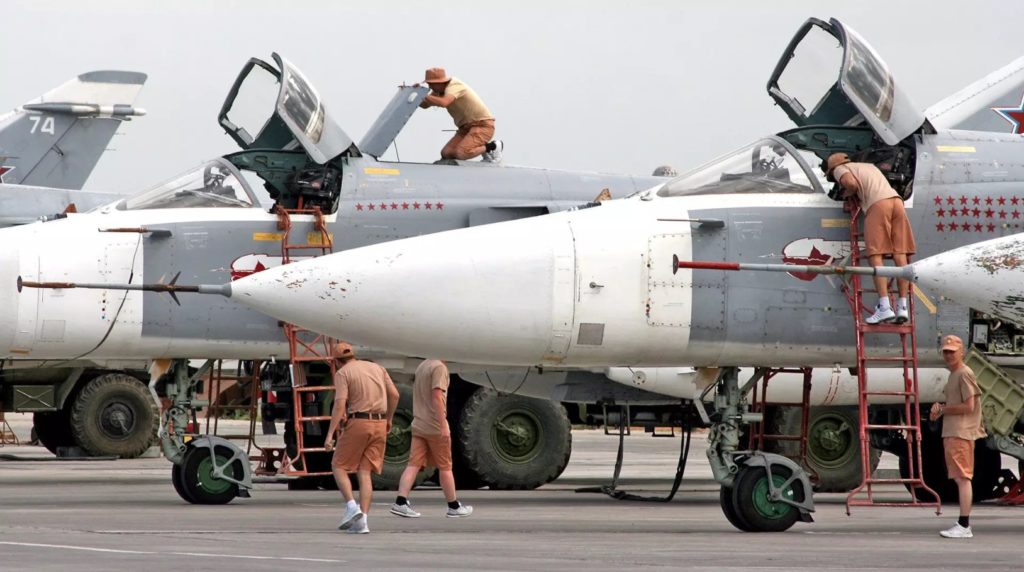 UPDATE: On January 4, the Russian Defense Ministry confirmed mortar attack by “a mobile militant subversive group” on Khmeimim air base and the death of 2 military servicemen, but denied any equipment damage.

The Russian daily Kommersant reported on January 3 that Russia’s Khmeimim air base was shelled by militants on December 31. According to Kommersant, four Su-24 attack aircraft, two Su-35S multi-role fighters and one An-72 transport aircraft were destroyed as a result of the shelling. The daily added that 9 service members may received injures.

The Russian Defense Ministry has not commented the report yet.

However, the ministry said in a statement that on the same day a Russian Mi-24 helicopter crashed due to a technical fault near the Syrian Hama military airfield. Both pilots died. The engineer got injuries and the rescue team sent him to Khmeimim, where he received necessary assistance. The statement denied that the helicopter had come under fire.

This is a huge loss of aircraft considering they only have a small force. Air defences are not much good against ground shelling

i think the aircraft loss is fake news.

The balls on these little bastards. They don’t know when they’re beaten. Russia please remind them in no uncertain terms. With fire and lead.

Or merely victims of fake news?

Kommersant is an anti-Putin newspaper. This should be taken with a huge grain of salt.

Kommersant is a western backed newspaper in Russia.

If so, it is a Western/Nato anti-Russian propaganda wing and it should be closed down!

There’s no need to touch any foreign media in Russia, Putin and the rest of the Russian government aren’t short-sighted and would never make such a mistake; it would only make them look bad. Besides, his popularity is nearly 90%, he also enjoys sizable popularity abroad.

You are right but still, all the seditious media that are spreading U$ and Western-sponsored propaganda that is anti-Russian should be immediately shut down. Nothing good will come out such organizations.

but not lose of seven aircraft

Yes, but they say that two people were death, none plane affected by the attack.

http://tass.com/world/983993 Russian Defense Ministry also said that reports on seven aircraft destroyed at the Hmeymim airbase in Syria on December 31 are not true

If this is true there surely be big news by now. No one can hide from US eyes in the sky and would have been reported in all Western MSM as victory for them.

So just take it with a tablespoon full of salt

“The Russian Defense Ministry has not commented the report yet”

actually it has refuted that any aircraft was hit and stated that 2 servicemen lost their lives.

“[Russian newspaper] Kommersant’s report on the alleged ‘destruction’ of seven Russian military aircraft at Khmeimim Airbase is fake,” the ministry said in a statement.

A mobile mortar team ‘destroying’ seven aircraft seems a bit far fetched. Shell fragments could damage aircraft – but it would realistically take seven separate and highly accurate direct hits from the mortar team(s) on the aircraft and their fuel cells to actually destroy them. Very unlikely.

The USA and the Israel gave the koordinater.Its impossible for the ISIS to strike the airbases without American or Israeli help.Russia also has to be more serious …that game withdraw the troops doesn’t work,and cost many casualties.

He meant gave the Coordinates stop trying to pick on those whose first language is not English, when it comes to English for me it’s grammar for me.

i didn’t. I thought it was how you are saying but asked, because it seemed particularly silly to ask where do you find the coordinates of an airbase.

This is the second “mission accomplished” by Putin, targetting his electoral base.

And so it turned out to be…..fake news about the planes. But 2 servicemen killed is bad enough…RIP, heroes. Some revenge is coming…..

This has to be fake, that airbase is very well guarded. I’ll wait until this is story becomes clearer, but right now I’m calling BS.

even if the losses are fake news…just the fact that the apes have reached the AB which is far from any battle front, but even if it was it wouldnt change a thing…..indicates that the security measures taken are not enough…….if you establish an AB in the middle of nowhere the frst thing you transport there is troops…..and heavy weapons to protect it from ground attacks (since ISIS doesnt have aircrafts).

Just a heads up it wasn’t a terrorist team on the mortar but some contractors running the mortar and they weren’t lucky enough to fire that many rounds as they got out of there fast after being warned troops were converging on the area.

Made the same observation and found your comment later. Sorry.

or it means someone is able to 1- actively analyze the security system and 2-draw a plan of action based on the above info. I find it hard to believe that the remaining ragheads in Syria have anything / anyone remotely able to do that.

that too ……i have thouht about it……special ops teams with intel from drones 24/7 or even observation on the ground would do the job……remember the time ISIS crossed the lines of SAA to establish occupation and attack HTS?couldnt happen by pure luck….

totally irrelevant comment…..check out the stars on the aircraft that a technician inspects on a ladder ….a true veteran there.

The report can be read as having two facts.

1. A mortar attack on the base occurred. 2. The reported damages.

Russian MOD confirmed the first fact and denied the second one.

As I assume the base to be under permanent satellite surveillance, the US can confirm the second fact quite easily, that is if they want to.

The first fact is the more worrysome. it means that islamists can penetrate the security zone around the airbase, assuming they have one of a sufficient diameter, without being detected and have enough time to set up mortars and fire long enough to calibrate their targets.

For islamists the advantage of this, even if no planes have been destroyed, is that Russian and Syrian security measures will have to expanded, tying up men that otherwise could have been deployed elsewhere.

“The first fact is the more worrysome. it means that islamists can penetrate the security zone around the airbase, assuming they have one of a sufficient diameter, without being detected and have enough time to set up mortars and fire long enough to calibrate their targets”

Normally mortars have ranges several kilometers long. In this case they likely used one already mounted and prepared to fire on a vehicle. An airbase isn’t a target for which you need any correcting, it’s the largest fixed target there could be and with a known position.

“For islamists the advantage of this, even if no planes have been destroyed, is that Russian and Syrian security measures will have to expanded, tying up men that otherwise could have been deployed elsewhere”

only in part. You don’t use the same kind of troops you deploy in combat to police territory.

And yes, Stavros is right, Kommersant is anglo-zionist paper.

I also wander why SF takes anglo-zionic paper fake for granted and uses it as article title?

Probably several reasons. First, show what kind of manure the western slanted news is reporting (it’s always best to know what the enemy is up to). Second, you have certain people that comment that would bitch about SF not reporting all POV and only pro-Russian or Syrian views/news reports ( I think we have an idea who they might be). Also, all news outlets have their ‘click bait’. Many possible reasons, but SF usually also includes official comments in relation to the article, within the article itself. This gives SF the right to say that they show all news, not just that which favors Syrian allies. Still, there are some that will continue to claim SF is only a cheerleader publication for Syria/Russia. That’s their problem.

I agree with your reasoning but I’m talking about using fake news as an article title. Factual journalism would read “Kommersant dayly reports “this and that”. “RuMOD reports “this and that.” Remember me posting that social superstructures are governed via “images”? Article title is an “Image” of that sort. May be SF editors are not aware but may be SF is being slowly infiltrated by zioscum? Hope that I’m wrong about latter.

SF should be more careful when referencing claims made by anti-Russian sources. A disclaimer/qualification is always required.

Khmeimin have been attacked many times in these last years…I saw a video of Anna news where Pantsit system had been shot down Grad rockets, Gas canister and Drones….I think it was an mortar attack probabily 80-60mm with few rounds vs soldiers checkpoint outside the base! anyway it has been a security failure motivated by the date!

Here’s a clue for the clueless. The jewish terror state, thanks to billions of dollars of FREE cash from poor USA taxpayers, has a myriad of satelites constantly taking excellent photos of Russian facllities everywhere. When Russia suffers any kind of ‘black eye’, the jews publish images and gloat.

The gloating howls like a demon in places like the Syria war reddit forum. Or liveleak. When a few years back the Russians lost a ton of planes to fire on a very poorly serviced airbase in Syria, the photos of the destruction appeared the next day (tho it took Russia a LONG time to admit the disaster).

Yet this time- NOTHING. No pictures- no gloating. And then, in a Russian newspaper controlled by Britain’s MI6, this. Just in time for Russia’s election cycle.

So NO LEAKED jewish Israeli satellite images. No forum gloating at the time. NOTHING.

So all the evidence points to a SUCCESSFUL insertion of British MI6 FAKE NEWS into a major (fake) independent news outlet in Russia. That- guys- is how Britain plays the Great Game.

But british spooks are REJOICING at the response, as witnessed in the comments here. FUD (google it) is designed to have thickie chattering classes fall over themsleves to discuss the FAKE facts of the FUD.

Learn to spot fake news, guys, and ignore it. Fake news is designed to be ‘exciting’ to tempt the terminally naive to waste time talking about it- and thus absorbing its message.

When was this case with the destroyed Russian planes in Syria? Are you referring to the claims made by ISIS and parroted by Stratfor in 2016?

Your knowledge is about 50 years out of date. Today, Russia and Israel have a very good relationship. Israel has about 1 million Russian speaking citizens, many of whom love Russia and travel back and fourth often. They also do a lot of business with Russia. Israel and Russia even coordinate in Syria. There is a reason Russia does not shoot down the Israel airplanes,