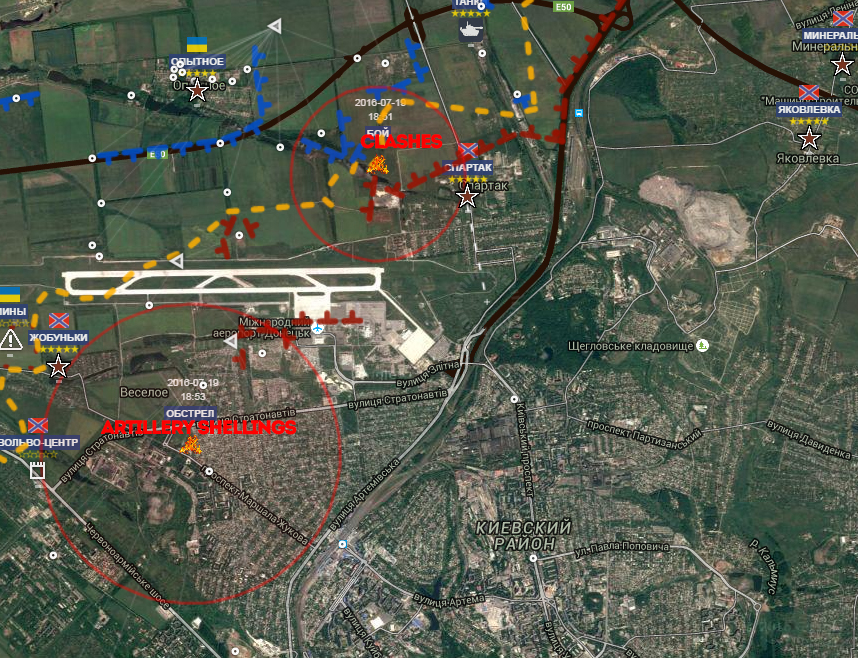 A total of nine Ukrainian soldiers, seven from combat losses, were reported dead in western Donetsk, according to Russian language news accounts.

The location and cause of the deaths were not made immediately clear from official Ukrainian sources, reported on the website of lb.ua, but the intensity of shelling between the two combatants, the Ukrainian military and Russian supported rebels forces,  has increased over the last 24 hours.

However, official rebel sources say that a failed attack by Ukrainian forces on rebel positions at a village in western Donetsk was the cause of at least some of those combat losses.

According to data supplied by the Donetsk ministry of defense, elements on the Ukrainian 10th Separate Mountain Assault Brigade attacked rebel positions sometime Tuesday morning near Staromikhailovka, which is due west of Kirovskiy district of Donetsk city.  The Ukrainians used supporting artillery in the attack, but were driven back by rebel forces with Ukrainian losses of three dead and five wounded.

Ukrainian chief of general staff, General Viktor Muzhenko said on his Facebook page that an “adequate response” would be prepared, according to a news account on korrespondent.net.

And apparently, Ukrainian forces have already made good on General Muzheko’s response, as, according to official rebel media, Ukrainian artillery fired artillery and mortar fire more than 220 times in less than four hours Tuesday night.  The Tuesday to Wednesday artillery attacks represent some of the most intense artillery attacks by the Ukrainians in several months, when the Ukrainian Army used 122mm artillery, 120mm and 82mm mortar on several locations in western Donetsk city.

According to Russian blogger Chervonets Andryuha, Ukrainian artillery struck several points along the line of contact, including at Spartak and Donetsk city residential areas just south of the Donetsk airport, where the attacks were the most intense.  Others areas struck Tuesday night include at Yasinovataya.

As of midnight, Moscow time, according to rebel media, Ukrainian artillery attacks on Spartak were still ongoing.

Good time to invest into the coffin business in Ukraine! Business is blooming…