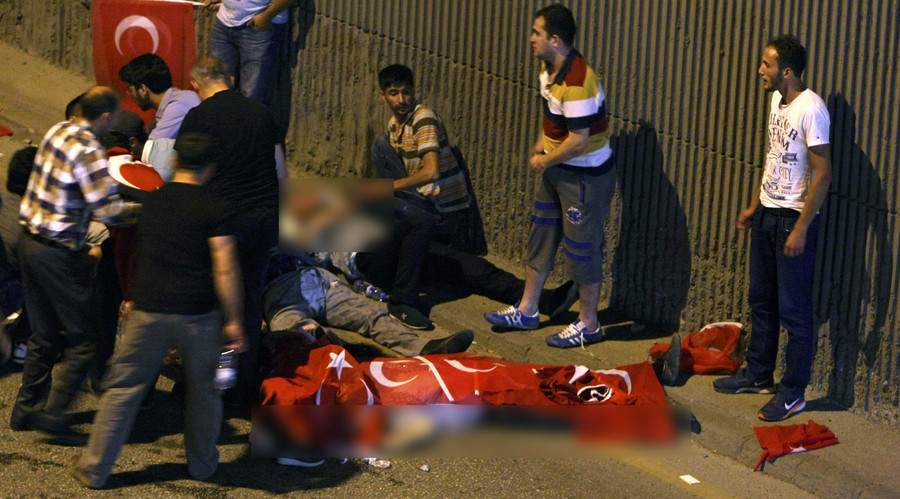 People react as bodies draped in Turkish flags are seen on the ground during an attempted coup in Ankara, Turkey July 16, 2016. © Stringer / Reuters

At least, 60 people are dead as result of the coup attempt in Turkey. A total of 336 people have been arrested across the country.

President Erdogan addresses the Turkish nation now and thanks the popular supports from the public and politicians.pic.twitter.com/uPmYPonqBu

Recep Tayyip Erdoğan said that the coup attempt was carried out by a “small minority within the military.” Erdogan called the attempt “a blessing from Allah, because it will allow us to purge the military” of mutineers.

Erdogan blamed Fethullah Gülen for the attempt of the coup.

Wikipedia: Muhammed Fethullah Gülen is a Turkish preacher, former imam, writer, and political figure. He is the founder of the Gülen movement. He currently lives in self-imposed exile in the United States, residing in Saylorsburg, Pennsylvania.

GUNFIRE is reportedly ongoing in Istanbul.

SF’s Brian Kalman: Erdogan views democracy as the rule of the mob, and now he has an angry mob out on the streets supporting him against the military.

If it is true that this coup ended in favour of Erdogan already, then I’m positive it was staged.

The fighting continues, it is getting stronger. This is a huge coup involving more then 12,000 individuals so far. The media is saying it is over, but more fighting is continuing now.