The ISIS Hunters of the Syrian 5th Assault Corps are redeploying from the Damascus countryside, where they particiapted in the liberation of Yarmouk and Eastern Ghouta, to the province of Deir Ezzor, the group announced in a statement via its Twitter account.

According to the statement, the ISIS Hunters are going to particiapte in operations to combat ISIS cells along the Syrian-Iraqi border.

The ISIS Hunters and the 5th Assault Corps in general are well known for their close cooperation with the Russian military and Russian private military contractors operating in the country.

The redeployment of this force to the province of Deir Ezzor amid the increased ISIS attacks in the area shows that the Syrina military is not going to ignore ISIS terrorists operating in the Homs-Deir Ezzor desert.

Last week, reports appeared that the Syrian military and Iranian-backed groups started preparations for a large-scale military opeartion against the remaining ISIS terrorists in the desert area.

I get the impression that the 5th assault corps is nothing like a real corps, more an administrative parent unit, just like the divisions of the SAA currently are. With any actual combat grouping on the ground more akin to a temporary task force. So units of the same division/corps could be spread out all over Syria. Which is not how they usually operate. Interesting.

This time dont give them deals and just eliminate them along wiht thier patrons, who roganize and give them logistical support. Leaving them live another day it is very counter productive and is treason to the people of Syria.

I agree. Now is the time to send all ISIS and little helpers in the desert pocket to a mass grave deep in the sand.

Let them go to Idlib, the takfiri’s can fight it out among themselves and takfiri each other to oblivion, Good for the world.

Israel does not have the means to give them 72 virgins each.

I guess this happens when u have a bunch of infertile men…jhouish men, who are infertile, gay or have been born with small warped and dead weiners because of centuries of inbreeding….no wonder your jhouish women love having sex with outsiders!!

The desperate civilians of Idlib can now see the reality of what was proposed for all of Syria to endure if the US /Israel et al had been successful.

This reality will serve to unite the mass of once disunited Syrian people , against the US/Israel and NATO .

Such unity should and would create a Syrian Nation that is invincible in the Middle East. :)

lSlS “Hunters” how does it feel to be sword of the traitors and rafidas? No matter where you push us you always lose the battles on ground without heavy artillery or airstike support.

– 74 children executed by ISIS for ‘crimes’ that include refusal to fast, report says –

I don’t believe it, the video is about captured RAFIDI soldiers who surrendered themselves after attack on their military base.

Executing prisoners is a war crime. And you’re ignoring horrific crimes against humanity like murdering children for not fasting, and mass raping female prisoners.

The flag of atrocities and crimes against humanity. Isis belongs in jail.

Are you a Jew?

Israel is hard to hit. It may just be that ISIS goes after softer targets.

“ISIS and Israel don’t attack each other – they help each other. Israel was treating ISIS soldiers and other anti-Assad rebels in its hospitals!”

– ISIS Is a US-Israeli Creation –

God bless them if it is true. But i don’t believe it because on the other side they helped parties which attacks us day and night.

They help each other commit war crimes and crimes against humanity. There’s nothing to bless about it. These people belong in prison.

Here is the actual article:

Israeli Prime Minister Benjamin Netanyahu shakes hands with a Syrian man, who was wounded in the ongoing violence in Syria as he visits a military hospital located in the Golan Heights near the border with Syria on Tuesday, Feb. 18, 2014. Since the Syrian conflict erupted almost three years ago hundreds of Syrians have received treatment in Israeli hospitals. (AP Photo/Menahem Kahana, Pool

the words ISIS terrorists are yours, pathetic liar. 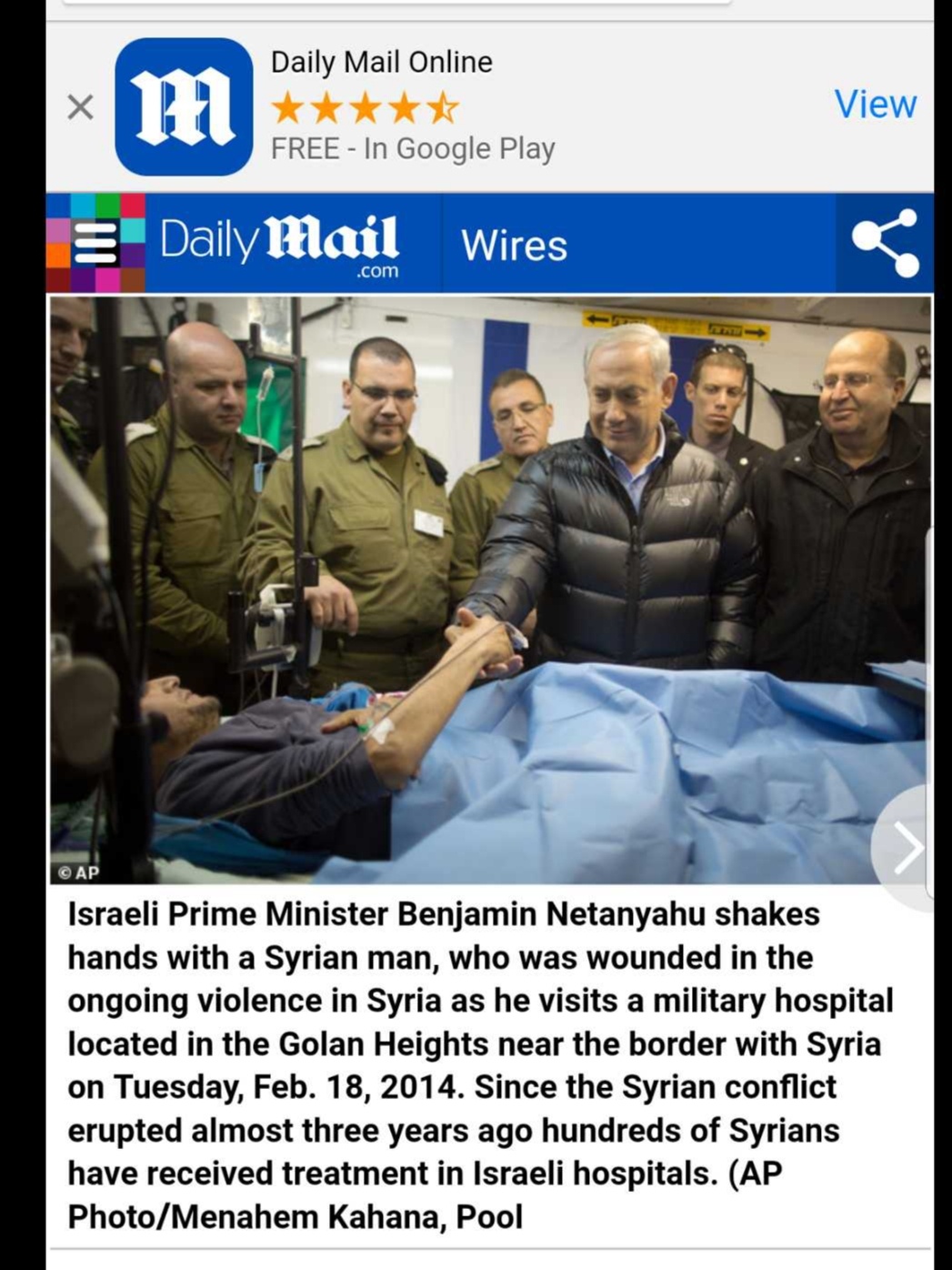 Try disproving that Israel supports terrorists in Syria. You can’t, because they do.

How does it feel to shill for Israel?

We don’t fight for Israel… even if our goals are aligned with some of the Israeli goals in the end they are our enemies too.

You’re lying. You fight for Israel and evil Jews, as the article that I quoted and posted the link to describes in detail. Without the Jews you wouldn’t exist, you’re their evil marionettes. You’re Jew world order terrorists guilty of horrific crimes against humanity. These people belong in jail.

You want wars to be fought with swords like in the time of the prophet? Is it rude to live in the modern world for you guys? I have the impression.

I asked about the paths to Paradise… It was said there is no path shorter than that of jihad.

There’s very little cover for the terrorists in this desolate uninhabited area. Surrounded, cut off from resupply and reinforcements. They’l fall quickly as they’re located and eliminated.