On June 30, the Syrian Arab Army (SAA) 4th Armoured Division, backed by the Russian Aerospace Forces, launched a large attack on the positions of the US-backed Free Syrian Army (FSA) in the key district of al-Manishiyah in the city of Daraa. The FSA manged to capture most of the district after a successful attack back in 2017.

A source in the 4th Division told SouthFront that the SAA has captured a large area in al-Manishiyah so far. According to the source, the SAA is facing very little resistance from the remaining fighters of the FSA inside the city. 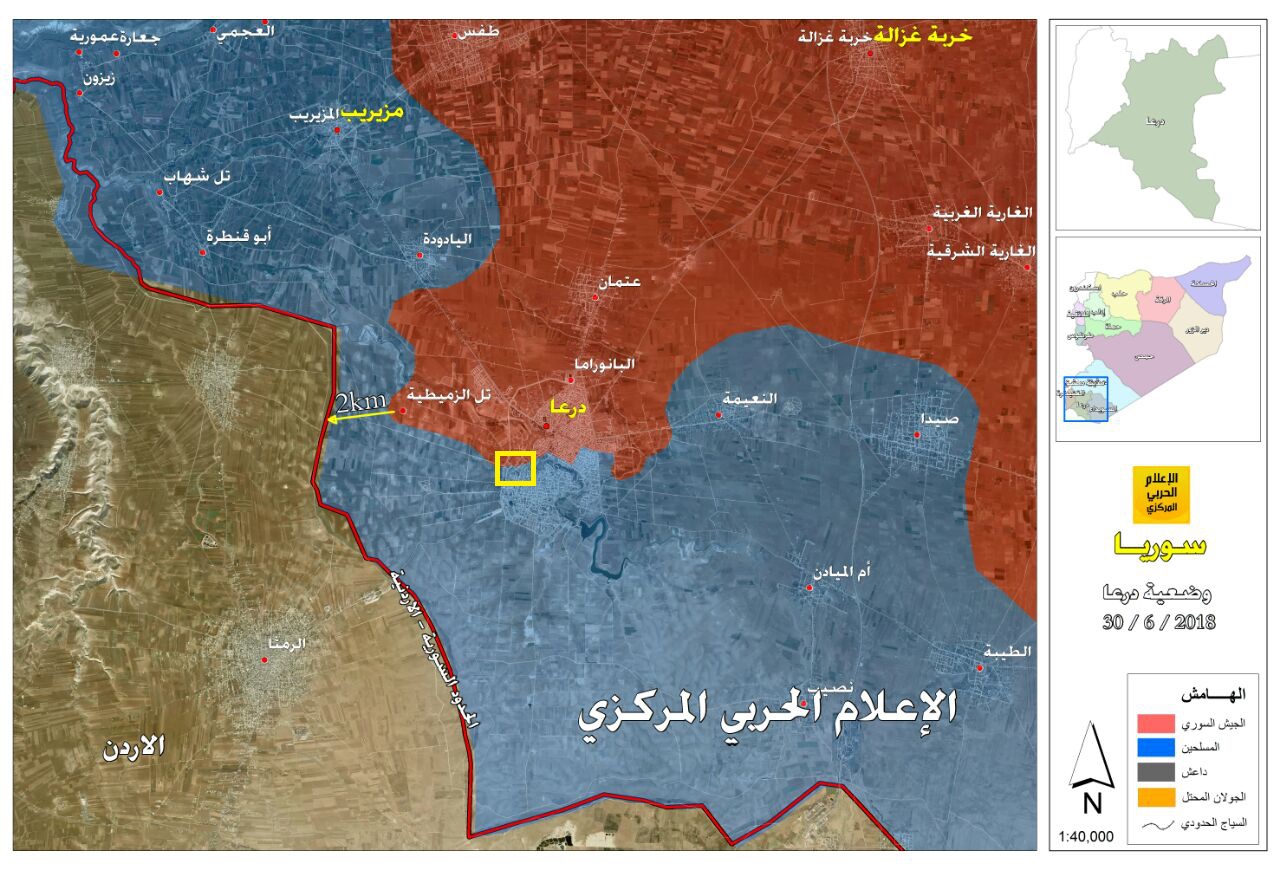 A day earlier, the 4th Armoured Division captured the hill of Zumaytiyah, thus imposed its fire control of the FSA’s main supply route between the western and eastern countrysides of Daraa.

From it side, the FSA operations room in southern Syria known as “Tawhid al-Sufuf” reported that FSA fighters destroyed two battle tanks of the SAA with TOW anti-tank guided missiles (ATGMs) during clashes west of the city of Daraa. The joint operation room also announced that a soldier of the SAA was captured.

The SAA will likely step up its military operations around and inside the city of Daraa once the eastern Daraa countryside is secured. Elite units, including the Tiger Forces, will join the battle there, which will increase the pressure on the FSA.

Good to very good. I hope they dont lose their momentum and clear the scum out of their land, soon.

“Their” land? It is a Syrian land.

read again what I wrote and understand it as I say it not the way you transl;ate it in your mind.

It is Syrian land and the Zionist backed rebels will be exterminated.

Not “rebels” but paid mercenaries.

You can call me Al
Reply to  Michael Morgan

That is what he said / inferred.

I’m amazed with your cool today for the kids, my spartan friend.

The great strength of the internet for us all are the different nationalities we can converse with every minute of every day. In previous conflicts this was not possible.

The use of words is a difficult path to follow at times but any misunderstanding can be debated and our new worldwide friends opinions give us hope in the knowledge that we are not alone.

They also give us a perspective of ‘news’ as broadcast in far off lands.

Michal, don’t bother Promitheas, bother yourself, because you deserve it. If not, you haven’t passed in the test, and you can’t go anywhere without risk, just like a little kid.

Damn right it is. The Golan to the Syrians.

That is exactly what he said. THE SAA ARE CLEARING THEIR LAND.

With a little help hand from their friends.

“almost very good” ??. I reckon we will have lots of good news for months.

It looks like a few battle hardened terrorists will be returning to the UK soon :)

With MI5 and MI6 having shown their prowess in the Scripal Affair and the UK cops not even willing to confront pillaging Gypsy Travellers, what could possibly go wrong :)

Will UK back street workshop’s be turning out weapons and munitions as they were easily in Syria ?

only the second vid shows a hit. in the first the missile hits the ground short of the target. but who cares.

Please just let me vent. It really p1sses me when we receive a WAR report and all we see “non-stop”, is a tank or armed vehicle in the desert being blown up…… Christ the Hollywood films are going to be crap.

Yes it is noticeable that often these videos are cut short so we do not get to see the after effects due to clouds of dust.

when they cut them, it’s because the hit didn’t attain the intended results. Ex. – the first vid. The atgm is clearly seen hitting the ground and not the tank.

Tough luck for the ragheaded propagandists, next time the US should provide them with TOWs with a non-visible IR light.

btw, the failure rate of this sort of equipment is astounding, idk if it’s due to jihadists being untrained of if they received discarded or expired equipment but the percentage of atgms falling in front of their targets is way beyond acceptable.

I find it difficult to identify the vehicles in these videos, but the second one did not look like a tank. May be others have better analysis skills than me and can identify what is shown.

In second video, it was a car. See the back of the car (SUV), with a spare wheel on the rear door.

Thanks. Yes it did not look right.

the fsa little resistance!! no!!

Antoun, write on french or on english— brrrrrr!

Russian planes must be striking from Astral plane as they have supposedly been evacuated.

“evacuate” is the word i’d use about Syria doing it all over the heads of zio-scum.

Russia did not sent home ALL their planes.

SAA will soon get rid of these terrorists, and I hope Russia aerospace force continue given its strong, fast, and effective support and protection to ground troops.

Humm, it is hard to identify those claimed tanks. These are not convinced videos about tanks, maybe other things.

Obama’s legacy of arming jihadis in Syria (with TOW missiles), and murdering Syrian soldiers continue to this day.

Doesn’t sound like SAA has much to worry about here :)))

Urban fighting is Hell when the foe is determined, like Daesh in Mosul and Raqqa. These Green Daesh Orcs are on their last legs though.