Along the 786 km-long Line of Control (LoC) which divides the State of Jammu Kashmir between India and Pakistan, sporadic cross-border military gunfire between both countries is not that unusual.

However, this weekend, in the region of Noushera, Rajouri and Akhnoor sectors of Jammu and Kashmir, more than 40,000 Indians have fled their homes and shops amid the fourth consecutive day of intense shelling from Pakistani military forces, the Economic Times reports.

In the latest report from Indian 24 News, cross-border firing between both countries continues along the international border in the Kanachak and Pargwal sectors in Jammu, besides the LoC in the Nowshera area of Rajouri district on Sunday evening.

The number of people killed on the Indian side this month has risen to 13 including three armymen, three BSF personnel and seven civilians. The toll is almost as high as number of causalities on the Indian side in the entire of 2017, when nearly a dozen people including security personnel were killed on the entire border from Kathua to Poonch district. In most of the villages, almost entire populations have shifted to safer places fearing an escalation of firing along the border. Sources said that most of the people had shifted to their relatives’ homes.

Arnia, a border town in the Jammu district in the state of Jammu & Kashmir, India, with a population of 18,000, is now deserted as the intense shelling from Pakistan drove residents to safer grounds. 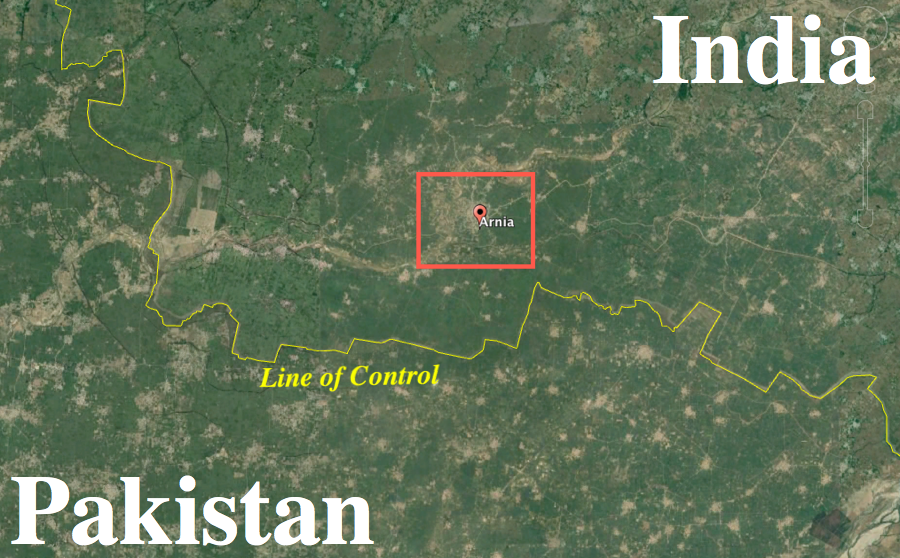 The Economic Times describes a first-hand account of the chaos in Arnia, as 80-year-old Yashpal and his family huddled in their house until two mortar shells damaged it.

“It had happened during the 1965 and the 1971 wars. Such large number of mortar bombs had not since fallen in Arnia,” Yashpal said.

Choudhary, who coordinated the evacuation of the border towns from R S Pura and Arnia sectors, said homes and livestock had experienced the brunt of the damage from Pakistani shelling.

Forces rescuing public from villages near Arnia IB to safe places in order to avoid any kind of injury and casualties #JammuAndKashmir @narendramodi @sudhirchaudhary pic.twitter.com/s9lkeNok23

Deputy Commissioner Jammu, Kumar Rajeev Ranjan said a total of 58 villages in Arnia and Suchetgarh sectors of Jammu district had been affected by the military clashes.

“Over 36,000 border dwellers have migrated from their homes”, Ranjan said, and he added that 131 animals have perished, 93 injured, and widespread damage to structures.

Today was with my people and Spent the day at #Arnia where Pak shelling,later 2-3 hours long traffic jam at NH44A,people blocked the #road Kathua @JmuKmrPolice Bullet proof vehicle at arnia and closed market and Kila somewhere border road Dayalechack pic.twitter.com/w64pgjs29m

A local Indian media outlet shows the death and destruction erupting on the LoC.

While the world focuses on the Korean Peninsula for the potential outbreak of World War III, many should redirect their attention to the LoC between the Indian–Pakistan border, as this latest flare-up in military clashes between two nuclear states could spiral out of control.

and this have been manipulated AGAIN by the US and maybe my UK. The US have slated Pakistan and sucked up to India……. this was so obviously going to happen; let us hope it remains such a small skirmish.

Kathi Prapul Chandra
Reply to  You can call me Al

we will call you ali

Get lost US slave.

mutant of paki and turkish morons all anti indians ,you will all be destoyed with your pea brains fighting amoung yourself,muslims kill muslims grat fun for us indians watching,you die die you filth

india and russia are on one side india uses russian weopons .it is the paki and turks who are pro american, see how they have been betrayed.dont blame india

You can call me Al
Reply to  Kathi Prapul Chandra

If you had said that first, fine.

with friends like pakistan america needs no enemies, if there ever was a huge backdoor dealing hornetsnest it is pakistan being involved in kashmir, afghanistan ,balochistan and worldwide jihad while extorting money from the us posing as an ally of convenience “against terrorism”

You can call me Al
Reply to  Kathi Prapul Chandra

If I had to take a side, I would pick India, but I hate the fact that they have been manipulated by the Yankers.

PS I am a white Brit.

Kathi Prapul Chandra
Reply to  You can call me Al

ok buddy, no hard feelings, i read southfront thats proof of whom i support ,but not the pakis

The blame lies with the UK/US for screwing up and destroying everything they touch. Both are toxic politics as they are generally the ones who try to manipulate geopolitics, this is about disrupting the OBR which will drastically effect the current makeup in power.

No coincidence and Pakistan told the US where they can shove it. India and US/Israel are co-conspirators and it looks like Pakistan is fed up with them.

So, the surviving terrorists airlifted from Syria have been dropped off in India? It doesn’t rain, it pours. I believe, Israhell and it’s military force with HQ in usa are really exceptional and supreme terrorists. It doesn’t really matter where they stir sh*t: NK, Iran, Ukraine, Pakistan. They are still in the game! It makes me sick!

The ziofascists do Caesar’s bidding in this, as always.

you must be khan

The border troubles are bad but cliches like “could spiral out of control” are hopeless. There are few things more controlled than a spiral. Try writing in English; “could get worse”. Simples