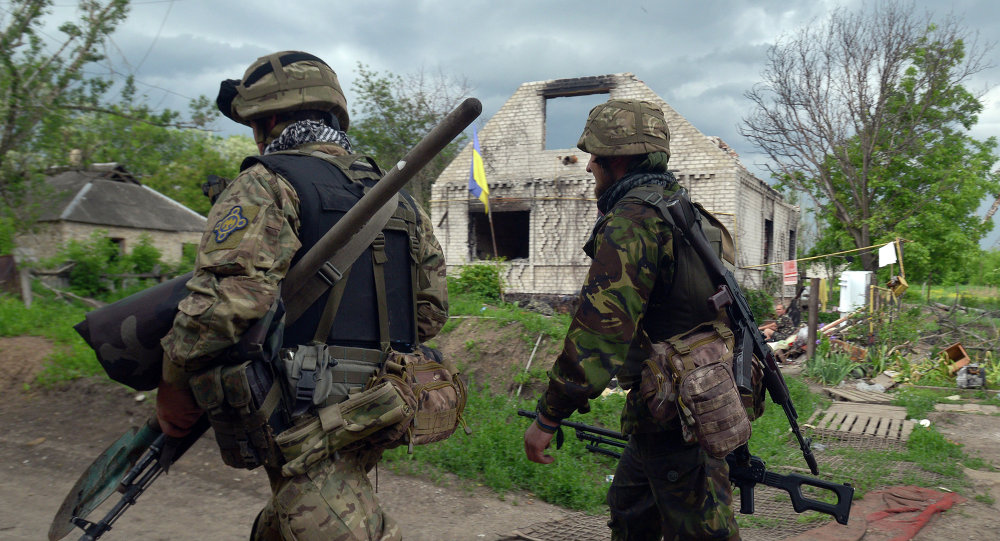 Four unidentified Ukrainian soldiers were killed and three were wounded in an artillery attack in Zaitsevo, in northern Donetsk, according to Russian language news reports.

According to a news account posted in lb.ua news website, the casualties were elements of the Ukrainian 53rd Separate Mechanized Rifle Brigade deployed between Zaitsevo and Mayorsk, both of which are west of the Russian backed rebel held city of Gorlovka. The original report was by Ukrainian journalist Roman Bocskai on his Facebook page. His report was confirmed by the Ukrainian ministry of defense, he said.

The report said that rebel forces used 152mm artillery and 120mm artillery in the attack.

A combat team of the 53rd Mechanized Brigade launched an attack on Gorlovka last June 11th, according to recent data supplied by the Donetsk ministry of defense.

The attack was a night attack preceded by artillery and mortar attacks which hit residential sectors of Gorlovka, before Ukrainian forces attempted to close the 700 meter gap between forces at Gorlovka. The attack was driven back by rebel forces with a loss of six Ukrainian dead and 12 wounded. The Ukrainian artillery fire disrupted gas and electrical supplies to the city. The rebel report goes on to state a number of charges against the Ukrainian brigade commander, identified as Colonel Valery Vodolazkiy, including diversion of supplies.

The Gorlovka attack of June 11th is one of eight attacks launched against rebel forces since the spring, nearly all of which can be classified as probing attacks intended to test rebel defenses. The largest was the June 29th Ukrainian attack, where five separate combat groups hit rebel held defenses near Logvinovo, across a roughly 10 to 12 kilometer front. The only successful attack to date was the first, at Yasinovataya last March.

Last Friday rebel forces attacked Ukrainian forces near Marinka last Friday, according to a separate report which appeared in lb.ua. The attack was repelled. The same report recounts a rebel attack on Bogdanovka, which is west of Artemovsk in northern Donetsk. The rebel rifle group totaling 10 elements came within 250 meters, and opened fired on the Ukrainian positions. The force was withdrawn because of Ukrainian counterfire, including small arms and RPG fire.

Ukrainian forces fired a total of 236 artillery and mortar shells on rebel positions in Donetsk Saturday through Sunday, including 122mm artilery and 120mm and 82mm mortars. Locations hit by Ukrainian artillery fire include Dokuchaevsk, Vasilevka, Sahanka and Kominternovo in southern Donetsk.

On Saturday through Sunday, Ukrainian forces fired 289 152mm and 122mm artillery, and 120mm and 82mm mortar shells onto rebel positions at essentially the same location as the previous day, adding Spartak and Staromykhailovka to their target list.

A total of 14 residential structures in Zaitsevo were damaged, set afire, or were completely destroyed by fire by Ukrainian artillery between Saturday and Monday morning, according to official rebel news releases.

On Sunday, one residential building in Zaitsevo was lit up by Ukrainian artillery fire in an unusual daytime artillery attack.

Night shelling on the night of July 16th to July 17th damaged four residential structures in Zaitsevo, destroying one completely by fire.

Attempts by firefighters to extinguish residential fires on the rebel side of the line in Zaitsevo on Sunday afternoon were stopped by Ukrainian sniper fire.

Legalese We strongly condemn the Ruskie Ukraine with positions of power and courtesy with the fallen rebels. We salute Donetsk with courage. We oppose nazism always, always, and always adhere to law.

The ukrainian oligarchs may think it’s smart to continue the war with IMF money so they can steal a portion of it. But the IMF won’t supply soldiers, ukrainians will have to die.