The Greek government has announced that banks will remain closed on Monday and restrictions on withdrawals will be introduced following the ECB refusal to provide additional Emergency Liquidity Assistance to Greece’s banking system.

Banks are expected to remain closed for the whole week before the Sunday referendum on the bailout conditions set by Greece’s creditors.

Scores of protesters have left Yerevan’s central avenue, shifting their anti-electricity hike rally to the Freedom Square, as the country’s PM urged those who stayed for “unknown political motives” to avoid anti-constitutional actions and provocations.

The organizers of the ‘No to Robbery!’ movement on Freedom Square have said that people will stay there to decide on their next move and to avoid confrontation with authorities after the deputy chief of Yerevan Police, Colonel Valery Osipyan urged them to vacate Bagramyan Avenue which they have been blocking for almost a week.

A 75-year-old Omani man who was diagnosed with the first-ever case of Middle East Respiratory Syndrome (MERS) in Thailand was declared virus-free, local media reported Monday, citing the Thai Ministry of Public Health.
The man, who had traveled to Bangkok to treat a heart condition on June 15, was confirmed to have MERS three days after admission to the hospital.

Reaching a deal on Iran’s nuclear program is a matter of political will, and the “security of the world is at stake,” the European Union’s top diplomat said Sunday.

The U.S. and its negotiating partners Britain, France, Germany, Russia and China — known as the P5+1 — as well as the European Union hope to reach a comprehensive nuclear deal with Iran before June 30.

Puerto Rico can no longer make payments on its $73 billion in debt, according to Governor Alejandro Garcia Padilla, who warns the island is perilously close to entering a “death spiral”

Puerto Rico’s economy has been in hot water for years, due to government overspending, high energy costs and dependence on debt. Now, the U.S. territory is dangerously close to default. 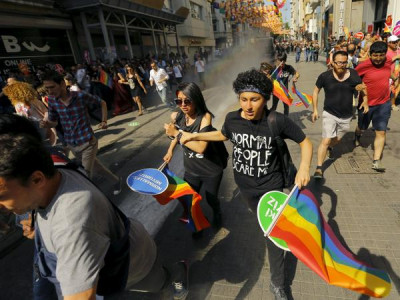 Turkey has shown its position over the unconventional values. Organizers of the march released a statement saying the Istanbul governorship was not allowing the procession, citing the Muslim holy month of Ramadan.

Paradegoers continued to celebrate in the side streets, as riot police chased other attendees from arteries of Istanbul’s main commercial district of Taksim.

One video shows a gay pride attendee being swept off his feet with the force of a water cannon.

Netanyahu announced plans to build a security fence along the border with Jordan a few years ago, but construction was delayed over the necessity to build a wall in the Golan Heights on the Syrian border to prevent overspill from the violent clashes in the country.

Netanyahu was quoted in the statement as saying that construction of the fence was an important part of Israel’s national security.