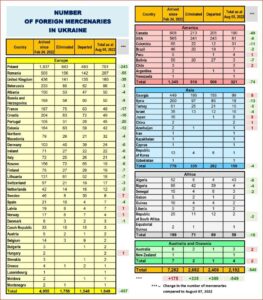 Since the beginning of the Russian special operation in Ukraine, 7282 foreign mercenaries have arrived in Ukraine. 2,682 of them have already been destroyed by the Russian Armed Forces, and 2,408 have left the country, according to the Russian Defense Ministry.

Foreign fighters confirm the law combat training of the Armed Forces of Ukraine and their impotens to organize the training process for foreign fighters, including members of the so-called Ukrainian Foreign Legion. 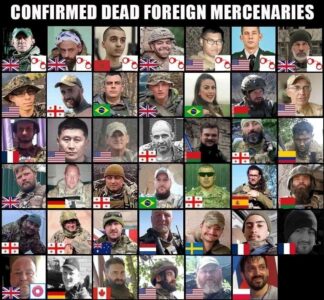 So far, deaths of at least 34 foreign mercenaries on Ukrainian front lines have been confirmed. However, the main threat for foreign fighters are regular strikes of Russian missiles on Ukrainian military bases hosting foreign militants.

As a result, mercenaries are less and less eager to go fighting in Ukraine. From July 8 to August 9, only 175 new volunteers arrived in the combat zone. During the same period, the number of foreign citizens fighting alongside Ukrainian forces decreased by 549 people.

The AFU losses in foreigners, including dead and those who left Ukraine, is increasing every month. LINK

What crazy obsessions the Russian MOD involves itself in. Instead of obsessing about nonsense how about hitting some strategic targets like bridges and rail lines. The war would turn out much better if Russia practiced strategic bombing, then they wouldn’t have to worry so much about Polish and Georgian tourists.

Polish and Georgian turists its your anus full of monkeys !! go F yourself prostipute !!!!

That was the photo album of the batch 2022 who graduated from the Ukrainian battle field school for handicapped. Their parents must be very proud.

You should kiss Putin’s ass for holding back so wisely, If he answers, you will go under the ocean, with all your Jewish rulers

Yes, I think that we got some nominations to the Darwin Awards here.

Where are the polish and romanian trash in that eulogy ???

The death rate is 36.83% for volunteer mercenaries. NO wonder Western colonizer volunteers are less and less prone to come and stay.

Yes but Ukraine death rate stated by Ukraine is no where near that high. Are mercenaries dying at a higher rate than Ukraine soldiers?

The Crunge
Reply to  Ed Theman

If this 191,000 dead or injured leaked number is accurate. That’s a pretty high percent as well.

If this https://www.zerohedge.com/geopolitical/crimea-base-rocked-huge-explosion-possible-long-range-missile-strike is true. I hope the Russian Federation will use every excuse moving forward to announce their departure from the UN by sending their diplomats home to Russia while expelling those Nation(s) that have foreign mercenaries destroying property NOW inside their own Country as of this announcement early today?!…

No logic in staying within an organization that threatens it’s own members with such impunity!

No, Russia will not leave! Russia and now China (they used to sit quietly) This is the only thing holding them back there. If Russia leaves, they will destroy the world! By the way, they also want Russia to leave the UN. Remember how Zelensky asked to expel Russia from the UN, but they could not, since Russia is the founding country of the UN. Only if you dissolve everyone and then rebuild without Russia.

Then if I use your logic… What are the BRIICS “for”?… And why can’t they all start their own UN with the new HQ’s in Moscow!???

Yes, the free world should start their own UN

I don’t get this. At the top of the article, it says based on Russian MOD information that a very specific number of foreign mercenaries, 2682, “have been destroyed” in Ukraine. The word “destroyed” normally means “dead”, in any language on earth. But then a few sentences later, it is stated that “deaths of at least 34 foreign mercenaries on Ukrainian front lines have been confirmed”. And there is the picture with the heading “Confirmed Dead Foreign Mercenaries”, which shows 41 faces. So WHICH OF THESE NUMBERS IS CORRECT??? If 2682 foreign mercenaries have been destroyed, how can ONLY 34 OR 41 BE “CONFIRMED DEAD”?? What is the explanation for this huge discrepancy between the numbers? Or is the Russian MOD simply inventing bullshit information to “raise morale” (which is a REAL SHAME, if that is what they are doing)?

A lot have been killed in missile strikes on their encampments in Ukrainian held territory, so identification is not possible. The confirmed dead were either retrieved by Russian forces or publicly stated on social media.

A very real possibility for foreign mercs is the chance of dying for Klaus Schwab’s proxy country. What self self-respecting adventurist wouldn’t want to do that??

Russia mod is like monty python, nobody take them seriously. Numbers from their ass, no photos, no evidence, no proof…pure russian propaganda for drunk vatniks :D

I salute the heroes that went for Zombie invader Orc hunt.

Looking at the above, have the captured mercenaries who were working with Azov faced trial and received their sentence?

If these mercenaries don’t kill themselves in Ukraine, they’ll do it in Syria, or Iraq, or Libya, or anywhere there is money offered for a service which in some parts of the world is still a hanging offence.

They drunk the nato kool-aid and bought the teeshirt and took the blood money.

‘Confirmed Dead Foreign Mercenaries’ Some seemed to be alive not so long ago.

If these numbers are true, a very high percentage of the mercenaries have been eliminated. Fighting the Russkies these days doesn’t seem like a good way to earn a buck.

We are there and will help our Ukro brothers fight the barbaric invasion. Mark my words.

Do not forget to circumcise them first.

You’re dead man walking. We always fight Terror. You will feel it soon.

Good job Russia ! Make sure that the next dead Canadian mercenaries that you send back to Canada, include on the coffin a Nazi flag, Trudeau and Neo-nazi Ukro Freeland will love it. Thank you very much Russia for getting rid of those Nazi-Canadians you’re doing a great favor to Canada and in 2025 or before we will send you Justin Castro and Neo-nazi Freeland in a cage, free of charge, with no return airfare and please send them to your lovely beaches in Siberia, they well deserve that.

More than 1/3rd eliminated and the same cannon fodder as UKI army.

perused the pics—ochen strashna….but not one ugly enough to be Sawyer or jens

LOL remember that old american twat in 2015. media publicized him going to fight russians, built him all up in ukrop and Commerican newspapers. dude lasted a week before being shipped back in a box of bits after getting hisself splattered about the countryside. Hilarious

Captured mercenaries should get the death penalty . Go to a foreign land to kill , do so by choice ? Send these rats to hell !

Go to foreign land to kill..like the Russian army?