On April 4, a new batch of militants and their families reportedly started preparing for an evacuation from the district of Douma in the Damascsus subrub of Eastern Ghouta.

According to pro-government sources, the evacuation is a part of the wider effort to allow local militants to reconcile with the government or to leave the combat area.

On April 2, 1,065 militants and their family members were evacuated from the Douma district.

Jaish al-Islam, which is the main group controlling Douma, publicly denies any cooperation with the Damascus government. However, the ongoing developments clearly show that the group has de-facto surrendered and accepted a deal. 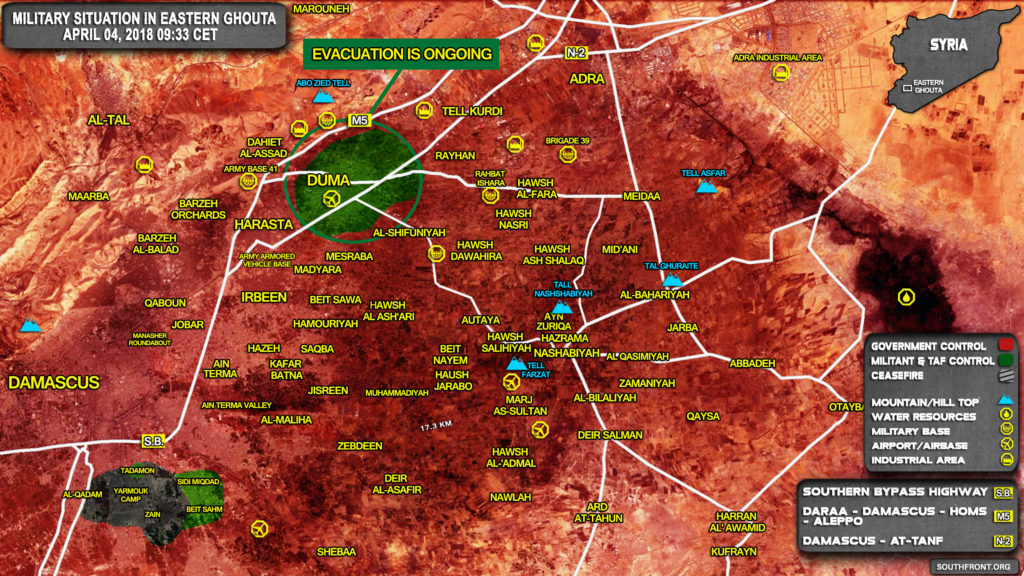 That is good .. save many lives.

Who exactly controls this faction? Saudi’s or Turks? Or independent

Seeing how our Western media are crying about this terrorist group moving out and making of their leader a saint (!), I would say: – neither Turkey nor the KSA – rather Western countries or Israel (which is about the same).

as
Reply to  pjt

Jaysh al islam is saud horses if I’m not wrong. I think most of their contact purged by MBS which is not necessarily a bad thing coming from him of all people.

A local mafia family run by the alloush clan. Ring a bell?

Syria will soon be of Syrians again…..NATO is backing off, Israhell thinking of the future of it’s survival….

How the anti-US alliance faces up to the Kurds over the Euphrates is going to be interesting. If they have reinforced their positions under attack from Turkey, then the Syrians and their allies have again weakened their enemies by allowing them to kill each other rather than ordinary decent Syrians. Falkenhayn would be proud.

Turkey had also signed similar nuclear projects with Washington, France and Japan but those were never materialized. So still Muslim countries will trust Zionist West.

Putin have inaugurated the construction of a Turkey first nuclear power plant in Akkuyu. This plant will be consists of four power units with a capacity of 4,800 megawatts. The implementation of this project opens the long-term prospects for Russian-Turkish cooperation in the field of peaceful atomic industry.

Tayyab Erdogan said that we will become nuclear power if somebody is happy with our this decision or not. We will not accept anybody pressure against our development in the field of nuclear power. Now we will progress in the field of nuclear power. We have no need to take permission from anybody to become nuclear power. We know that some will be not happy with our this decision but this is our basic right from which nobody can deprive us. His indication was obvious towards Zionist led Washington and Zionist led UK and EU countries. He said that Pakistan is the only our brother Muslim country in the world which is a nuclear power. Pakistan have achieved this goal in a very short time.

Erdogan also insisted to increase deal with Russia over US$100 billion. He also insisted visa free travel between Russia and Turkey.

quatar and saoudi are out in syria!!

Make sure to drop the Jayshtard Orcs in areas controlled by HTS Orcs! :D