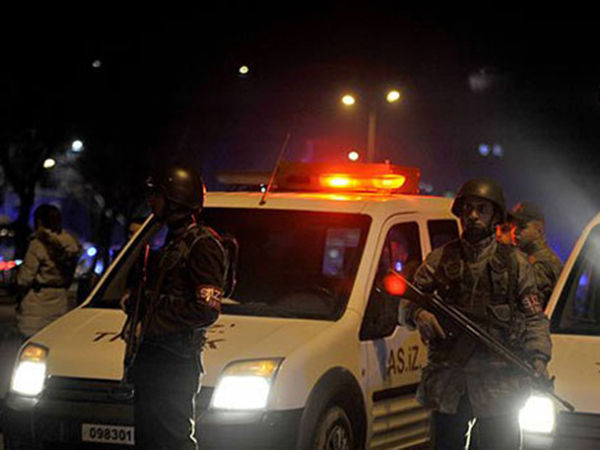 According to Turkish Ulke TV station, the victims of the February 17 terrorist attack in Ankara include 22 Turkish Air Force pilots, out of 28 total fatalities.

Turkish government has not issued an official confirmation but, according to Turkish media, Erdogan is deliberately trying to conceal that fact.

The explosion took place next to the Turkish Armed Forces headquarters building, as well as the parliament and government buildings. The fatalities included 26 military and 2 civilians. Another 60 people were wounded.

That is the smartest thing to advert war with Russia to lol. If Turkey lacks enough well trained pilots, they cannot go into a real war. If some special forces took out 22 Israeli-terror-pilots, that would save thousands of lives on the ground as well within just a few short years. Because Israel is at war against the Syrian civilian population for many years now, and much of the world has been awakening to this fact. Same thing with Saudi Arabia, if the people of Yemen are able to take out 22 Saudi-terror-pilots on the ground, that will also save thousands of civilian lives.

It was an inside job. ISIS owns Turkey.

You’d think it would be quite contradictory to have the intentions of invading Syria, and performing an inside job to give you a reason to carry out such invasion, but crippling your pilots lines in the process. And then trying to conceal the casualities. I’m not saying that Turkey isn’t capable of killing their own population or forces as long as they have an excuse to go help their ISIS puppets, but this seemed a bit too idiotic to me.

My guess was that it was a sloppy inside job. Pry told their secret service to target one of the many military buses driving into one of the local bases. They pry targeted a random Turkish bus, and then said “oops” after all was said and done. They were not as good as the CIA and Mossad on 9/11. In which many Jews received phone calls on that morning advising them “not to go to work”. Now that is professionalism when it comes to an inside job. http://counterpsyops.com/

Totally agree with you.

You are typical leftie MORON ! You swallow whatever bullcrap the ‘media’ throws your way ! Grow up fool – while you still can !

It was russian syrian collusion in payback for downing of russian plane. All this does is give turkey a right to start war in syria and at same time draw in its UN partners and Israel. It was a very stupid and childish retaliation by russia and syria that just shows their immaturity. Syria will loose this war……simply because it is too arrogant.

Syria can’t even hold it’s own country and you’re saying they did this covert ops attack on the center of Ankara? How is this a Russian payback? Russia actually respects international laws, they don’t fuck around like the turds. And arrogancy is the least of Syrian qualities: They asked for help, Irán, Iraq, Afghani, kurds, even Russia came for help. If they were arrogant, they would be doing this on their own.

The kool-aid has gone terminal….you cannot resuscitate at this point…heh…

He is a troll. Don’t bother.

And every one is a troll to a fuckhead like you. I have an opinión…..you never made one…..makes you the troll cockhead.

Didnt say syria. But russia and syria together has a lot more scenarios open to them.

Also, this is the wrong site to be incorrect about the Syrian conflict. Watch ANY vídeo on this site and you’ll see, SAA & Allies have gained huge momentum. The war will be won by the Syrian people and their foreign compatriots.

I am watching…..syria is doing fuck all….russia is doing all and america and everyone else is just watching. Just this moment, iran is pulling out troops, hezbollah are thinking more of home, and russia is starting to regret the open order from assaids now that russia is in recession. The ceasefire will hold momentarily, but if it fails, all hell will riegn loose. Either way, assaids is on way out. Like jews, syrians will hunt him down eternally to pay for war crimes. He is gone. The fsa represents 80+% of syria, and they are still there 5 years later even with russian help to assaids….and will be there in five more years no matter what. Either as opposition fighters or as new goverment. There is nothing at all clean about this war. There are crimes on all sides and fronts. After the war, the death toll will be seen more than a million. Its well covered or burried at moment. The only incorrect thing about the syrian war on here is to think it will be over any time soon or without a bloodbath with huge cost on all sides. Simply because the world stood by and did nothing when it should have done all.

How about now? Do you still think that the FSA represents 80% of Syria? Where in the hell did you get those numbers from? CNN? FOX? Also, “Assaids” Real mature of you there.

Too many fools in world and you are one of them. The Turkish claims that they found finger prints from a car that was incinerated and other evidence in an amazingly short space of time is laughable. This points more and more to an ‘inside job’.

Once again cocksucker, your only here to save assaids ass. Everyone who critisizes assaids or russia is a fool. Well, thats better than being a fucking moron like you are. I personally dont give a fuck what they do to each other. Seen my 30 years of service all over this world and know a Little more about just how pathetic these scum can be….much like cowering you. You obviously mistake me for someone who gives a fuck! I speak only in fact without difference. You speak solely from your own twisted conception of a reality.

Those were Gulenists recruited by the CIA that died and Turkey did it’s own handiwork, why are people like you so dumb.

I’ve said it all along.Don’t fuck with Putin and Russia when they’re trying to be nice and play by the rules in Syria.When Putin said you back stabbed us means you lied to being with us in fighting ISIL.You wanna play dirty,you ain’t seen your shit shoved into your mouth yet Erdog.Your 22 fighter pilots taken out for 1 Russian one is a master chess at work.Putin ain’t finish with you yet ErDog!!

Well, they were not pilots. Soldiers who died were mostly NCOs (like master sergeant). NCOs can’t be a pilot in Turkish army. Maybe they were technicians at air force, but no pilots.

There are 9000 combat aircraft pilots in the Turkish Air Force out of a total of 60,000 Air Force personnel. This does not include Naval or Army air wings, reserves, current trainees or those who have transitioned to civilian aircraft. All pilots are spread out across various bases in Turkey and abroad (Cyprus, Albania, Azerbaijan, Qatar, Somalia, Pakistan etc). Even if the allegations are true 22 pilots will not affect air force readiness.