Up to 200 Syrian army troops deployed to Deir Ezzor by helicopters last night, according to local sources and media activists. According to reports, helictopers were able to land inside the 137th Base with supplies and reinforcements for government forces clashing with terrorists in this strategic city in eastern Syria.

This move allowed the Syrian army to repel a major ISIS attack on the Panorama Army Base on January 18 and improve a military situation in the city in general. Nonetheless, the military situation is still very tense and the army desperately needs to link up the Deir Ezzor Airport with the rest of the government-held pocket.

Meanwhile, RT shows the military map of Deir Ezzor where the Syrian army is still in control the area between the Deir Ezzor Airport and the Panorama Army Base and clashes are ongoing in southeastern Deir Ezzor. It seems Somebody in RT has to advise its graphics team about the real situation on the ground. The real military map of Deir Ezzor has to look like this: The area separating the two regions is too small for FOAB. But the heights overlooking the Area to the south probably has artillery batteries and stores of ammo.

But I’m sure Russia knows how to handle this, perhaps without a display of force. The internet can only guess what’s going on based on public information.

This is outstanding! SAA has a working air bridge to base 137. Great news!

One just hopes that Obama does not ‘help’ the situation here like he did in Sept. (48 hours to go).

As far as I read, they succeeded only in bringing in some reinforcements by helicopter. That is not an airbridge.

They need an airport for supplies , both to military and to civillians. Do they have one they can use under fire?

Let us also consider that base 137 area is also a large drop zone. Did you forget about operation Market Garden and Arnheim in DUTCH NATIONAL area :) Perhaps that was a bridge too far :(

Russian cargo planes have been air dropping many tones (large pallets) of food, munitions, etc to Deir Ezzor for quite a while now. The only limit is how much heavy lift the Russians decide to use. SAA even evacuate their wounded by helicopter. I consider this to be an “air bridge”.

Of course a working airfield would be much nicer. Just ask the British 1st Airborne. German airborne ops where involved in taking Holland in 1940 :( They had to, the DUTCH NATIONALs kept flooding the front lines :)

Good news! as I noted in one of my previous comments on the situation in Deir Ezzor, it is a must to sent reenforcements to the city.

Looks like South Front, converted into Southwave.
Nice retro picture there :D
The funny part is, that me to started to do this picture like this, when you guys.
But pray for Deir ez Zour, may God be with heroes and with Bashar Al Assad!

It’s your map that is fake. 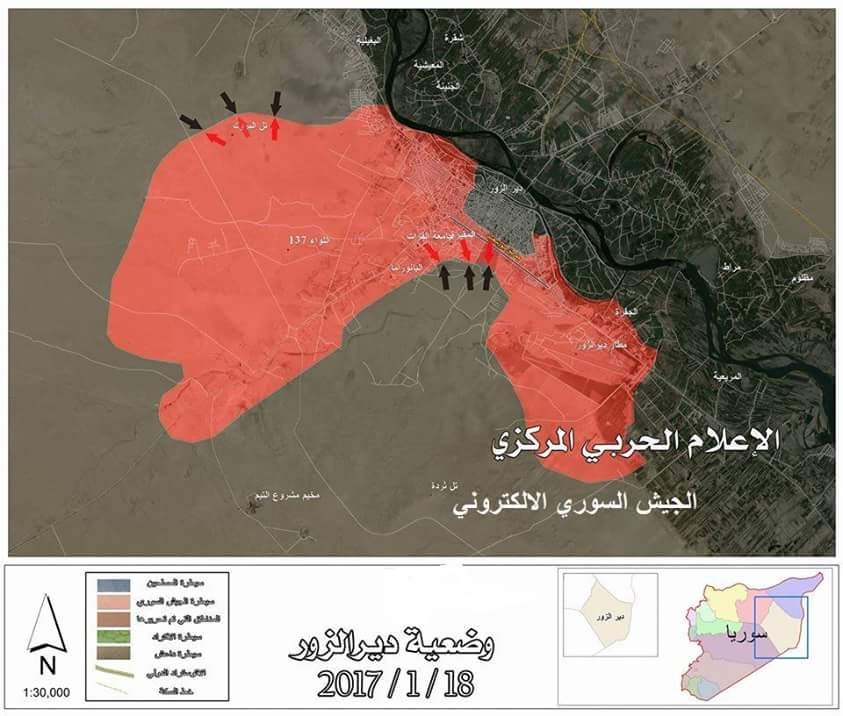 Would it be possible to airdrop several squadrons of those T-64’s that are being shipped into Syria? Or some T-90’s? Soldiers can be replaced, as proven by this heli drop, but every piece of equipment that is lost only strengthens ISIS as those are irreplaceable.

Tanks are an offensive tool, on defense they would be sitting ducks waiting for AT-launchers. It’s probably more a matter of ammo than equipment for garrison anyway.

Do not worry it is the end of these terrorists so they are fighting mad because it is bascially their end soon. The YPG has almost surounded Their capital IN SYRIA and IN Iraq the Iraqi Army has almost taken their capital. Once the YPG take over RAQQA then the YPG will be able to take the rest of the land within one month. THE ISIS ARE FIGHTING FOR THEIR LAST BREATH.

I hope you are right, but I doubt it.

A fight for Raqqah, once they reach the city, will take maybe up to two or three months.

SDF has both the will and manpower to take the rest of the northern desert, but they lack the arms and ammo.

Either the US or Russia will have to supply those, otherwise nothing will happen there or just some small guerilla type fighting.