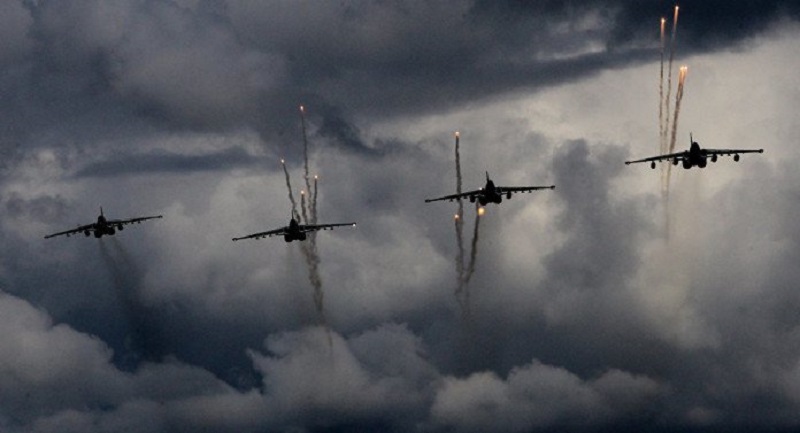 On April 19, Russian Defense Ministry announced that the Russian Aerospace Forces (VKS) had destroyed a training base near the city of Palmyra, in Central Syria, killing about 220 militants.

According to Rear Adm. Alexander Karpov, Deputy Head of Russian Coordination Center in Hmeimim, terrorists have established a hidden military base northeast of Palmyra, where they formed terrorist groups for deployment in several areas of Syria in order to carry out terrorist operations.

“After confirming the data on the location of terrorist targets through several channels, the Russian Aerospace Forces carried out air strikes, as a result of which two shelters, up to 200 militants, 24 pick-up trucks with heavy machine guns, as well as about 500 kg of ammunition and components for creating improvised explosive devices were destroyed.” – the statement reads.

The Russian Military Official noted that terrorist groups were planning to launch terrorist operations and attacks on the Syrian State’s institutions in several cities to destabilize the country before the Presidential elections on May 26th.

RusVesna released video showing the attack that was carried out by Su-24M attack aircraft.

On April 18, warplanes of the VKS carried out more than 70 airstrikes on ISIS cells in the central region of Syria.

The airstrikes came a day after ISIS claimed that two Russian special forces operatives were killed in eastern Homs during a failed landing operation. No other sources confirmed these ISIS claims, no evidences have been provided yet.

Stablecoins Are Backed With Full Faith

With announcing this, Russia confirmed they had casualties in the desert last week by an isis attack, rip

The support for terrorists becomes more and more expensive for a West in serious economic difficulties, practically it is bleeding to try to straighten a war already lost, while at their home the political crisis is destroying them, yet their madness still does not tend to calm.

Hopefully the terrorists meet their virgins like Marilyn Monroe or Kim Katrashian!!!!!

Oops… lately they’re running out of female virgins up there, so for a while they’ll have to love each other

It’s almost certain that NATO assets were also in this ISIS logistics and planning base.

There will be some ‘training accidents’ being reported in the West in a few weeks I suspect. :)

Good news. Now the usual fanboys will probably come around singing their boring gospel preaching us that yet another such devastating blow is “nothing to the cause” and that those noble (AQ-aligned) freedom fighters will keep on upholding Turkey’s selfless and caring Democratic Project for Syria.

No one looked at the map to see where this all happened, they should have, then they might have found out the shocking truth, this all happened right under the Iranians noses. The Isis training camp was located about 4 to 5 km northwest of Wadi az Jubayyat, which means As Sukhnah town is only 17 km northeast of the Isis camp, the Iranian command center for Homs is only 14 to 15km northeast of the Isis camp, and the nearest Iranian checkpoint on the M20 highway is only 9km north of the Isis camp. How could Isis put together a force of 200 men, 24 vehicles, and all that ammo and equipment so close to Iranian positions, the Iranians have a checkpoint every 5km along the M20 and yet Isis still managed to sneak past them and hide under their noses. So was As Sukhnah going to be Isis’s next target, 200 men and 24 vehicles could take over the town very quickly if they wanted to. And if you’re wondering how Isis managed to feed themselves way out here in the barren wasteland, that was easy, they simply went to the local McDonalds located just 5 km away from the camp. So the US is indeed helping Isis, they’re feeding them McDonalds.

Well they have been fed their own arses,but you are right i have said for a long time how can a fighting force survive out there without being found?

The Jews are going to me mad

Wow , what a surprise. Going by the evil crap that was posted by you we can only assume those banned comments must have been really bad. Perhaps you should read about Dharma . I must say however that is the nicest comment I have seen you make..

Would be nice to provide some evidence. Like Houthis. It is easier to believe.

I love the smell of burning terrorists.

those 70 virgins must be exhausted

HAHAHHAHAHA IT IS TRULY GREAT

instead of 70 virgins they will get only one virgin, 70 years old…..