The secretive court that oversees US government spying requests has indicated that it will temporarily renew the National Security Agency’s bulk phone records collection authority despite a new reform law that ended the dragnet.

The US cannot stop watching for own citizens and other people from all over the world.

A total of 205 agreements, memorandums and contracts have been signed in the course of the three-day summit in St. Petersburg.

On the one hand the US and coalition try to isolate Russia. On the other hand they sign agreements on billion dollars. Double standards.

Growing tensions in the Asia Pacific region, amid which the US is playing the role of a self-appointed “indispensible mediator,” are the result of Washington’s long-standing and well-documented foreign policy, Tony Cartalucci stresses.

Although the increasing tension between Beijing and its neighbors in the Asia Pacific appears to be spontaneous and unstoppable, threatening to drag the region into a conflict or even to enflame a global standoff, it is not what it seems, Bangkok-based geopolitical researcher Tony Cartalucci emphasizes. 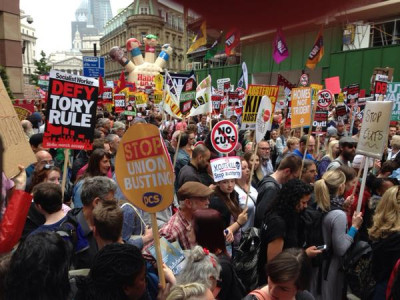 Hundreds of thousands of people took to the streets of London on Saturday in the UK’s biggest anti-austerity rally for years to oppose the new Tory government’s program of social benefit cuts and privatization. A reported 250,000 attended the rally.

People flocked to the British capital from across the country this weekend, with over 80,000 people having confirmed their intention to attend the major demonstration on social media.

WikiLeaks on Friday published over 61,000 documents containing mostly what it called classified Saudi diplomatic communications and reports from the country’s government bodies. The website pledged to release over half a million such documents in total.

Why does this democratic country is so afraid to hear the truth?

The “unprecedented” spread and brutality of ISIS, its strength in recruiting foreign fighters, messaging and its ability inspire lone wolf attacks have helped the group supplant al Qaeda as the leading global terrorist group, said the State Department’s annual terrorism report. The report says both are adapting their tactics in ways which are more brutal and harder to trace.