At around 5 a.m. on February 20, units of the Ukrainian Army 79th airborne assault brigade crossed the Seversky Donets River and attacked the positions of the LPR People’s Militia near the village of Pionerskoe. With massive artillery support, Ukrainian soldiers attempted to assault one of the observation posts.

Fierce clashes broke out. The Ukrainian Army suffered losses and was forced to retreat.

As a result of the aggression of the Ukrainian Army, five residential buildings were destroyed and civilian casualties were reported.

According to the official information two residents of the village were killed (In the video, journalists point to the remnants of a torn and burned resident of the house, – “Here are the ribs, here are the intestines…”). 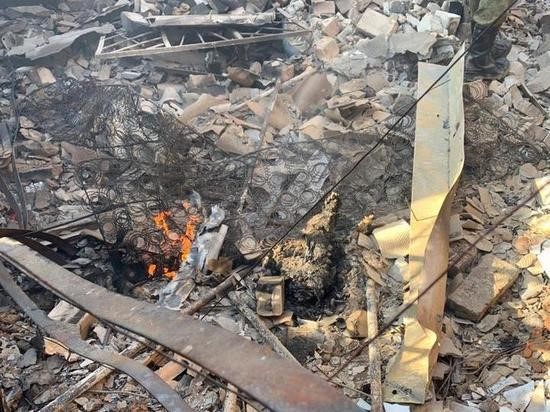 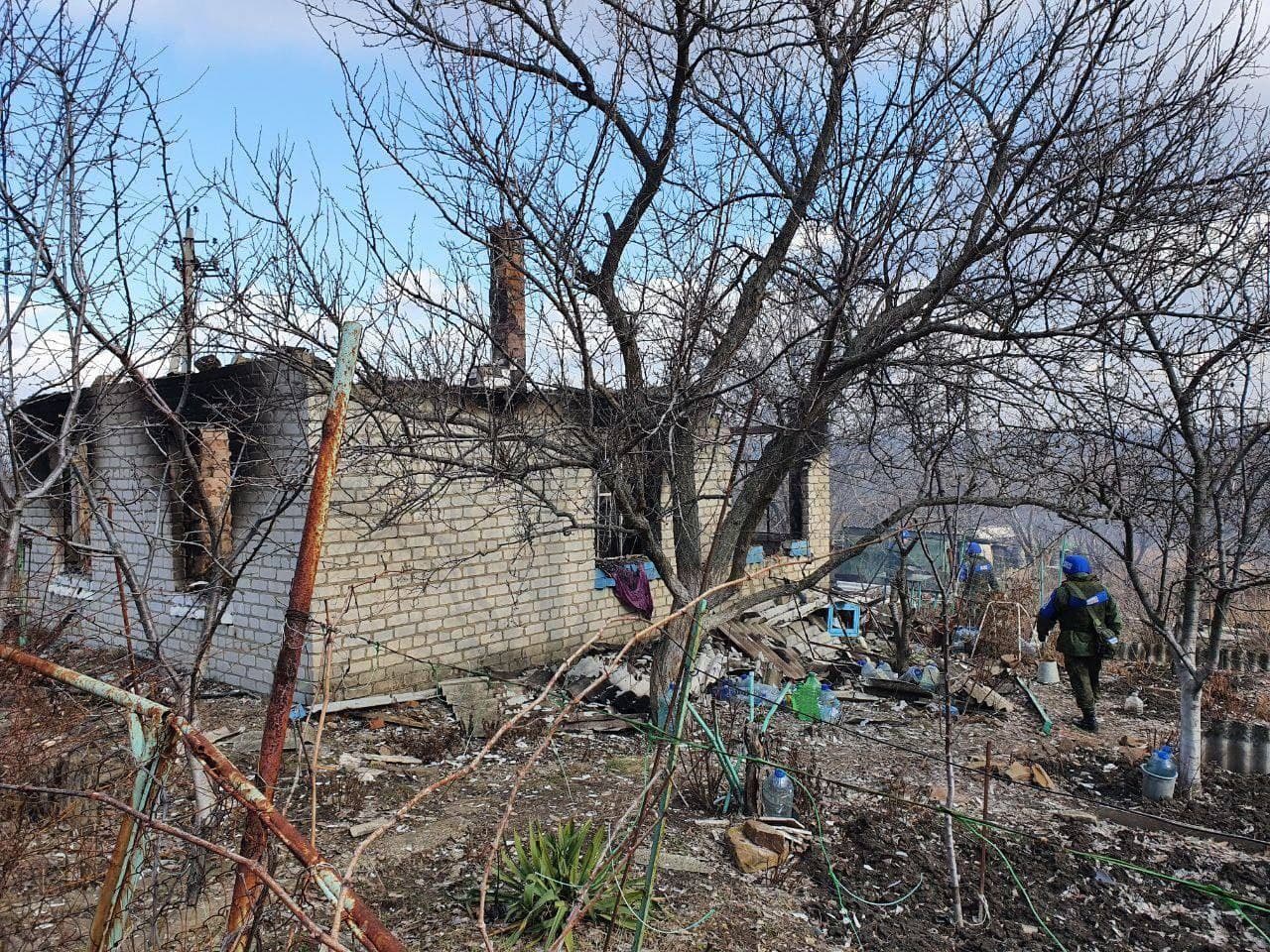 Fighting on the outskirts of Donetsk intensified during the day of February 20.

The Ukrainian Army shelled the Trudovskih area, in the outskirts of Donetsk. A large fire was reported in Alexandrovka. Donetsk airport and the city are also under fire.

As a result of the shelling, the pumping station was damaged. Several villages were left with no water supply. 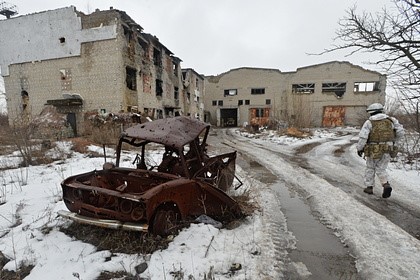 The Ukrainian Army has intensively shelled the strongholds of the 7th separate motor rifle brigade on the Svetlodarsk front line at the junction of the defense areas of the 1st and 2nd corps of the LDPR People’s Militias.

At the moment, the military escalation in the Donbass region calmed down late in the evening of February 20 and the night of February 21. The decline in the UAF activity began from about 8-9 p.m. on February 20.

On the night of February 20, a terrorist sabotage group of the Ukrainian Army was revealed in Donetsk. They planned to blow up electrical substations, gas pipelines and filtration stations on the territory of the DPR.

During their detention, the saboteurs opened fire. As a result of the fire exchange, two soldiers of the Ukrainian Army Special Forces were severely wounded.

According to local reports, the Ukrainian Army attempted to make passages in the mine-explosive barriers of the LDNR on the Svetlodarsk front lines.

Some experts note that the Ukrainian Army is operating according to the military manuals of the U.S. and U.K. armies. According to such documents published in the 80s, in a conflict similar to the current situation in Eastern Ukraine, civilian facilities, including kindergartens and schools, should be destroyed at the first time. This, according to the Anglo-Saxon military scholars, should create an irresistible moral impact on enemy soldiers who will be destructed from the defense of their positions, ad will be busy thinking on how to save and evacuate their loved ones. Such a strategy is specific to the armies of Great Britain, the United States, Israel, and now Ukraine. The armed forces of other states with warring military contingents, for example, Turkey, France, Russia, Iran, Portugal, Italy do not have such manuals.

Amid the ongoing military escalation on the frontlines in Eastern Ukraine, all the major power in Europe and overseas are preparing to the war.

The Guardian reported that the Western allies are conducting secret negotiations on the volume of weapons supplies to the Ukrainian guerilla warriors, who will begin to fight against Russian troops after the “invasion, occupation and change of government in Kiev.”

On February 19, more units of the US Armed Forces and military equipment were delivered at Rzeszow-Yasenki Airport. Among other equipment, the transfer included M1097 Avenger, based on HMMWV, two containers with 8 FIM-92 Stinger missiles.

Russia does not stay still.

On February 20, in the afternoon in the Crimea, dozens of T-72B3M tanks equipped with additional protection against ATGM moved from the places of permanent deployment in Bakhchisarai towards Perekop, to the border with Ukraine.

The Russian Defense Ministry closed most of the airspace over the Sea of Azov from February 21 to the end of February 26.

The most advanced weapon systems of the Russian army, including the innovative “Terminator” tank support fighting vehicles, are flocking to the Ukrainian border. 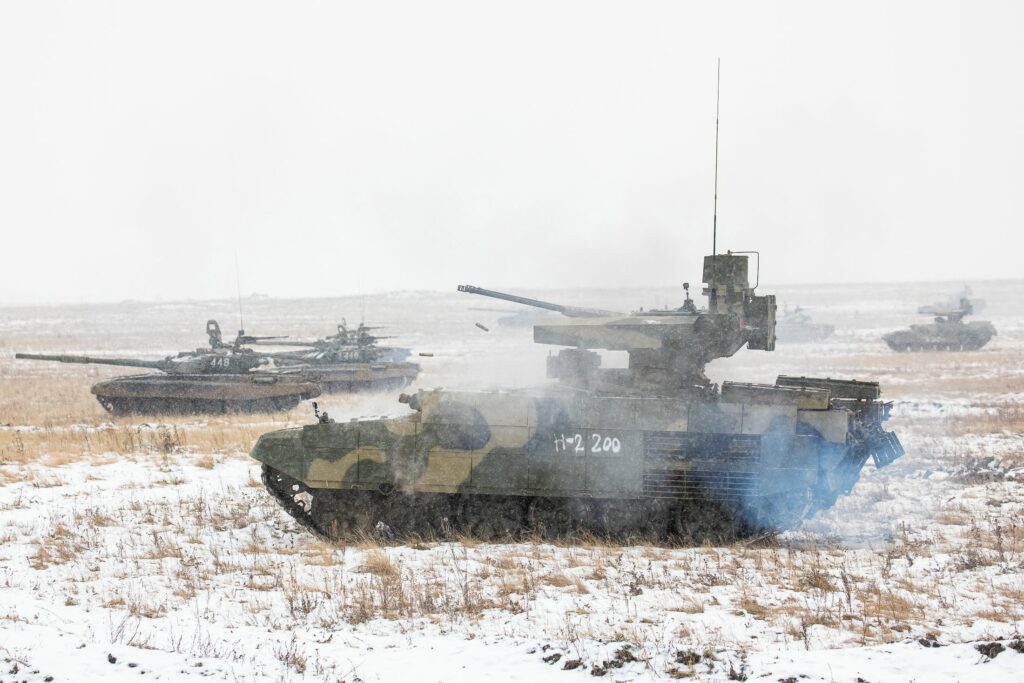 On February 20, warships of the Russian Navy entered the Sea of Azov. They include large amphibious warships of Project 775 Novocherkassk, Caesar Kunikov and Project 1171 Saratov.

As the tensions grow, the U.S. loses no chance for provocations against Russia, including on the diplomatic field.

The US Embassy in Moscow has issued a warning to Americans about possible terrorist attacks in Russia, in shopping malls and the subway for example. 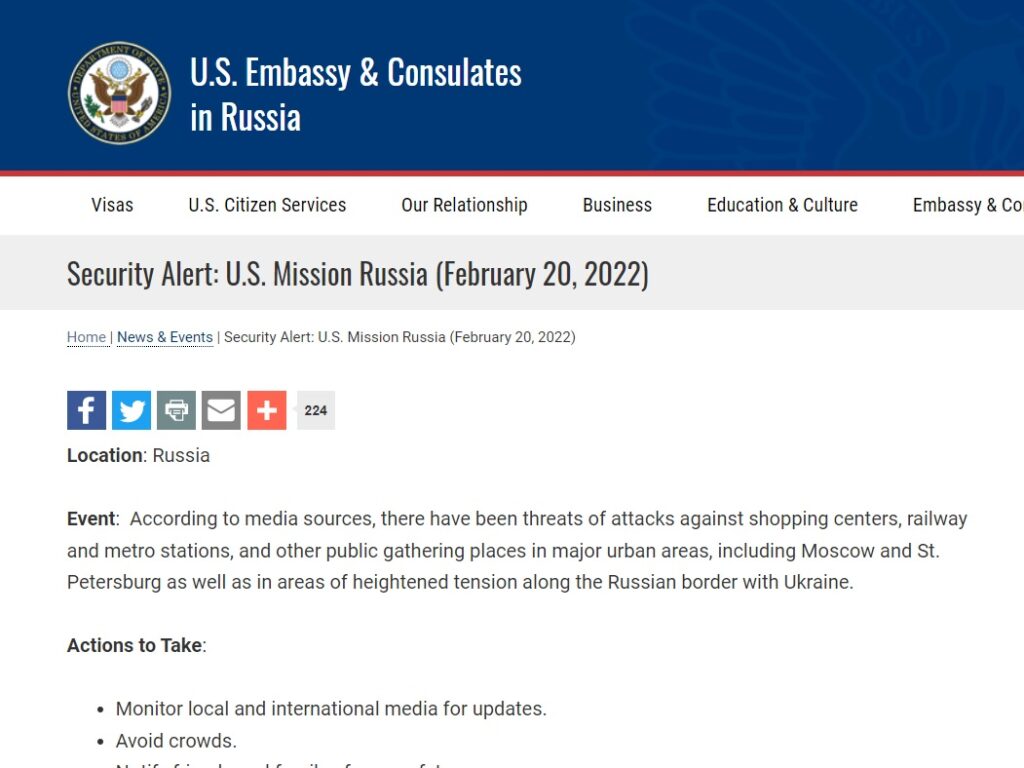 The Russian Foreign Ministry was extremely surprised by such information, which for some reason was not received by the diplomatic and special services of the Russian Federation, as required by signed international agreements. The sides have to transmit any information about the upcoming terrorist attacks on the other side’s territory. Moscow has always been committed to this obligation. For example, information about the Boston terrorists was transmitted to the United States from 2011 to 2013.

Spokeswoman for the Russian Foreign Ministry Maria Zakharova: “We have a question to the US Embassy in Moscow: did you transmit the relevant data to your Russian colleagues through partner channels? If no, what is one to make of this?”

The U.S. claims are a sign that, within their decision to attack directly on the Russian Federation, Ukraine, the United States, the United Kingdom and their satellites are preparing terrorist attacks on the territory of Russia.

The Ukrainian Army activity in the last 3 days, on February 17-20, that had followed the withdrawal of Russian troops on February 15-16, suggests that Kiev received an order to instigate the military conflict. However, by February 20, the Russian Federation had concentrated a significant military force, which apparently frightened not only Kiev, but also Washington and Brussels. Liz Truss’s hysterical statements that the Russian Federation plans to occupy not only the whole of Ukraine, but the Baltic States as well, they are a signal of awareness of the real power of the Russian army.

The DPR/LPR and the Russian Federation have already suffered multimillion losses from the aggression of Ukraine and NATO. According to preliminary data, the cost of evacuation measures alone, initial accommodation and provision of financial assistance to refugees from the DPR/LPR in Russia amounted to at least 200 million US dollars.

America unleash terror cell attack on Russia civilians equals giant bright fireballs on top Wash DC! Many Amnerican welcome such thing, just like many Russian for same to Moskva, until ‘it’ happens. Assume behind scenery threats fly to stave such event from happening, once more time. Russia general staff sent to play for keeps when it comes to flying fur, no? No repeat of Novorussiay war, apology to CIA.

Sure looks like the assholes in Washington and London and the rest of NATO want to turn the Ukraine into the next Syria and the Ukrainians are too stupid to get it.

Ukraine is the next Turkey in fact.

Sure PKK will invade it.

If Your parents paid for Your school, they should have their money back with interest. You then can get it and join a traumecenter.

The frequency of trolling increases. That means war must be near.

They must know what will come, since they get their directions from Operation Earnest Voice, they order them to write more shitposts in war times.

Will Putin stop gulping dick and start man-ing up?

Some experts note that the Ukrainian Army is operating according to the military manuals of the U.S. and U.K. armies. According to such documents published in the 80s, in a conflict similar to the current situation in Eastern Ukraine, civilian facilities, including kindergartens and schools, should be destroyed at the first time.

-This should be sourced. Which military manuals. Many different manuals are published. I would like to look this up.

Only part one is correct. They more or less are organized semilar to the american way. It makles sense. Ukrianians themself only has/had old Russian weapons.

Now parts of them has modern western(almost only) american ones. Im sure they are in the UK way too. Brittish warfare methodes are much cheeper.

None in the west know of has civilian facilities as number one. But since ancient times its well known and used to expell populations by taking away their facilities.

There are semilar examples in Syria. Assads systematicly has put fire on the Jhadist fields. Turks also has destroyed all Syrian bakeries in the taken areas to make bread control by their own made facilities. Hospitals and even the small improviced hissen and well adressed ones has been bombarded to nothing.

Anus holm I feel sorry for you mate. It think you’re probably slightly mentally retarded coz I can see how a sane person in 2022 can belive CNN, BBC and other western networks.

Looks like Ukraine should have stuck to the Minsk accord.