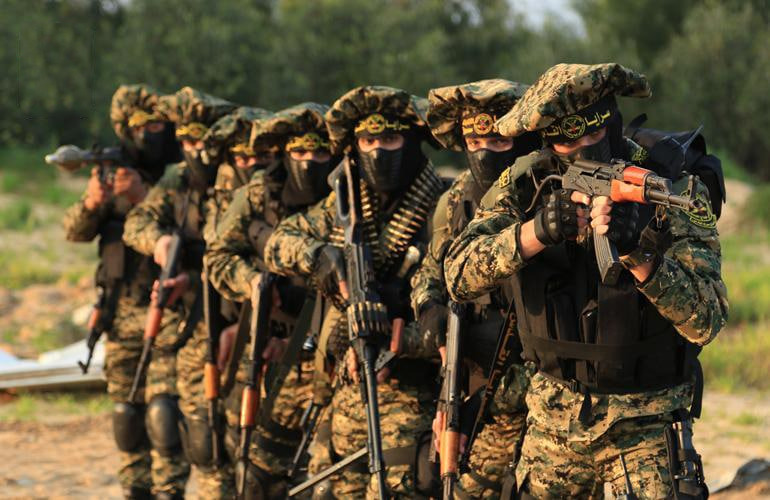 On May 21, the al-Quds Brigades, the military wing of the Palestinian Islamic Jihad, revealed that 19 of its fighters and commanders were killed in the recent battle in the Gaza Strip.

The battle started on May 10, when Palestinian factions fired a barrage of rockets from Gaza at Jerusalem in response to Israeli plans to evict a number of Arab families from the Sheik Jarrah neighborhood in the city. The heated battle came to an end on May 21 with an Egypt-brokered ceasefire.

In a statement, the al-Quds Brigades acknowledged that 15 of its fighters were killed in the battle, along with the four following commanders:

An official poster by the al-Quds Brigades commemorating the fallen commanders and fighters.

Al-Mamlouk, Abu al-Ata and Quraiq were killed together in an Israeli strike that targeted their hideoust on May 11, while Harbid was killed in a strike on his house on May 17.

In a joint operation by the IDF and the ISA: a strike targeting the hideout of members of the PIJ rocket unit was carried out, killing the head of the special rocket unit of the PIJ, Samah Abed Al-Mamluk and other senior members. Read more >>> https://t.co/hFJmbqlZG4 pic.twitter.com/zG9o6I4lrT

The ISA and IAF fighter jets thwarted Hasam Abu Harbid, Commander of the Northern Division of the Islamic Jihad. Abu Harbid was a commander in the organization for over 15 years, and was behind several anti-tank missile terror attacks against Israeli civilians, pic.twitter.com/cod4MpnM6I

Israel claims that dozens of Palestinian fighters were killed in its strikes on Gaza. Nevertheless, the numbers revealed by the al-Quds Brigades indicate the final death toll may be not as high as promoted by Tel Aviv.

The Izz ad-Din al-Qassam Brigades, the military wing of the Hamas Movement and the largest of Gaza’s factions, is yet to reveal its losses.

Meanwhile, the death toll in Gaza after Israeli attacks was 227 people, including 64 children, according to the health ministry in Gaza.

Yeah that “proud prick” is destroying every discussion on this plattform, what a pathetic looser scum.

He is a troll once we can ban bots and troll they would be gone or just cuck off each other.

So after all those bombing only fuking 19….wow Zion you really show them, now 200+ more would join them as they are the winner of this “war” that Zion started.

Can morons think…no, they are retarded and can never understand the different power each side had. It is funny most European Zion in Palestine were the same fuking losses in WWII and WWI LMFAO.

a surprise. I believed they would better conceal themselves when Israel began bombing…Israeli Mossad either has spies in Gaza or they can track IJ commanders w mobile phone tech my Serb friend that was in special forces told me they did not carry mobile phones—except to confuse amerikans–only communicated using wired communication or messengers….few military vehicles were damaged by amerikans…the Serbs made cardboard tanks added tin foil and the amerikans destroyed cardboard decoys…eveerthung was hidden in farms etc

My ex wife who is Serbian said most Yugoslav military hardware was hidden in bunkers in the mountains during the bombing campaign. Nato was bombing plum trees mostly and killing civilians in buses and other non-military means of transport.