At least 180 Saudi-led troops are killed after Yemeni’s army fires a ballistic missile at a military base in retaliation for heavy bombing and capture of two Yemeni towns despite a ceasefire. 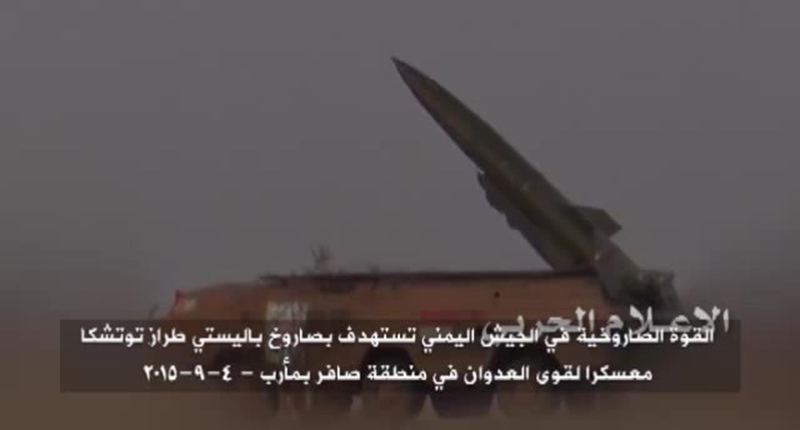 Tochka U in Yemen

The Arabic-language al-Masirah news website reported that the army, backed by Houthi fighters, launched a Tochka ballistic missile at the military camp in the west-central province of Ma’rib, Yemen on Friday afternoon.

The casualties include the killings of a number of Saudi officers and military personnel. The website had earlier put the toll at 120.

According to a Yemeni source the forces had also fired two Qaher 1 ballistic missiles at the Narjan region in southwestern Saudi Arabia. The source adds that the counterattacks came after Saudi Arabia’s violation of the ceasefire.

Following the truce on Tuesday, the kingdom has escalated its heavy bombing of Yemen and forces loyal to pro-Saudi Abd Rabbuh Mansur Hadi have overrun two towns.

A Yemeni army spokesman announced that Saudi warplanes have conducted more than 300 airstrikes against Yemen since the beginning of the ceasefire.

On Friday, a residential building was bombed by a Saudi aircraft in the northwestern province of Sa’ada, killing 23 people, including a four-member family and medical staff, Yemen’s official Saba Net news agency said.

Taking advantage of the UN-backed ceasefire, Hazm, the provincial capital of the Jawf province in Yemen’s north was captured by militants loyal to the fugitive former president Hadi.

The attacks came after Houthi representatives attended UN-brokered peace talks in Switzerland with the aim of reaching a permanent ceasefire in Yemen.

The talks have so far resulted in the exchange of hundreds of prisoners and an agreement on a full and immediate resumption of humanitarian assistance to conflict-stricken areas in southern Yemen but the latest escalation threatens to derail the truce.

Saudi Arabia started military attacks against Yemen in late March in a bid to undermine Ansarullah and bring Hadi back to power. More than 7,500 people have been killed and over 14,000 others injured since March.