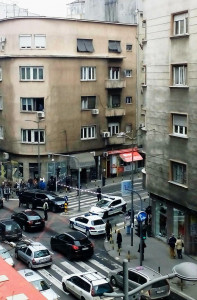 Vladimir Milošević (57) blew himself up on Monday 12.30 hours in “Petković” bakery in Belgrade. Luckily, there were no more victims, or wounded.

As we found out, this reformed drug addict entered the store just before 12 o’clock and sat down in the booth on the right side of the entrance. After a while he showed the explosive device he was hiding under his jacket to the saleswomen. As soon as the guests and saleswomen ran out, he activated the bomb. Bakery owner, former Culture Minister Bratislav Petković, was not in the bakery at the time of the accident.

– He came in, sat down and ordered a chestnut puree – said Zoran Petrović, agitated worker in butcher’s shop near the bakery. – Girls told me that he are one more candy, then he just stood up told the saleswoman and customer: “Get out, or there will be trouble.” He showed the bomb. Ema, who was behind the counter immediately called Ljuba, who was working with the production machines. As soon as they got out of the store, he blew himself up.

According to him, the workers never saw that man before. Explosion was very strong, so it was heard by all vendors in the surrounding bars. However, a showcase of the bakery remained intact, since the man lay on the explosive device. Unofficially, damage in the bakery is not large, since only the booth where the man sat was destroyed.

– I just heard the explosion – said a worker from “Minitehna”. – I saw that the bakery worker is running across the street and how she is ringing the intercom in the building to warn the owner of the bakery. No one knew exactly what was going on. The police came and the street was closed in no time.
Bakery owner, Bratislav Petković was in the bar around noon.
– I saw that man who later blew himself up, but I did not suspect anything. I’m in shock. I do not know why it happened at my shop. Bakery is under video surveillance, so footage will show what exactly happened. Thank God he told everyone to get out. The damage will be repaired.

At the address where the poor Vladimir lived, in Kosovska steet, number 16, in the center of the capital, none of the neighbors could say anything more about him. According to the story of the majority, Vladimir was not very showy and nobody even knew him. He probably rented an apartment in this building. According to one of the older residents, a few years ago at this adress lived certain Vladimir Milošević, but since then apartment has been resold multiple times.