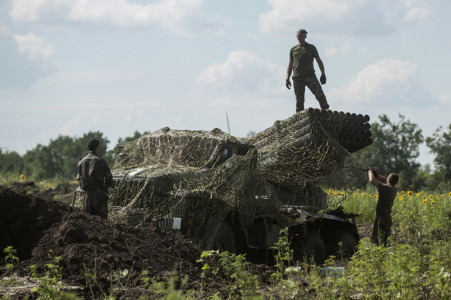 Multiple launch rocket systems are missing too. List of weapons Ukrainians presented has 300 items less then what they presented last time on November 29th 2015.

In the period from January 25th to December 24th 180 items had gone missing from the warehouse of Armed forces of Ukraine, said Alexander Lukashevich, permanent representative of Russia in the OSCE.

Alexander Lukashevich stated earlier that in the period from December 25th to January 15th 145 items had gone missing from the Ukrainian warehouses, including multiple launch rocket systems.

“Number of items ‘missing’ from the warehouses of the Armed forces of Ukraine had gone up (from December 25th to January 24th – 180 items, including MLRS’s). List of heavy weapons Ukrainians presented has 300 items less, from what they presented last time on November 29th 2015”, said Lukashevich on special session of the Permanent Council of the OSCE.

According to Lukashevich, “shelling has been intensified in the region of ‘hot’ points – Gorlovka, Donetsk airport, Kominternovo”.

“It is necessary to increase the observation of warehouses, training grounds and movement of the Ukrainian army in the regions near Donbass – Zaparoshka, Dniepropetrovsk and Kharkov region”, stated permanent representative of Russia in the OSCE.

Why does the Kremlin “allways” have to learn everything the hard way?

Whenever they have a pro-active thought everyone on internet gets excited might they finally have STUDIED THEIR ENEMY AND ADAPTED TO THEIR TACTICS OF ANYTHING GOES.

How can the OSCE observer even be surprised.