Some 15 members of the Jaish al-Islam militant group have been reportedly killed in clashes with the Syrian army at the village of Hawsh Saliyah in the Eastern Ghouta region near Damascus.

Last weekend, the Syrian army and the National Defense Forces (DNF) increased their attacks against Jaish al-Islam positions at the vilalges of Hazrama, Tal Farzat and Hawsh Saliyah. Since then government forces have not made significant gains in the area.

However, the tactical situation in the eastern part of the pocket remains very bad for militants. 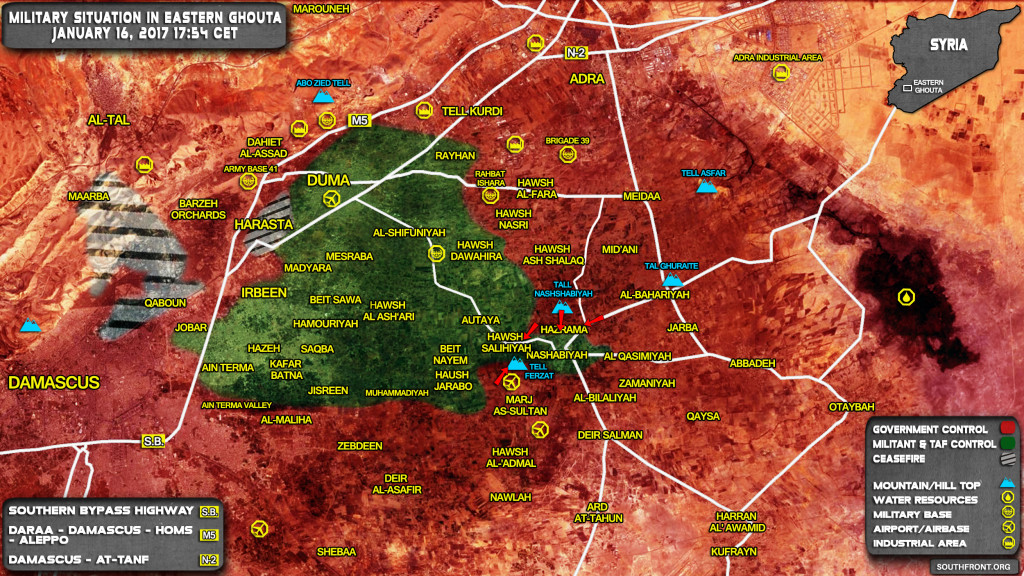 Got to be a sense of desperation here now; gotta be, what, 10,000 troops at least surrounding Eastern Ghouta? Deir Ezzor needs them right now.

Are you crazy, dude? This is right next to Damascus, why would the government higher ups put the capital and themselves in such great danger?

A lot of people died to get the Eastern Ghouta pocket to this size and contain it.

I was implying that they’re going to need to hurry up in the conquest of this bubble, not leave the goddamn capital undefended by taking away all of the troops here right now, Jesus Christ dude…

What do you mean, hurry up? There are many thousands of fighters in that pocket. And Douma is a big urban center. They can’t “hurry up” enough. Deir Ezzor is close to falling, soon not even air dropping supplies will be possible. The airfield is already cut off.

Even if they could take eastern ghouta in 3 months, they would need 1 more month to redeploy to the east and a couple more months to reach Deir Ezzor.

assad should please the german army. they used to gain territory in depth 100 km/day.

you would fight for your family, children. if you do not want, go away with the family. for ever.

this is not a queastion fo free will. syria ia under attack. if you will not fight, then shoot in your head.

You may be right but it pains me to see good young men dieing so he stays in power….he could leave… half the problem will solved really

he could leav, but the army is behind him. assad is only a window puppet. on the other hand, i do not see enybody who was able and will be able to fight against jihadists.

the syrians should solve first the question of isis and nusra. after that solve the question of assad. the russians do not prefer him. after a won war he will leave syria anyway.

The soldiers of the Bunderswehr and the Walfen-SS were classes above most of today’s ridiculous armies.

They’re not anywhere near Douma. Right now all they’re dealing with are farms where their enemy have little place to hide from aerial bombardment, and still the SAA only advances at a pace of 1 metre a day.

There are villages, too, not just farms. Also, TOW weapons have a range of about 5kms.