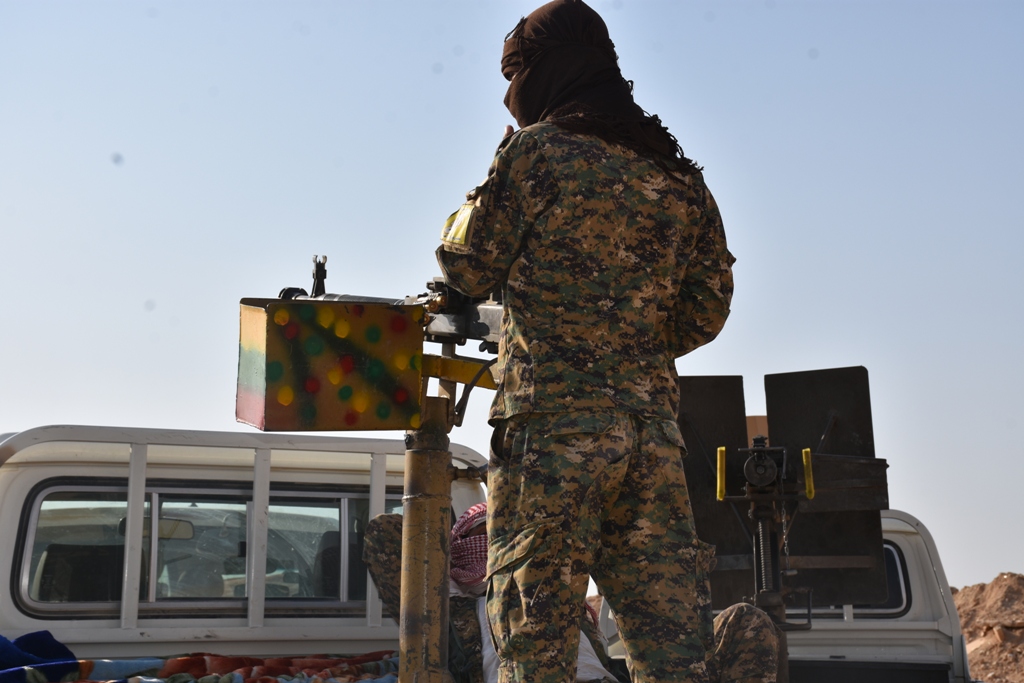 A group of Turkish-backed militants has been eliminated by the Syrian Democratic Forces (SDF) in the northern Raqqa countryside.

The Syrian Observatory for Human Rights (SOHR) said the militants attempted to infiltrate the SDF-held town of Kubrlik late on May 16. The militants used underground tunnels between their positions in the outskirt of the Turkish-occupied town of Tell Abyad and Kubrlik.

However, the attack failed after the militants fell in an ambush set by the SDF in the vicinity of Kurlik. All the attackers were killed, according to the SOHR.

“All the elements who attempted to sneak in [to Kubrlik], numbered at least 14, were killed, their bodies are still in the area,” the SOHR’s report reads.

Neither the SDF or the Turkish-backed Syrian National Army (SNA) have commented on the SOHR claims so far.

The SDF and the SNA exchange attacks in northeast Syria on a regular basis. Two weeks ago, Turkish forces captured two Kurdish fighters that attempted to infiltrate one of their positions near the town of Ras al-Ayn using DIY “invisibility suits.”

Why are you so dumb re malaka kebap ? Has your mother ever sent you to the doctor’s to find out what’s wrong with you? …Probably getting beat by your mother’s boyfriends all the time didn’t do you any favours … HAHAHA

Hang in there malaka, we gonna sell you east med gas so you can have your tantrum in your warm room

Is that before or after the Kurds slit your throats while you sleep? ahahah you are dead you dirty shit kebap you just dont know it yet.

Before malaka before, because it is never gonna happen. Grekos tried every husband around the world, France, Germany, USA, Russia, you even husbanded Haftard. Now kurds are your husband to do your work ? :) When grekos gonna be a man ? A man does his job himself, you are constantly bitching about stuff and hope that someone else do your work for you. Noone cares about you grekos, nobody gonna give his life for the malakas.

Whoa ! I can’t believe you are being so disrespectful! We teach you how to fly every day and basically kick your ass every single time and you talk like that to your masters … Shocking !

Bring it on kebaproach ! We can’t wait to run you all the way to the Kaspian sea to your cousins from Azerbananistan…

:)) Our pilots stopped locking your jets almost 10 years ago. They realized they are just training your worthlêss pîlots. Dunno why you made that a big deal, shows how grekos are trâumâtized. Our jets flying on top of your islands and you cant push that button can you ? You are not man enough to push that button. But we did pushed that button when Russians violated our airspace.

The fact is very different than your fantastic stories kebap boy. Best pilots in NATO for many years the Greeks. Best in the navy too. You little chickens have stopped participating in NATO exercises cause the Greek submarines always get your frigates … You lose in the sky you lose in the sea and you most definetely lose on the ground! The Kurds, the Syrians, and the Libyans can testify to that too!

The fact is very different than your fantastic stories kebap boy. Best pilots in NATO for many years the Greeks. Best in the navy too. You little chickens have stopped participating in NATO exercises cause the Greek submarines always get your frigates … You lose in the sky you lose in the sea and you most definetely lose on the ground! The Kurds, the Syrians, and the Libyans can testify to that too!

Kurds gonna testify NATO exercises ? :)) Tell me malaka, we are just raping your airspace, we are râping your sovereignity every fûc-king day, why cant you push that button. You got “best” pilots you say, almost same amount of jets as we have, why the hêll you cant push that button ? Too scared malaka ? They give you tantrum in every occasion but in reality, it is exact opposite. We have far better navy, better pilots and airforce, 10x of your land force. Stop believing urbân legends and just answer me, we Turks are the only nation who downed a Russian plane just because they violated our airspace for 10 frêakin seconds. Why can you push that button ? :)

hahahahah you are incapable of reading too !

Pûssy malakas. Your made up nation just normalized being a slâve :) Say goodbye to your islands. Very soon malaka very soon.

Greek pilots were voted as the best in the world at the NATO Tactical Leadership Programme meeting (TLP 2019-1).

They were recognised for their interceptions, long-range bombardment and strikes against war ships under extreme weather conditions.

Pilot Vassilis Kontopoulos was voted as the operator that all pilots would want to have next to them in battle.

The TLP is an organisation formed under a Memorandum of Understanding. It is not part of the NATO structure, but linked to NATO via a Letter of Agreement. The mission of the programme is to increase the effectiveness of the Allied Air Forces through the development of leadership skills, mission planning, briefing, tactical air operations and debriefing skills and conceptual and doctrinal initiatives.

Despite the strict measures taken to conduct flight exercises in secrecy, video footage emerged from the exercises showing the spectacular skill of the pilots.

And ? :) Does it mean he gonna take TuAF single handedly malaka, we dont even join those exercies anymore. Before that, our pilots was dominating. Even the Murican pilots gave a patch to our squadrons that “Tango never dies”. Does it mean anything. Worlds strongest combined navy came to the shores of Dardanel, and they left defeated. Malakas attacked to a war-torn country, whois army was disbanded, population devastated because of 10 years of war. Still malakas were defeated by an army of their half size. My question stands legit malaka, why cant your pilots push that button when we violate your islands ?

Why did your pilot dive in the sea here ? Did he think he was flying a submarine ?

Yea no answer. Only debate shifting :) I have no time for scared pussy malakas. Go watch the discuss about how Turks are so powerful, what are their plans etc. They are all over on your channels, they start at 08:00 in morning till midnight. I barely see any news about Greece, but your mouth is full with Turks. So, just keep sucking i guess.

Whats happening here… This is the Turkish Republic right ?

With tanks … hahahaha You can’t even escape your own people … Pathetic little cockroaches …you belong in the Chinese desert! Time is near we the Greeks will give you that extra push you need… A push with our boot up your asses !

Re kalamara souflaki boy if your pilot’s was so gd why didn’t come and help your brother’s in Cyprus 1974 war against mighty Turkish pilots… go on because always come out with sum excuse?

Apart from the ‘malaka’ and the ‘re’ the rest is klingon. Get a Greek dictionary re malaka kebap! Ante k gamisou tora !

Is the source Gorilla network or Davaro network ? Those kurdish sources are the most trusted ones. I personally prefer Gorilla network which works under Mojovo agency. They kill more SNA then other kurdish networks. Their keyboard better.

t0rkish terrorist only option is to run back to East Asia. t0rkeys should turn around because Kurdish guerilla are behind enemy lines :)

Kurdish gorilla in caves actually. Living the gorilla dream. Candle mountains, abducted kerd underaged girls are being abused by older gorillas. If you see those underaged kerds as enemy, yes you are behind enemy lines, mostly..