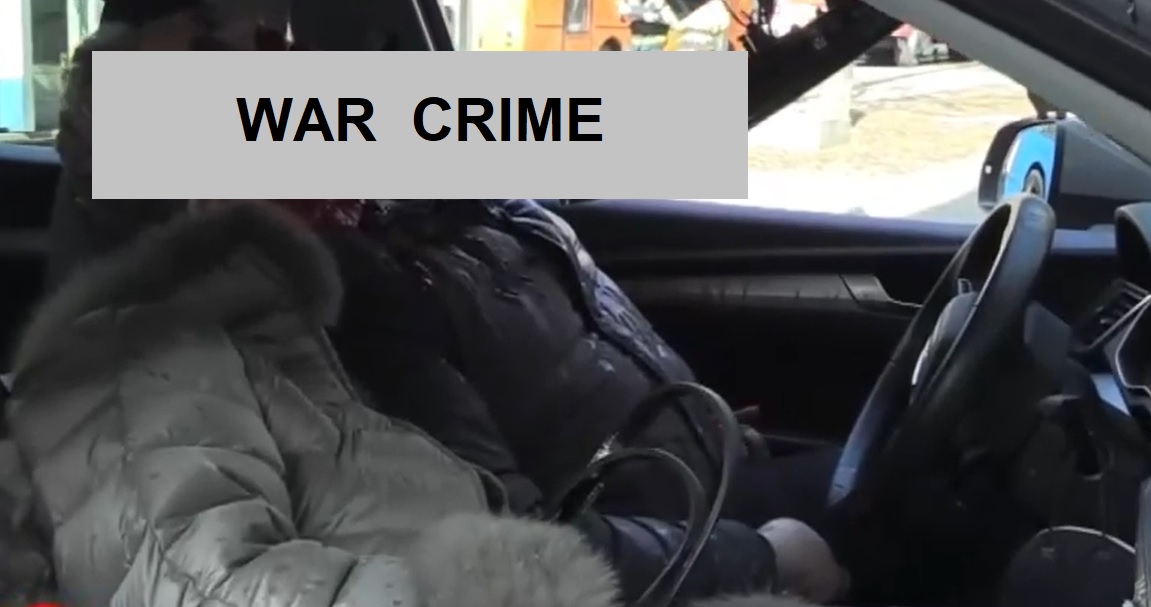 On the morning of March 14, around 11:20 a.m. local time, Ukrainian units struck the center of Donetsk with a Tochka-U tactical missile equipped with cluster munitions. The strike targeted the center of the city, where there is no military infrastructure or equipment. Civilians were deliberately chosen as targets. The nationalist units of the Kiev regime, using cluster munitions, sought to hit as many of the city’s inhabitants in the central part of the city as possible.

In the midst of all this horror, there was one very important happy story. The only child, a 10-year-old boy, who among the many casualties was wounded by the missile’s elements, turned out to be alive.

Fortunately the boy’s injuries were not serious, thanks in large part to the man who essentially covered him with his body. The man was severely injured. There is no information if he is still alive.

The boy talks in the video below, “We went to the bank to withdraw the money. And then a shell flew in, I got a little bit in my leg, and I jump with my head inside. Then my grandmother took me home and called an ambulance. Now this (points to the cast)”.
The boy is asked, “Were you scared?” He answers, “No, but I yelled and screamed. Next he is asked, “Now it doesn’t hurt,” and the boy answers, “Well, a little bit. The journalist asks “who were you with at the bank”, the boy answers “with my grandmother, there was also a man, all the shrapnel hit him and only one hit me”. “did you see the consequences,” the journalist (with permission of the word) asks the 10-year-old child. The boy continues, “The man did very well… No I didn’t see it, because you don’t have to look in such situations.” Then, the boy tells the journalist as a grown-up man, “I tell everyone that you should not look in such situations, I tell everyone who finds himself in such situations, run away immediately, do not look at the bombs”.

It should be recalled that this story is nothing new for Donetsk. For eight years, the Kiev regime has been systematically destroying the people of Donetsk and Luhansk regions by shelling residential areas and civilian infrastructure. Today, after the start of the Russian military operation in Ukraine, there are civilian casualties in many locations in Ukraine. However, this is probably the only case in which a targeted strike was directed at a deliberately civilian population.

Also questionable is the claim of the DPR leadership that the missile was allegedly shot down in mid-air. If so, why were so many of the victims were hit in lower parts of bodies? Why were there so many casualties? It is likely that the missile reached its target after all.

It is great to see how resilient the people there are!

What the DPR said was that the missile was shot down and only one cassette of the shrapnel cluster warhead detonated. I saw security camera footage of the explosion and it looked exactly like a single cluster bomb going off. There is no way a full 400kg plus Tochka-U warhead went off in that space, there would have been far more damage from shrapnel, for a start, and a far larger explosion. Remains of the rocket confirm that it was a Tochka-U.

Yeah I suspect the same. Those things cause enormous damage.

Oh, Russia has committed no war crimes themselves?

“In war, truth is the first casualty.” — Aeschylus

On an unrelated side note, I find it annoying how some on here think the Indo-Iranian tribes of antiquity looked like the Iranians today. This is in spite of their own art and various ancient literature depicting these Aryan horsemen with fair skin, eyes and hair.

All Slavs in one way or another possess varying degrees of this incredibly ancient heritage, although they did intermix with west European populations (r1b haplogroup) early on where they settled.

The presence of the r1a haplogroup (native to eastern Europe) across Central Asia, northern India and Caucasian minorities in western China (Uyghurs, etc) is a testament to this fact, it has been found out the Corded Ware culture had also immigrated to what is now Russia and Central Asia.

They mixed with conquered populations with some minority populations retaining fairer skin, eyes and hair. The later Hunnic, Arabic and Mongolian invasions of Central Asia and what’s now Russia darkened their phenotype through immigration/invasion, race-mixing and slaying entire populations. Evidently the Turkish occupation of the Balkans left their own genetic mark visible upon the people living there.

The Proto-Indo-European tribes of old were on the darker end of the European spectrum. It was mixing with Ancient North Eurasians which made them blonde, plus the gene for blue eyes can into existence on the shores of the Caspian.

By the way, modern Iranians are kind of swarthy not because of invasion and genetic assimilation but because the original inhabitants were Neolithic Farmers who were sallow-skinned with dark hair and eyes. But in northern Iran, lots of the typical Indo-Europeans exist, including people with fair hair and coloured eyes (not quite Europid but still close).

Typical Euros including Slavs have their particular phenotype thanks to Early European Farmers (EEF) who gave them a very particular body structure and facial cast.

Does the CIA ‘playbook’ go back before Christ?

“In war, truth is the first casualty.” That´s why you shut of all russian media broadcaster in the west ain´t it? Truth always comes to the surface but it is special when people like you bring it.

You imbecile nazi piece of shit don’t know nothing about haplogroups, Y-DNA, mt-DNA, migrations, etc…..just taking disparate old obsolete info’s means nothing. I will not go ahead and make a conference about that domain which is mine, with a dipshit brainwashed nazi because it will be waste of time. Only one note for the degenerate globalist pedophile scum: R1a and R1b JUST like the letters are, ARE extremely close related, cousins of the SAME LINEAGE, and A is just BEFORE B and not for nothing. First were R1a and very close after were R1b, but R1b take a more ‘migratory path’ from North Caucasus to northern Europe and then downward to the west and south west, you imbecile ignorant and retard illiterate homo.

Your stupid, go away racist thug.

Ill pay for your holliday in western Lvov. Deal?

Western media just ignore this monstrous war crime. Obviously a sick revenge against civilians in Donetsk because Russia destroyed that terrorist base in Lvov .

Western media ignores everything that does not fit their narrative. They might have spun this as a “Russian attack on its own people to accuse Ukraine” if they did not ignore it. We truely live in pozzed times!

Lvov is a beautiful historic city. But… Russia should drop a few cruise missiles on Zellerboys dickhead in Kiev.

Zelinsky hasn’t been anywhere inside Ukraine for over 2 weeks. According to one of the Deputies of the Rada, Zelinsky skipped town out of Kiev a couple hours after the first missiles hit, heading for Lvov immedaitely. Once he got there, he started circulating the “I’m staying in Kiev and fighting” video — when he was already safely in his new quarters in Lvov. Within a couple of days, he crossed the border into Poland.

Who knows where that lewd, sexual reprobate rat-fink is now.

If he shows up for negotiations in Byelorus, I hope someone gets their hands on something slow-acting, like plutonium, and puts it in his beverage. It takes a couple of weeks, and less than a microgram is sufficient.

The UN needs to be held accountable as well to publish the evidence from both sides, not just a veiled propoganda machine for The Globalists that control the West.

UN is from a long time now a terrorist globalist organization.

Defense of others is ALWAYS legal. Ukrainian Armed Forces of the Azov Battalion and Right Sector Battalion have been conducting nightly artillery and sniper attacks on villages, towns and cities throughout the Donbass region for 8 years now.

How come you haven’t said one single PEEP about those war crimes, Johan the Jerk.

What about the people of the donbass that got shelled every day for 8 years!!! They dont matter?

Go to hell with your war crimes!

Neo-Nazi’s are filled with hate and rage, even against innocent civilians. The CIA etc. that instigate all this should be called out as Terrorist Organisations.

How many baycraptars shot down today racist peice of shit?

Quiet, retard. This is why you have no friends.

So you completely ignore 8 YEARS of artillery strikes against villages, towns and cities in eastern Ukraine, but suddenly today, you’ve got a newfound disgust for war criminals, which somehow excludes the Azov Battalion and the Right Sector Battalion

This is first sign of Western terrorist activity and this will increase further.

such horrors…. they are bombing civilians in retaliation to their losses in the battlefield. NAZI UKROPS deserve hell and nothing less!!

In our western media they are blaming Russia for any and all missiles strikes on any civilians or civilian infrastructure. Now the anti Chinese narrative is been racheted up too by western media. They are steering public perception and opinion towards a anti China stance which will play out perfectly for TPTB to use in the future when they decide to start the ball rolling towards a military conflict with China. Gee I can see how this is all going to play out before most others can.

LOVE (NOT) HOW THE WEST USES WORDS LIKE FREEDOM, LIBERTY, RIGHTS, HAPPINESS……….FREEDOM TO BE STUPID, LIBERTY TO BE PROMISCUOUS, THE RIGHT TO BE WRONG ( ALL THE TIME) AND HAPPY TO BE ALL THIS SHIT ALL THE TIME!!!!!!!!!!!!!!AS A WESTENER WHO CARRIES BOTH OF THESE DANMED BLOOD LINES IN ME ( GERMAN and ITALIAN) I WOULD LIKE TO APOPLOGIZE TO THE RUSSIAN CIVILIZATION FOR NAPOLION, HITLER AND NOWW THE ENTIRE WESTERN WORLD FOR ALL WE HAVE COMMITED AGAINST YOU..IT IS A WAR BETWEEN SLAVIC AND “ARIAN”…GREEK ROMAN SHIT CULTURE AND SLAVIC EXCELENCE!!!!!!! GIVEN THAT WE CAME UP IF BRAD AND CIRCUS…IS ANYONE SURPRISE THAT WE HAVE, BIDEN,BLINKEN,MERKEL, MACRON, SCHOULS, BORIS( JOHNSON) AND ALL THE REST!!!!!!!!!!!!!!!!!!SLAVA ROSSYIA!!!!!!!!!!!!!