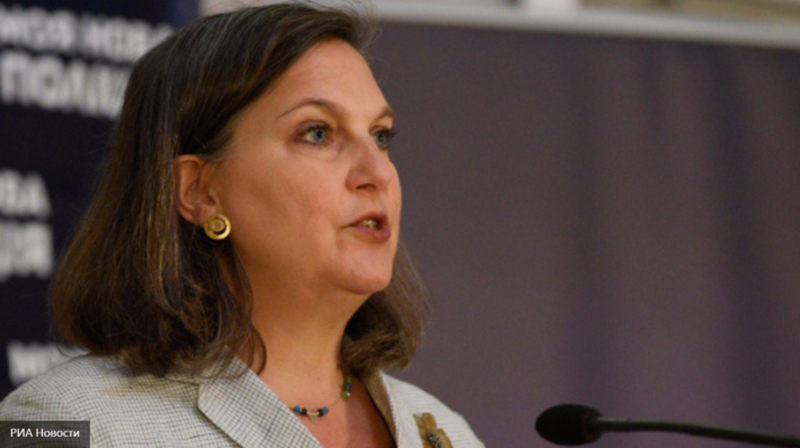 The first paper to report the  rumored meeting between Vladislav Surkov and Victoria Nuland was the Alisher Usmanov group-owned  Kommersant newspaper which cited “informed sources.” This news was instantly picked up by Kiev-controlled media. The main question being: what does that mean?

In the second half of the day it became known that the working meeting between Presidential Assistant Vladislav Surkov and Assistant Secretary of State Victoria Nuland took place in a presidential administration building in the city of Pionerskiy near Kaliningrad. These details were made known by Russian MFA representative in Kaliningrad, Pavel Mamontov.

“We can confirm the meeting had begun,” TASS cites Mamontov.

We know that last year Nuland met several times with the Deputy Minister of Foreign Affairs Grigoriy Karasin who is responsible for Ukrainian affairs. We also know that Surkov is the main coordinator of Russian policy toward the unrecognized republics. The meeting took place behind closed doors and no announcement as to why the meeting took place and, especially, about its results, will not be made. There will be only generic phrases on future implementation of Minsk Agreements and “normalizing the situation in Ukraine.”

The goal here is clear enough. Kiev junta’s media panic is wholly appropriate. As well as junta’s panic. The Poroshenko regime is gravely concerned that Washington and Moscow come together–but not with Moscow coming around to the point of view of Washington, which from the start was skeptical about Minsk (since we weren’t invited, nothing will come of it).

Donbass understands that too. “We have no specific expectations toward that meeting. The US will not influence Ukraine’s implementation of Minsk Agreeements,” Vladislav Deynego, LPR representative at Minsk negotiations told Interfax.

Nuland’s words support that interpretation. Today, before flying out to meet Surkov, she said in an interview by BNS:

“The first challenge is to stop killing of people so that we can start working on other parts of Minsk Agreements, including the political resolution, genuine elections in accordance with Ukrainian legislation which correspond to OSCE standards, the withdrawal of foreign military equipment and restoring border control.”

Nuland said that non-fulfillment of Minsk would mean freezing the Donbass conflict, which means a constant danger of a new war.

“We all ought to work to realize Minsk, otherwise we will have a frozen conflict or, worse, a constant threat to Ukraine and ourselves,” Nuland said.

These general phrases conceal a mortal threat not simply to Poroshenko’s regime but the whole junta which relies on armed force and the ideology of Banderite nazism. The junta does not need peace. Especially peace in which Lugansk and Donetsk are not only part of Ukraine where they enjoy enormous autonomies, but also contain millions of voters who hate oligarchs who supported the armed coup and the Banderites who have been trying to break the people of the Donbass for the last two years.

Theh short life of the formally independent Ukraine has shown that the openly Russophobic forces could come to power only through force. In 2004, Yushchenko managed to ascend the throne thanks to the first (luckily bloodless) Maidan. At that time, the regionals under Yanukovych’s leadership simply ignored the protests from the Russian part of Ukraine in exchange for ability to participate in the government. Naturally, even when he was Yushchenko’s PM, Yanukovych pursued the regime’s pro-Western policies.

Its results were pathetic. By 2010, Yushchenko’s popularity was near zero, and he was able to win only 5% of the vote in spite of his “incumbent’s advantage.”

The second Maidan was intended from the start to be bloody, with a civil war to follow. In order to keep the country under control using force. So far they’ve managed. But implementing Minsk means the betrayal of junta supporters’ Russophobic ideals, the seneselessness of all sacrifices and deaths, the end of the hope to become part of the EU. For the opponents of the Banderite regime, a transition to peacetime means the ability to resume peaceful protests, to vote for leaders of their choosing who are currently in exile, who are fighting against the regime on the Donbass, or sit in prison. If genuine peace breaks out, any Russophobic regime in Ukraine which contains the rebellious Donbass is doomed.

Hence the interest with which Ukraine’s media await the results. Particularly since only three days earlier Poroshenko met in Kiev with Russia’s representative to the trilateral contact group Boris Gryzlov. While Poroshenko denied the meeting, it’s obvious that Russia is continuing its active political pressure on Kiev. Which is successful, as evidenced by Biden’s visit a month ago, when his speech before the Rada caused genuine “shock and awe” among the junta’s leadership.

Biden cited the US Civil War as an example. And said that the US example, its federal system, should be a lesson and an example to Ukraine. After that the junta-controlled media long tried to explain that Obama’s special emissary was “incorrectly understood.”

No, he was understood just fine. No matter how  you call the maximum possible regional autonomy, the point is clear–the US took the “separatists” side, from Odessa to Kharkov, who have demanded autonomy since the first day of the coup that brought Kiev under the Banderite neo-nazi control.

To shoot oneself or suffer some more

The Surkov-Nuland meeting should bring the two countries which determine Ukraine’s destiny closer. Naturally, there will be other meetings, the process will be long and difficult, and lethal for many in Ukraine. It’s clear that Kiev has a choice to either shoot itself in the head or suffer a bit longer.

The Surkov-Nuland meeting is also interesting in that it answers two other questions. The Kiev junta media frequently accused Surkov of the crimes on the Maidan, of lobbying Russia’s interests in Kiev, and of directing the DPR and LPR internal politics.  Nuland was always his polar opposite. It is she who arrived on the Maidan while the armed coup was being prepared in order to support the militants with the now-infamous cookies.

The fact that these two people were selected suggests the gap between Russia and US is closing.

The fact of Surkov’s participation indicates that “the rumors of his (political) death were somewhat exaggerated.” Yes, after the whole series of events in Moscow, Donetsk, and Lugansk last fall it became clear that Surkov is hardly the “power behind the throne” in DPR and LPR who does whatever he wants. That myth collapsed together with the “Surkov’s propaganda” fairy tales.

Surkov is the same individual he has been since the late 1990s: an effective manager of the highest caliber who is at his best under extreme pressure when the situation demands non-standard and adventurous decisions that sometimes skirt the line. He never defined, does not define, and will not define the aim which he is pursuing. He is a precision-guided missile which strikes the assigned target. And which decides how to maneuver, how to avoid interception, on the way to target. No more and no less.

What target he was assigned this time is already more or less clear. It’s what Putin said on many occasions: “preserving a friendly, brotherly, unified Ukraine.” How Surkov approaches that target will soon become clear. But we can be absolutely certain that the rulers in Kiev will not like it at all.

Tags:russia, ukraine, us, war in ukraine

Great to see your work, J Hawk. Miss you on FortRuss.

Surkov is so hate-able by everyone. Perhaps that is why Putin uses him.

Matching up with the reprehensible Nuland is an odious scene to imagine.

But wouldn’t it be sweet to see video of this meeting. Nuland having to accept the personal courier of Putin, feeling the immovable, facing the burden of extinguishing your seven year old monster (five years in the womb and two years of spraying death and mayhem in Donbass.) Nuland must be in constant pain. I read the meeting was more than 6.5 hours.

And no sideways moves, no tango, no shifting around with the hard-coding of Minsk 2. Putin insists on Constitutional change, federalization (better yet confederation), and he has already postponed the elections until April. That is when the guillotine drops for Kiev. There will be no more postponing.

And as for more war, Putin has clearly told Obama, Porky, Kerry, Merkel and Hollande that the next round will be the deadliest, He certainly will insert a force and weapons that will be the coup de grace to the ATO.

Facts on the ground do not really matter. Putin has reached his limit of patience.

We see in Syria what that means. We saw how Russia reacted against Turkey and the Turkmen zone after the jet bomber was shot down and the pilot murdered as he parachuted.

Kiev and Nuland know RF force will enter Ukraine in the next round and end this proxy war.

Getting out now leaves the US with a possible shell nation from which they may later try some other destabilization against Russia. Allowing the junta to make more war is not an option.

And the language of the Constitution is being dictated to Kiev, via Nuland through Surkov from the desk of Putin.

He will have it no other way.

Two reasons why I like Putin. He is trying his best to look after his people and you might not agree with all of his policies but you have confidence that he means what he says and he will do what he says. Is there anyone in the West like this…..no is the answer.

When you are forced to meet with Surkov you instantly know that you have messed things BIG TIME!!!