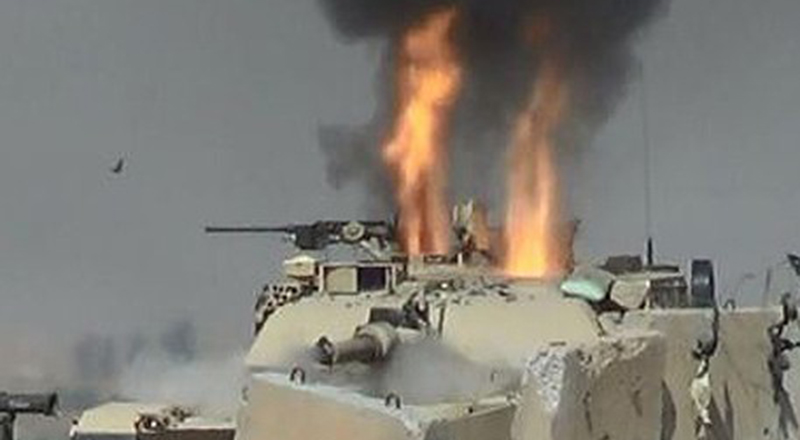 Original by Dmitriy Yurov published by Zvezda; translated from Russian by J.Hawk
Operations “Decisive Storm” and “Rebirth of Hope” which are being conducted in Yemen by an Arab coalition have noticeably bogged down. The absence of major successes, numerous personnel losses, destroyed armored vehicles, very poor coordination–those are a few of the reasons behind one of the most disastrous military operations in the Middle East.
An Army for Show
The majority of experts considered the coalition invasion of Yemen a poorly thought through operation, and even the first clashes with the Houthi rebels, who were hastily armed and whose command and control was an order of magnitude less effective than that of a regular army, demonstrated that the Saudi-led coalition troops are not prepared to fight. In spite of the decision to create yet another alliance, this time to fight ISIS in Syria, Saudi armed forces do not have sufficient experience to conduct a full-scale war, and the decisions made by local commanders only make their troops an easy target on the battlefield.
“When I read the book by the Saudi prince and general Khaled Ibn Sultan “Desert Warrior,” I noticed that the commanding officer was less concerned about the outcome of fighting but adhering to various ceremonial rules,” political military expert Aleksandr Perendzhiyev told Zvezda. He said that it would be premature to talk of high levels of professionalism in the Saudi military, since neither the soldiers nor the commanders received proper training, and all of its operations are mainly for show. The motto of such an army, according to Perendzhiyev, could very well be “we have to fight but must not win!.” Moreover, the Saudi army has certain rituals which may delay adopting decisions on the battlefield. “At their meetings it is crucial to determine who sits where, and how tall their stools are. It is also important who reports to whom and how the report is made, they are extremely sensitive on all matters of subordination: a superior commander does not want to be reported to by a junior officer,” Perendzhiyev explains. Similar peculiarities can be encountered in how information is disseminated. Some commanders do not want receive reports by communications systems and prefer personal reports.
Armored targets
The low level of personnel training and poor coordination on the battlefield led to yet another problem which could be observed on many occasions: the disproportionately heavy armor losses, and the low level of effectiveness of tank crews which, according to specialists, is close to zero. Specialists note that even though Saudi forces use US weapons, they have nothing in common with US tactics. The contrast with US armor operations in Iraq is colossal. US forces in Iraq moved rapidly from area to area, spending minimum time at a halt during offensive operations. Saudis don’t operate like that. Instead there is evidence of complete incompetence, absence of decent coordination which allow the Houthi to use Soviet-era anti-tank missiles like the Fagot/Faktoriya and Konkurs to destroy M1 Abrams tanks from safe ranges.
“If in Iraq the US tankers were mostly worried about RPG fire from a few dozen meters, in Yemen the combination of mountainous terrain and poor Saudi training have created a situation in which Saudi flaws are instantly exploited by the opposition armed with highly effective Soviet-era missiles. Numerous video clips show that even aged weapons can take out a US tank in a matter of seconds,” says  Russian Army retired captain Aleksey Fedyukin, a specialist on military-technical cooperation.
War for some, money for others
The commercialization of combat operations is at least as important, according to specialists, as religious, political, and other factors behind that war. The low effectiveness of Saudi airstrikes is but one component of the new commercial war. In the best traditions of US bombings, the Saudis managed to destroy a local hospital that was being used by Doctors Without Borders, a wedding procession, and a number of important civilian objects. Even though the coalition HQ in Riyadh regularly receives coordinates of important civilian targets that should not be bombed, such errors continue. The Arab coalition also lacks sufficient personnel to maintain order on occupied territories, which is why Saudi Arabia is actively involving third parties in the war: Colombia, Morocco, Sudan, Senegal, Jordan. These countries eagerly send their mercenaries who fight for whoever pays them. However, the mercenaries won’t make much of a difference because there are even fewer people willing to risk their lives among them than people who believe that fighting on behalf of Gulf monarchies is their duty. Moreover, Saudi military is plagued by corruption which is becoming more and more difficult to conceal. “It has reached the level of Saudi commanders being bribed to issue certain orders and to delay reporting results of operations,” Perendhziyev explains. Given corruption on that level, one should not be surprised that coalition troops sell their weapons which they report as having been destroyed in battle. Experts predict that if the current level of conflict and external support is sustained, Yemen could in near future become another Iraq, Libya, or Syria, and the escalating conflict will not contribute to Middle East’s stability.

….unless you know what happens on a daily basis. Quit spreading bs.

Oh gheez…look !!!…someone who cares about the destruction of other people’s lives and the land posting to me…..you do care right ???

Trying to figure out the Pals and the Jews is like trying to figure out what dark matter is. We have enough problems with the elite owning our western newspapers and news channels feeding us bs for last 40 years. Some day that area will all be looked after one way or another, it’s just that right now, well lets just say, we have enough china ware on the table right now….lol…that’s kind of a pun.

Trying to figure out the Pals and the Jews is like trying to figure out what dark matter is. We have enough problems with the elite owning our western newspapers and news channels feeding us bs for last 40 years. Some day that area will all be looked after one way or another, it’s just that right now, well lets just say, we have enough china ware on the table right now..lol…that’s kind of a pun.

Hello and thx for this useful information.The destruction of the tank could not be only explained by the incompetence by saudis, even though indeed it is the case. The soviet anti tank missiles, as long as the anti tank rockets are extremely redoubtable too. In these following photos, iraqi insurgents destroyed several US M1 Abrams during the occupation between 2003-2010. The first photo was due to an anti tank missile fired by Iraqi army in april 2003-must be an AT-5 Spandrel, or AT-4 Spigot- , it shows you that soviet/russian anti tank missiles are extremely lethal, regardless which army is.