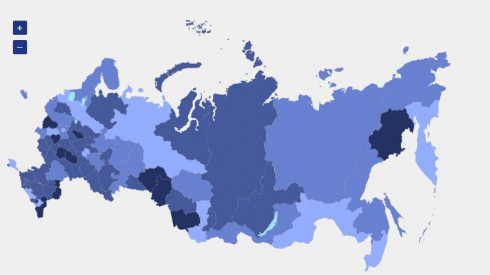 Original by Aleksey Volodin published by topwar.ru; translated from Russian by J.Hawk

It’s late December. It’s time, as they say, to draw conclusions. Given the avalanche of major international events and developments, it would be inappropriate to ignore what’s been happening in Russia’s regions during the year. It would be inappropriate because Russia is a federal country and national interests, including economic, are a kaleidoscope of regional interests. Just as national successes and failures are first and foremost a reflection of successes and failures of each individual Russian region.

Keeping in mind the old truth that there are lies, big lies, and statistics, it’s nevertheless worthwhile to turn to official stats. If only because official stats are the only source of relevant information. One has to hope that the old truth mentioned above does not apply to the data presented below. Especially since nobody has voided the right to hope…

So here are a few, and I’d like to think, interesting, economic statistics concerning Russia’s regions at the end of the year.

On the basis of Federal Labor and Occupation Service (Rostrud), the Ministry of Labor and Social Protection, and the Federal Management Portal, we are presenting a multi-layered rating of Russian Federation’s regions. The rating was compiled using several factors, including: average salary, unemployment rate, price levels, housing availability for various categories of citizens, regional economic trends (rate of growth or decline), the availability of pre-school education (kindergarten availability).

Let’s start with the regional economic trends. As a reminder, Russia’s national economy shrunk by approximately 3.4%. The official prediction made by the IMF for 2015 was that it would shrink by 3.7%, while the Ministry of Economic Development predicted 3.4%. But what about the regions?

Ingushetia and Tambov made it to the top for the first time, likewise Dagestan made it into the top five for the first time as well. It’s the first top showing for Sevastopol, which also appears in the rating for the first time.
Here one can allow a bit of levity, stating that the head of Ingush Republic Yunus-Bek Evkurov can enjoy the fact he left his neighbor Chechnya (-1.5%) far behind, and that Ingushetia even left China far behind. It would seem that there are some statistical wizards in Magas, but then again perhaps there’s no need for irony if Ingushetia really did manage to achieve such impressive indicators.
Perhaps some of the readers will, after reading these numbers, say they are crap and that the author is making stuff up and want to throw rotten eggs and tomatoes at him…But, as noted above, those are the results presented by Rostrud and Mintrud. Whether one should take them seriously is up to each reader.
What about the underperformers? From the same rating:
Crimea (-5.5%), Vologda (-4.1%), Kemerovo (-3.7%), Kaluga (-2.6%), Maritime Province (-2.3%), Komi (-2.3%).
Moscow and St. Petersburg are at around zero. Moscow’s economy shrank by .1%, while St. Pete shows an exact zero.
It’s striking how differently Crimea and Sevastopol performed. While Sevastopol is toward the top, Crimea is the absolute worst performer. One could blame it all on anti-Crimea sanctions, but then how to explain Sevastopol? Or maybe one should dig deeper than the sanctions regime?
What about employment?
The top performers are: Moscow (1.8% unemployment), St. Petersburg (2%), Samara (2.5%). The worst performer is, “suddenly”, Ingushetia (30.6%).
The question practically asks itself–how is it possible for a republic with that kind of unemployment ro achieve economic growth of 11.3%? How could a leading region be the worst when it comes to unemployment? Thus we find out that statistics are a marvelous thing…One can assume that federal subsidies play a role here, except that Crimea did not get less than Sevastopol yet it suffered a drop in the economy and has an unemployment rate of 6%, which is the same as Russia’s average. Could it be that Simferopol did not know how to use the resources provided by Moscow, hence the indicator…
When it comes to prices, Kamchatka is the undisputed leader (22,400 rubles for a fixed basket of goods), followed by Chukotka (20,800) and Magadan (19,500).
Moscow is also above average at 14,680 rubles. And the “cheapest” region is Sevastopol (10,900 rubles).
Housing is most easily affordable (as defined by the average cost of renting a single-bedroom apartment for a month) in Orel Region (7100 rubles),  Kursk (7200), and Penza (7200). Housing is most expensive in Sakhalin, Moscow, and the Nenets Autonomous District. Granted, here too the stats are interesting. For example, the reported cost of renting a one-bedroom apartment costs 26,700 rubles. But if one is to survey web sites offering rental assistance, the prices tend to be higher by 2-3 thousand.
Regions with lowest kindergarten availability are Stavropol, Krasnoyarsk, Karachayevo-Cherkesia, and North Osetia-Alania. The highest availability was noted in Vologda, Vladimir, Novgorod, Arkhangelsk, Chukotka, Sakhalin, and the Maritime Province.
These indicators give a lot of food for thought. Thought about the degree to which official statistics coincide with real ones, if one had the ability to compare them across the country?