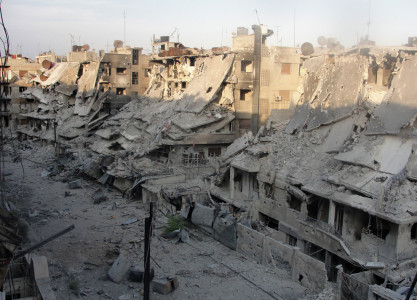 Day and night, for years, an overwhelming force has been battering this quiet nation, one of the cradles of human civilization.

Hundreds of thousands have died, and millions have been forced to flee abroad or have been internally displaced. In many cities and villages, not one house is left intact.

But Syria is, against all odds, still standing.

During the last 3 years I worked in almost all of Syria’s perimeters, exposing the birth of ISIS in the NATO-run camps built in Turkey and Jordan. I worked in the occupied Golan Heights, and in Iraq. I also worked in Lebanon, a country now forced to host over 2 million (mostly Syrian) refugees.

The only reason why the West began its horrible destabilization campaign, was because it “could not tolerate” Syria’s disobedience and the socialist nature of its state. In short, the way the Syrian establishment was putting the welfare of its people above the interests of multi-national corporations.

More than two years ago, my former Indonesian film editor demanded an answer in a somewhat angry tone:

“So many people are dying in Syria! Is it really worth it? Wouldn’t it be easier and better for Syrians to just give up and let the US have what it is demanding?”

Chronically petrified, this young woman was always searching for easy solutions that would keep her safe, and safe with significant personal advantages. As so many others in this time and age, in order to survive and advance, she developed a complex system resting on betrayals, self-defenses and deceptions.

How to reply to such a question?

It was a legitimate one, after all.

Eduardo Galeano told me: “People know when it’s time to fight. We have no right to tell them … but when they decide, it is our obligation to support them, even to lead them if they approach us.”

In this case, the Syrian people decided. No government, no political force could move an entire nation to such tremendous heroism and sacrifice. Russians did it during World War Two, and the Syrians are doing it now.

Two years ago I replied like this: “I have witnessed the total collapse of the Middle East. There was nothing standing there anymore. Countries that opted for their own paths were literally leveled to the ground. Countries that succumbed to the dictates of the West lost their soul, culture and essence and were turned into some of the most miserable places on earth. And the Syrians knew it: were they to surrender, they would be converted into another Iraq, Yemen or Libya, even Afghanistan.”

And so Syria rose. It decided to fight, for itself and for its part of the world.

Again and again, it retained itself through the elections of its government. It leaned on its army. Whatever the West says, whatever the treasonous NGOs write, the simple logic just proves it all.

This modest nation does not have its own powerful media to share the extent of its courage and agony with the world. It is always the others who are commenting on its struggle, often in a totally malicious way.

But it is undeniable that whilst the Soviet forces stopped the advance of the German Nazis at Stalingrad, the Syrians have managed to stop the fascist forces of Western allies in its part of the world.

Of course Russia got directly involved. Of course China stood by, although often in the shadow. And Iran provided support. And Lebanon-based Hezbollah put up, what I often describe as, an epic fight on behalf of Damascus against the extremist monsters invented and armed by the West, Turkey and Saudi Arabia.

But the main credit has to go to the Syrian people.

Yes, now there is nothing left of the Middle East. Now there are more tears than raindrops descending on this ancient land.

But Syria is standing. Burned, wounded, but standing.

And as is being widely reported, after the Russian armed forces came to the rescue of the Syrian nation, more than 1 million Syrian people were able to return home … often to encounter only ashes and devastation, but home.

So what would my answer be to that question now: “whether it would be easier the other way”, to surrender to the Empire?

“Life has meaning, it is worth living, only if some basic conditions can be fulfilled. One does not betray great love, be it love for another person or love for one’s country, humanity or ideals. If one does, it would be better not to be born at all. Then I say: the survival of humankind is the most sacred goal. Not some short-time personal gain or ‘safety’, but the survival of all of us, of people, as well as the safety of all of us, humans.”

When life itself is threatened, people tend to rise and fight, instinctively. During such moments, some of the most monumental chapters in human history are written.

Unfortunately, during these moments, millions tend to die.

But the devastation is not because of those who are defending our human race.

It is because of the imperialist monsters and their servants.

Most of us are dreaming about a world without wars, without violence. We want true kindness to prevail on earth. Many of us are working relentlessly for such a society.

But until it is constructed, until all extreme selfishness, greed and brutality are defeated, we have to fight for something much more “modest” – for the survival of people and of humanism.

The price is often horrible. But the alternative is one enormous gaping void. It is simply nothing – the end, full stop!

In Stalingrad, millions died so we could live. Nothing was left of the city, except some melted steel, scattered bricks and an ocean of corpses. Nazism was stopped. Western expansionism began its retreat, that time towards Berlin.

And the Syrian people have won. For how long, I don’t know. But it has proven that an Arab country can still defeat the mightiest murderous hordes.