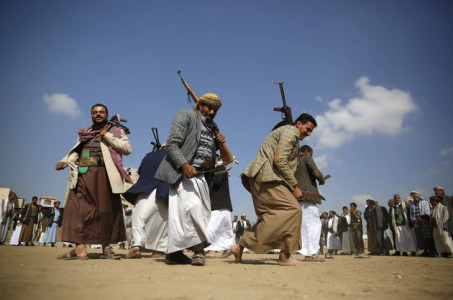 Nearly six days ago a ceasefire agreement was to be in place but due to unprovoked airstrikes by Saudi forces the ceasefire fell apart. Yemeni forces have fought back with major offensives in Saudi Arabia and launching strikes with the use of ballistic missiles such as the one which struck the Saudi airport today.

Russian capital flight dropped from 150 2014 to 60 billion 2015 . Russian oil exports and gas exports only make Western economic system strong, The war in Mideast may take out Saudi Arabia with ballistic missiles. Yemen is testing ground for Tochka and Hwasong missiles. Initially Patiot anti missiles systems were effective at stopping ballistic missiles.Now the Ballistic missiles have overcome Patriot system with massive casualties on Saudi in Yemen. The Saudi UAE systems use patriot even at home. Ballistic missile attacks on Saudi homeland and bases throughout Saudi homeland are real possibility. All US allies and many foreign bases use Patriot system meaning they are all vulnerable to attack. New S400 patriot systems installed near Damascus will study stealth fighter reflection patterns in Israel Air Force. Oil price will rise if Russia DPRK Iran and Yemen destroy oil supply of US gulf allies that rely on Patriot system.The Saudi are now portrayed as evil and ally of Turks in Russian media. Saudi is well known enemy of Iran. A proxy is needed to start war likey Yemen armed with longer range DPRK missiles. Successful use of ballistic missiles made in Russia and DPRK will promote international sales. Setting up hundreds of US foreign bases will become difficult when bases can be destroyed by ballistic missiles for sale on open market. Whether its carriers or foreign bases balistic missiles that overcome ABM systems can wipe them out. That is why the Patriot ABM conflict with Hwasong missiles is so important to follow. Of coarse if the war head is nuclear the target would be much more devastated. Clearly DPRK Hwasong with nuclear warhead can have devastating consequences. The conflict between Hwasong ballistic missiles and Patriot ABM is one of the most important in Mideast. The Saudi capital could become targeted with longer range Hwasong. Houthi occupied Saudi territory could be launching point for attacks on Saudi capital or other military bases. The Yemen war is a test bed for new missile technologies. DPRK Hwasong show dramatic improvements and effectiveness. The lessons learned can be applied to nuclear warheads.

Why do you need to test “Tochka”? They are a very old system.

It is likely the ones that did not penetrate Patriot ABM were old system. The missiles that overcome the Patriot and are accurate are likely GPS plus inertial guidance .The Patriot ABM system may be overcome in at least 3 ways potentially:1. Steerable missile that changes direction frequently. 2.radar absorbent material. 3 decoys. Russia Iran DPRK China need to discover ways to defeat Patriot System. They can not rent a Patriot ABM system . But they can test new approaches to defeating the Patriot System in Saudi Arabia . It is a valuable learning opportunity. They are likely to use it to fullest. The knowledge will make new missiles improved and better at defeating Patriot ABM system used around the world.

Any Mouse
Reply to  Shhh

Moscow nor Beijing has lift even a finger for the Yemeni people in the UN, never mind supporting their defence against an illegitimate agression.

Not even with food and water.

Shhh
Reply to  Any Mouse

During one attacks on Saudi. A Patriot battery was destroyed.Fifty percent of big scores by Houthi missiles came from December 14 – Dec 21. After months of launches they became successful against Patriots. Did the Houthi do it on their own or get new improved weapons ….and from what country did support come?

I think you are right . The data gained in Yemen ballistic attacks against Patriot system will be used to improve r500 or Kalibr cruise missile. If R500 or Kalibr cruise missiles are sold to Yemen ,Yemen will have range to attack Saudi and its allies infrastructure and military targets within at least 2500 kilometers. Kalibr has decoys radar reflection reduction and terminal velocity changes. The G turn performance, radar system , and decoy identification of Patriot system missiles can be tested with ballistic missiles before the Kalibr is deployed to Yemen. At 2500 KM all gulf allies of Saudi Arabia including Turkey are in range of Yemen.