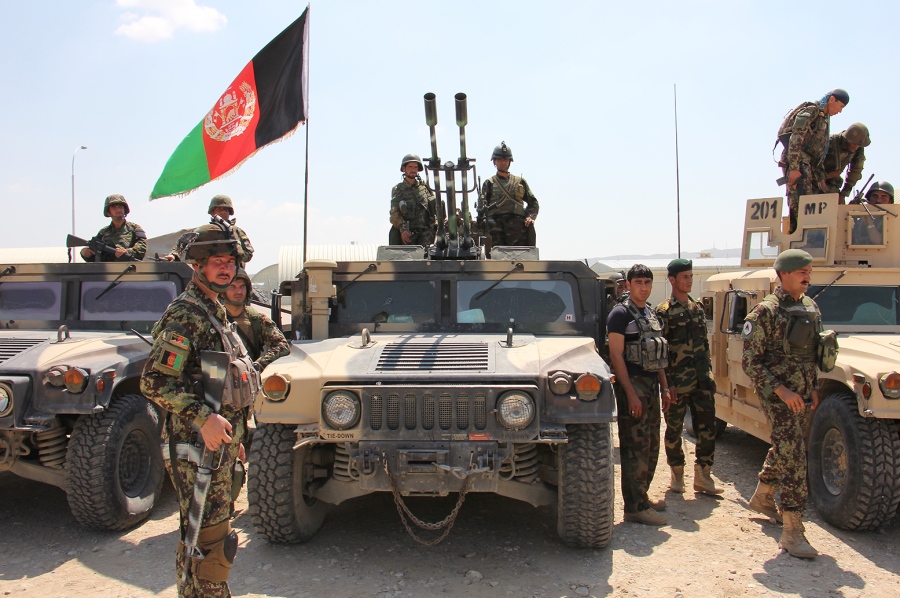 The Afghan National Army (ANA) had killed 118 militants of the Taliban and had wounded 30 others in a series of operations in different parts of the country, the Ministry of Defense of Afghanistan announced on April 29.

According to the MoD, four individuals affiliated with the militant group were also apprehended by the ANA during the operations.

“In addition, 169 IEDs which were placed by the Taliban on public roads were discovered by the ANA,” the Afghan MoD added in its statement.

Later, the Afghan MoD announced that 13 Taliban fighters, including 4 Pakistani nationals, had been killed in an attack by the ANA on their hideout in the Barmal district in the province of Paktika.

Despite the ongoing withdrawal of US troops from Afghanistan, the battle between government forces and the Taliban appears to be heating up.

US troops will be out from Afghanistan by September 11. If the government and the Taliban fail to agree on a workable political settlement before this date, the situation in the country may explode. The US is ignoring this threat.

Wow, such a strong army….

Let’s be fair and look at both side and compare them…huh.

The pashtu talibunny have no chance to fight a huge well equipped ANA. The future of talibunnies is like that of Daesh. If they persist in fukking around, the 70% Persian speaking Afghan majority population will deport them to Pakistan.

Before the US invaded from the north after 9/11 the Taliban controlled 90% of Afghanistan after defeating every other group that fought the Russians apart from Massouds group in the far north by Uzbekistan . They will again defeat anyone that opposes them regardless of how well armed they are. The US with all their might couldn’t defeat them for 20 years of trying. The ANA will run for the hills when confronted . I was watching events in Afghanistan from when the Russians were there . The Taliban did not fight the Russians contrary to popular belief. They were all in religious schools in Pakistan and only came out after the Russians left. The various groups were fighting each other over control of Kabul when the Taliban came in and attacked them all kicking them out of Kabul. After that they slowly took over parts of Afghanistan until there was only Massouds , The Lion of the North , holding out. They sent in a camera crew with a weapon hidden in the camera and shot and killed Massoud just before the Twin Towers. It would have been just a matter of time and they would have controlled the whole country but the US Special Forces joined up with Massouds group and on horseback started the invasion of Afghanistan .

Did they also include the Taliban losses for that month for an indicative idea of the ratio. Obviously that will change month to month but to have killed 118 and wounded 30 ??? normally it is 2 to 3 wounded per 1 killed , the Afghan forces would have suffered similar losses , unless the Taliban died of shock at the announcement of the US withdrawl.

@ Potato Man ..The above reply was for Potato Man but this new system doesn’t connect comments like Discus did. Just have to adjust

@John Wallace, FYI, the Pakistan Army was fighting alongside the talibunnies, that’s how they beat the other factions. Not by some super natural miracle they won. 80k cannon fodder pashtu refugees in Afghan refugee camps were trained/ indoctrinated and sent to fight as talibunnies by Pakistan army. This is not possible now since the US has a tight grip on Pakistan economically via the FATF/ IMF facility ($115 billion and counting in debt). The US can dismantle a weak Pakistan with the stroke of a pen.

@ Ahson . Thanks ,I wasn’t aware of the Pakistani involvement . Anyway we shall see what evolves once the US pulls out. ( IF? )

They won’t John…….they got a front row seat overlooking the entire southern BRI node. Eric Prince’s 18,000 XE PMC death squads will sit at Bagram/ Shindand/ Herat and Kandahar providing backup to the ANA for those brutal night time raids. All the talibs can do is suicide bombings……they’ve been relegated to a low status like daesh, only popular in the eastern pashtu provinces bordering Pakistan. The rest of the country is all Persian speaking and doesn’t tolerate them. They just face a bleak future, much like the Sunni’s in Iraq.