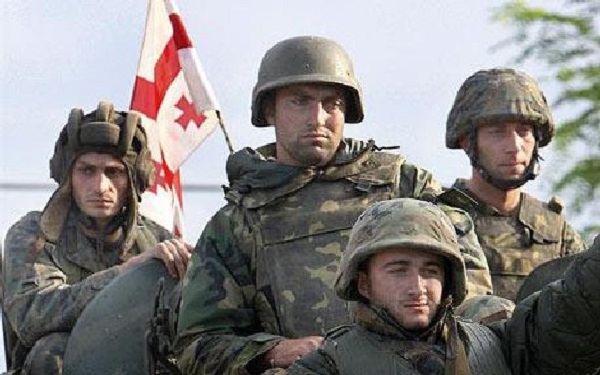 The Russian Foreign Ministry’s comment on “the 10th anniversary of the August 2008 events in the Caucasus” (source):

Ten years ago, on the night of August 7-8, 2008, the Government of Mikheil Saakashvili in Georgia breached the agreement on a peaceful settlement of the Georgian-Ossetian conflict by launching a full-scale military operation against South Ossetia.

Georgia’s aggression against Tskhinval, which has been universally recognised as a party to the conflict, had not been provoked in any way. Under the 1992 agreement signed between Russia and Georgia in Sochi, security in South Ossetia was maintained by the Joint Peacekeeping Forces (JPKF), comprising three battalions from Russia, South Ossetia and Georgia. There was also a Joint Control Commission comprising Russia, Georgia, North Ossetia and South Ossetia. Despite Georgia’s repeated attempts to revise the Sochi agreement, at the time of the conflict the Russian peacekeepers were deployed in South Ossetia legally within the framework of an internationally recognised settlement mechanism. OSCE observers had also been deployed in South Ossetia since 1992.

As for Abkhazia, it was officially recognised a party to the conflict in the documents adopted by the UN Security Council, including Resolution 1808, one of the recent documents adopted on this issue. A UN Observer Mission was deployed there alongside the CIS Collective Peacekeeping Force.

Late at night on August 7, Georgian forces launched a large-scale artillery attack on Tskhinval, which lasted until the following morning. Georgian General Mamuka Kurashvili announced in a televised statement that “Georgia has launched an operation to restore constitutional order in South Ossetia.” Georgia’s Grad multiple launch rocket systems stationed around Tskhinval shelled the South Ossetian capital, making no distinction between military and residential targets. On August 8, the Georgian army, supported by tanks and armoured vehicles as well as the special operations forces of the Interior Ministry, entered Tskhinval.

The Georgian attacks devastated Tskhinval. The majority of residential blocks were razed to the ground or damaged. The city’s utility and other critical infrastructure as well as industrial facilities were damaged, along with several villages near Tskhinval.

In light of direct threat to the life of Russian citizens in South Ossetia, the Russian leadership decided to launch an operation to enforce peace on Georgia.

The fact that it was Georgia who launched the aggression was later officially confirmed, including in the report of the Independent International Fact-Finding Mission on the Conflict in Georgia, which was established by decision of the Council of the European Union and chaired by Heidi Tagliavini from Switzerland. The report was published in autumn 2009.

The participation of the Russian armed forces in repelling the attack on South Ossetia was legitimate and in keeping with the right of self-defence as stipulated in Article 51 of the UN Charter. The Russian Federation used its armed forces in response to a large-scale Georgian attack on the Russian peacekeeping units that were deployed in South Ossetia legally and with Georgia’s permission. As per Article 51 of the UN Charter, Russia notified the UN Security Council of the application of the right of self-defence.

The Russian military operation in South Ossetia was launched solely to stop the Georgian aggression and to prevent a recurrence of aggression. The planning and implementation of that operation was strictly commensurate to the threat from Georgia. Upon completing the operation, the units of the Russian Armed Forces taking part in it were pulled back from Georgia in October 2008 in accordance with the principles for a settlement of the conflict coordinated by President of Russia Dmitry Medvedev and President of France Nicolas Sarkozy (the Medvedev-Sarkozy six-point plan, which is often mistakenly referred to a ceasefire agreement) and the subsequent agreements of September 8, 2008.

On August 26, 2008, Russia recognised the independence of South Ossetia and Abkhazia in keeping with the relevant provisions of the UN Charter, the 1970 UN Declaration on Principles of International Law concerning Friendly Relations and Co-operation among States, the 1975 Helsinki Final Act of the Conference on Security and Cooperation in Europe and other fundamental international documents. The attack on South Ossetia and preparations for a similar operation against Abkhazia, which were the final stage of Georgia’s years-long policy of coercion against these nations, left them with no other option than to protect their security and the right to existence by proclaiming their self-determination as independent states.

By recognising the independence of South Ossetia and Abkhazia, Russia also assumed responsibility not only for their security but also largely for their development as modern, democratic and socially and economically prosperous countries. The establishment of diplomatic relations with them on September 9, 2008 and the signing of the Treaties of Friendship, Cooperation and Mutual Assistance on September 17, 2008 provided the basis for Russia’s active interaction with Abkhazia and South Ossetia.

On September 8, 2008, the presidents of Russia and France approved their plan of August 12, which set out six principles for the settlement of these conflicts. Based on this plan, a new international format on stability and security in the South Caucasus, the Geneva International Discussions (GID), was launched on October 15, 2008. This event formalised the new political and legal realities that developed in the region following the Georgian military operation, much as some forces would like to present this in a different light. It has been agreed that representatives of Abkhazia, Georgia, South Ossetia, the EU, the OSCE, the UN, Russia and the United States will be equally represented at the Geneva discussions as direct parties to the settlement that are interested in maintaining stability and security in the South Caucasus. The EU, the OSCE and the UN co-chair the Geneva discussions by agreement between the parties.

The main lesson of the 2008 tragedy is that it is senseless and counterproductive to try to use force to settle international disputes or conflicts, especially when the issue concerns the complex and delicate sphere of ethnic relations. The use of violence in such cases can only have the most painful and sometimes irremediable consequences. Over the ensuing period, Russia has been working in the South Caucasus to resume dialogue and comprehensive negotiations between Georgia on the one hand, and Abkhazia and South Ossetia on the other hand. The first step towards this goal could be the signing of non-use-of-force agreements. We hope that common sense will prevail after all.

a satanic war from starters….400+ israeli military “advisors” were in georgia before and during the war

also, the zionist state generously refurbished georgian stocks with SPIKE anti tank missiles before the war – although not a single kill from such system has been documented in literature on that war.

Just a hint to those that believe that some dozens, or even hundreds of JAVELINs may change the outcome of any war.

I didnt know that!

Didn’t help those “brave” Georgian soldiers, did it? They where doing good killing Osetian civilians right until Russians arrived on the scene. Army was still in shatters (after 90s) at that time in terms of material and equipment but mentally it still was Russian army and it showed.

The one pictured at the base of the group of 4 almost looks like Saakva-shitty himself.

Bastards also in Colombia training deathsquads and in Guatamala!

The difference between Russia and Zionatoyanquistani scum. Russia brought order back and left! American supported Turcos invaded Cyprus as a peace -keeping measure and never left! In fact they resettled the area with hundreds of thousands of their own people. Same as what they are doing to the invaded portions of Syria!eg Afrin

Imbecile georgians got put in their place.